Canadian Women’s National Team centre back Kadeisha Buchanan and Head Coach John Herdman and have been announced as shortlist nominees for the 2015 FIFA Women’s World Player of the Year and FIFA World Coach of the Year for Women’s Football awards.

Buchanan, 19, has risen quickly to become a backline staple on the Canada’s Women’s National Team squad. She was awarded with the Best Young Player of the FIFA Women’s World Cup Canada 2015™, hosted across Canada this summer.

It’s great to see Kadeisha gain more recognition after the FIFA Best Young Player Award,” said Herdman. “She showed her talent in the FIFA Women’s World Cup this summer, but she really has been a consistent performer for Canada since she pulled on the Women’s National Team jersey at 17 years old. This is a proud moment for us all and I am confident there is more to come.”

Having made her debut for Canada’s youth program at 14 years old, Buchanan has risen through the women’s development program and competed for Canada in both CONCACAF and FIFA youth competitions before making her FIFA Women’s World Cup debut at home this year.

Coach Herdman’s 2015 nomination for the shortlist of FIFA World Coach of the Year is his second, having been nominated in 2012 after Canada captured Bronze at the 2012 London Olympics.

“I share this nomination with the players, fans, Canada Soccer’s staff and the thousands of volunteers that made this summer’s tournament the biggest women’s sporting event the world,” said Herdman. “Canadians came together in support of the home team and showed pride in our team and our sport. Canada 2015 will forever be a defining moment in women’s sport and I am proud to have been part of it.”

Having hosted the most successful FIFA Women’s World Cup™ ever, Canada Soccer is continuing to ensure Canadian players are given the best opportunities to develop and deliver on and off the field.

“We are immensely proud of John and Kadiesha, and the hard work that has gone into getting to today,” said Victor Montagliani, President of Canada Soccer. “The future of women’s soccer in Canada is extremely bright. We are continuing to invest in the women’s game, ensuring Canada has a competitive edge by developing a high performance culture in our development program and aligning development goals with the National Team program. The future is bright, indeed.” 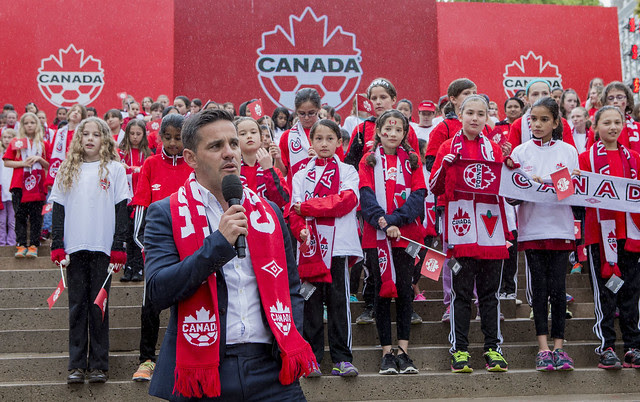