Turski, 27, one of the world’s most decorated slopestyle skiers, last competed for Canada at the 2014 Winter Olympic Games after making a surprising recovery from knee surgery.

“I needed to take some time off after the Olympics,” said Turski. “It was a pretty hectic road to make it there with everything I had to deal with my knee. It wore on me both physically and mentally. I decided to take a break for myself and recuperate. I wanted to settle down a little bit too and live somewhere instead of living out of a bag.”

Turski injued her right knee six months before the Olympic Games and required knee surgery to repair her ACL. Recovery time for such an injury is usually six month before an athlete can return to snow. But Turski returned in 3.5 months thanks to the recommendation of her surgeon, Dr. Robert Litchfield, who believed that a synthetic graft would have her on snow faster.

A few months later Turski would go on to win her eighth Winter X Games gold medal. However, Turski hit a bit of a speed bump in Sochi due to some pain returning in her knee and falling ill while she was there, ultimately finishing a disappointing 19th.

Another surgery would follow later in the summer of 2014 to clean up the knee. Turski kept herself busy during that time by taking university courses and training in the gym, and only returning to snow training in the winter to do some light skiing while avoiding jumps higher than 10-15 feet.

This past August, Turski travelled to New Zealand to train on snow with other members of the Canadian team, including Roz Groenewoud and Kim Lamarre. Turski had decided that if all went well she would end up competing in a FIS World Cup taking place at the end of the month. Turski ended up competing and making the final, finishing fifth overall.

“I went to New Zealand because I realized I wanted to get back to skiing,” added Turski. “It didn’t feel right that I wasn’t going to ski again. I focused on myself and ended up skiing pretty well. My knee felt good and I felt good. I was happy and it felt logical for me to keep going. I went to train there with a small chance of competing. I hadn’t jumped in a while and trained on the course for two or three days. That was the first time doing jumps since Sochi. To qualify for finals was validating. I hadn’t skied that kind of course in a long time.”

Turski’s long-term goal remains to qualify and compete at the 2018 Winter Olympic Games, but for now her focus is on this season and competing in events like the upcoming Dew Tour and the X Games in January.

“I think this is going to be a big training year for myself and many people on tour,” said Turski. “The X Games is the most important event for me this year. It has already brought out magic in the past. It’s the event where you expect everyone to bring their best performances. I’ve really thrived there and had a great run.” 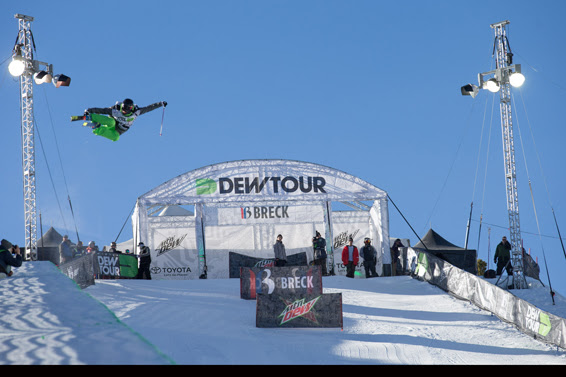 19 National Team Members to compete at the Dew Tour

A total of 19 Canadian Freestyle Ski Team members will be competing at the Dew Tour – a key platinum level stop on the AFP calendar.

The competition, which features events in halfpipe and slopestyle and runs December 10-13, will be returning to Breckenridge, Colorado, for the eighth year in a row.

Both teams have been training hard all summer and increased the amount of snow training that they did in the off-season.

“This year, during the off-season we had a number of different training camps, all with different goals in mind,” said Trennon Paynter, head coach of the halfpipe team. “Three of our training camps were on snow, and we had five additional training camps that were geared towards complementary practices and skills.”

Many of the athletes will get an opportunity to try out the new tricks they’ve been working on all summer.

“I managed to learn more new tricks on glaciers this off-season than I’ve learned over the passed few winters combined,” said slopestyle skier Evan McEachran (Oakville, ON). “I feel stronger going into the year. I’m hoping to be able to leave each event happy with how I skied, feeling accomplished by either learning something new, or landing my best run and achieving the result that I set out for!”

A Canadian has not medalled at the Dew Tour since 2013 when both Alex Beaulieu-Marchand and Kim Lamarre captured silver in slopestyle.

“What’s great about this season is that it’s another year where you can work on your skiing,” said Lamarre. “I don’t need to qualify for the Winter Games this season so I can test some things out. My goal is to bring unnatural rotations to my competition runs. Having a solid unnatural spin will be key in order to qualify for 2018. I have to start practicing it in contest this year.”

The following national team athletes are expected to compete: