Alan Palmer (Shaughnessy Golf & Country Club) has claimed the 2015 PDP Champion title
Richmond, B.C. (PGA of BC) – With a new season upon us, the PGA of British Columbia is pleased
to recognize Alan Palmer of Shaughnessy Golf & Country Club as the 2015 PGA of BC Professional Development Program (PDP) presented by Sunice Order of Merit Champion. Palmer capped off 2015 with a grand total of 121 points, the highest point total ever achieved in the three years of the program’s duration. His grand point total is a result of his widespread involvement in various tournaments, education, industry engrossment, and volunteerism.
Also crowned the 2015 Professional Development Award recipient at the 2015 PGA of BC Awards Celebration in October, Palmer is an advocate for personal and career growth and development. He continuously supports the Association as the Education & Events Chair on the PGA of BC’s Board of Directors, while also encouraging his Shaughnessy team members to be actively involved in the community. 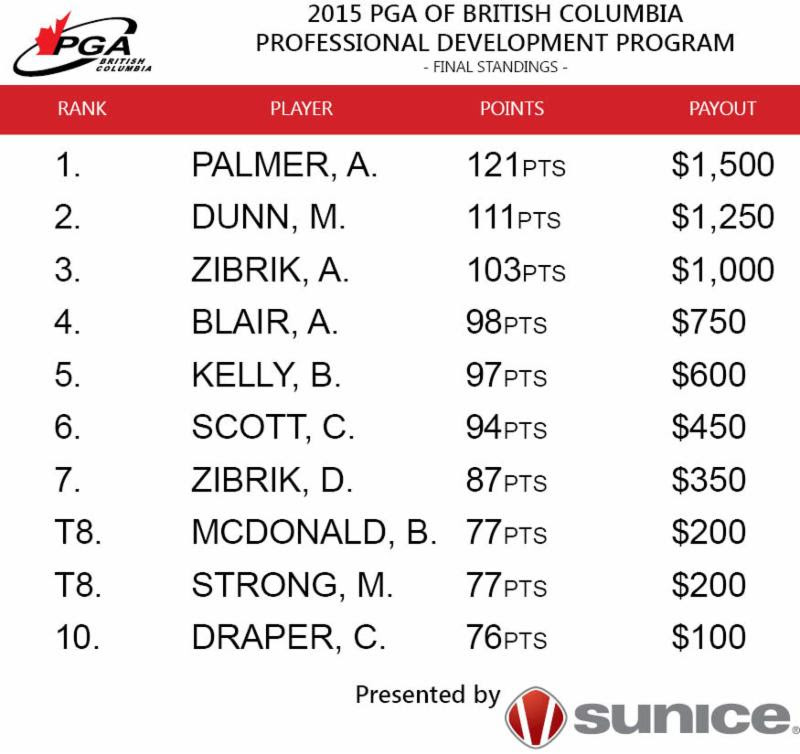 Palmer’s influence on his team is evidenced by this year’s Order of Merit, as bothMatt Dunn and Ashley Zibrik round out the top three with 111 and 103 points, respectively. The $6,400 total prize money, divided amongst the top ten finishers, provides winners with opportunities to continue pursuing their professional education and development.
For final standings of the 2015 PGA of BC Professional Development Program, please click here.
The PGA of British Columbia Professional Development Program (PDP) presented by Sunice is an annual Order of Merit designed to recognize members of the PGA of BC who have shown tremendous contributions to the Association, the Industry, and mostly importantly, themselves. Through participation in education, tournaments, awards, the Buying Show, and various forms of volunteerism, the PDP provides an equal avenue to showcase strengths of the diverse membership.