The Kamloops Kidney Walk is scheduled for Sept. 25, which is only one week from today.Dorothy (aka Wonder Woman) will be taking part for a third straight year after having undergone a kidney transplant on Sept. 23, 2013.She went into this year’s fund-raiser with a goal of $2,000. As of Saturday night, she was No. 7 in B.C., having raised $1,961.If you would like to help push her past $2,000, you may do so right here.———

The Seattle Thunderbirds, having acquired a goaltender on Friday, dealt G Logan Flodell, 19, to the 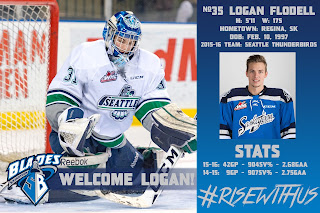 Saskatoon Blades on Saturday, getting back D Anthony Bishop, 18, in return. . . . The Thunderbirds picked up G Rylan Toth, 20, from the Red Deer Rebels on Friday. . . . Flodell, from Regina, was a third-round pick in the 2012 bantam draft. He got into 54 games over three seasons with Seattle, going 26-17-5, 2.84, .899. Last season, he was 22-13-4, 2.68, .904, but he finished up playing behind Landon Bow, a 20-year-old who was acquired from the Swift Current Broncos. . . . The Blades are expected to open the season with Flodell and Brock Hamm, 19, as their goaltenders, although freshmen Dorin Luding and Joel Grzybowski, both 17, remain on their roster. . . . By acquiring Bishop, the Thunderbirds filled a hole created by the sudden retirement of Jared Pelechaty, 17, who was found to have a congenital spine issue that left him susceptible to injury. . . . Bishop, a list player from Kelowna, had two assists in 40 games with the Blades last season. This preseason, he has four assists, three of them on the PP, in five games.
———Got a tip or some information you feel could be useful to me, feel free to email me at greggdrinnan@gmail.com.———

Sad day in the scouting fraternity. Always appreciated our chats and how good he was to me since moving here. Thank you and RIP Bob McGill.— Mike Fraser (@MikeFraser29) September 18, 2016