The Saskatoon Blades will be without F Ryan Graham (leg) and F Cam Hebig (undisclosed) for the immediate future. . . . Hebig, 19, put up 69 points, including a team-leading 26 goals, in 59 games last season. He has played 198 regular-season games with his hometown team over the past three seasons. . . . Graham, 20, had 46 points, 22 of them goals, in 71 games. He is heading into his fifth season with the Blades. Graham is one of three 20-year-olds on the roster, joining F Jesse Shynkaruk and D Bryton Sayers. . . . The Blades open the season against the host Swift Current Broncos on Friday. . . .Vancouver Giants F Alec Baer (shoulder) didn’t play in the exhibition season and is practising in a non-contact sweater. F Tyler Benson of the Giants also has a shoulder injury. He is with the NHL’s Edmonton Oilers but didn’t play Wednesday as the Oilers rookies took on the U of Alberta Golden Bears in an annual matchup. . . . The Giants are at home in the Langley Events Centre to the Everett Silvertips on Friday. . . .F Lane Zablocki of the Regina Pats didn’t play in an exhibition game because of a shoulder injury. But he is expected to be in the lineup Friday as the Pats open the season against the visiting Prince Albert Raiders. Last season, as a freshman, he had 37 points, including 18 goals, in 72 games. He added seven goals in 12 playoff games.—— 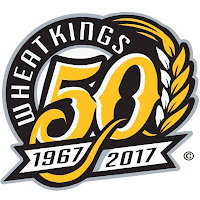 D Kale Clague of the Brandon Wheat Kings was injured while playing for the Los Angeles Kings in a rookie game against the Arizona Coyotes on Wednesday. It doesn’t sound like the injury is serious, but, at the same, he apparently will miss some time. Here is Mike Stothers, who coached the Kings team, in conversation with Kings Insider Jon Rosen: “It’s a lower-body injury . . . I don’t think it’s going to be bad. But it is going to be bad, because he’s a young guy and he’s going to miss a little bit of time, I would imagine. You never want to see a young kid get hurt. You don’t want to see anybody get hurt. . . . But I think he’ll be OK, shortly.” . . . Clague, 18, was a second-round pick by the Kings in the 2016 NHL draft. He had 43 points, including 37 assists, in 71 games with Brandon last season. In 21 playoff games, he added 14 points, six of them goals.——

The Regina Pats have acquired D Tyler Jubenvill, who will turn 17 on Nov. 30, from the Spokane Chiefs for a conditional fourth-round pick in the 2018 bantam draft. Jubenvill, from Gilbert Plains, Man., was a ninth-round selection by the Chiefs in the 2014 draft, but has committed to the NCAA’s Bemidji State Beavers. Last season, with the MJHL’s Winkler Flyers, the 5-foot-10, 180-pounder had four goals and 27 assists in 57 games. He has returned to the Flyers this season. . . . Earlier, the Pats rolled the dice on a couple of other players believed going the NCAA route. They acquired the rights to F Nick Henry from the Everett Silvertips earlier this year and have since signed him. They selected F Bryan Lockner in the third round of the 2015 draft and also were able to sign him. . . . Also on Wednesday, the Pats dropped F Jake Elmer, who will turn 18 on Dec. 31, from their roster. He is expected to report to the AJHL’s Grande Prairie Storm. The Calgary native was pointless in 17 games with the Pats last season. He also got into 20 games with the Storm, recording a goal and three assists.——Rob Vanstone, in the Regina Leader-Post: “Fighting in hockey is pointless, Part 2,378,119: Jayce Hawryluk suffered a broken hand in a fight during a rookie game with the NHL’s Florida Panthers. If not for hockey’s backwards culture, the 19-year-old Hawryluk — who had 106 points, including 47 goals, in 58 games with the WHL’s Brandon Wheat Kings last season — would have more opportunities to use his hands to impress the Panthers’ brass with his abundant offensive skills. . . .Who says that nobody gets hurt in a hockey fight?”——

The CHL’s first ratings of the 2016-17 season — as voted on by a panel of anonymous NHL scouts — were released on Wednesday afternoon and the OHL’s London Knights, the defending Memorial Cup champions, are in the No. 1 slot. . . . There are four WHL teams in the top 10: 3. Brandon Wheat Kings; 4. Seattle Thunderbirds; 8. Victoria Royals; 10. Regina Pats. . . . The Kelowna Rockets got an honourable mention. . . . Keep in mind, however, that there isn’t much on which to base these rankings this early in the season. . . . Uhh, the visiting Knights lost 4-1 to the Sarnia Sting on Wednesday night. The Sting received an honourable mention in the rankings.——Commissioner Gilles Courteau says the QMJHL has changed the rules regarding its draft lottery — there now will be five teams in the lottery, rather than two. With 16 of the league’s 18 teams qualifying for the playoffs, the lottery now will include the two non-playoff teams as well as the three lowest qualifiers. ——As you no doubt will be aware, the legendary Vin Scully will walk away from his one-of-a-kind broadcast career after calling the play of the game between his Los Angeles Dodgers and the San Francisco Giants on Oct. 2. . . . What you may not know is that there is a line between Scully and the WHL. Mike Benton, who is preparing for his second season as the voice of the Everett Silvertips, grew up worshiping at the Scully shrine and, at one point, had the opportunity to job shadow his hero. . . . Benton writes about all of that right here.——If you are a regular in these parts, you know how I feel about organ donations and you also know why I feel the way I do. When I was hired as sports editor of Kamloops Daily News, Susan Duncan was the editor. Almost three months ago, she became a kidney donor. On Wednesday, she and Lloyd Garner, the recipient of that kidney, appeared on The Jim Harrison Show on Radio NL in Kamloops. . . . The story of how she came to give him a kidney is rather amazing. . . . Take 12 minutes and give it a listen right here.———Got a tip or some information you feel could be useful to me, feel free to email me at greggdrinnan@gmail.com.———

Kootenay at Calgary, 7 p.m.Kelowna at Kamloops, 7 p.m.Medicine Hat at Lethbridge, 7 p.m.Brandon at Moose Jaw, 7 p.m.Edmonton at Red Deer, 7 p.m.Prince Albert at Regina, 7 p.m.Saskatoon at Swift Current, 7 p.m.Everett at Vancouver, 7:30 p.m.
Prince George at Victoria, 7:05 p.m.
There has never been a subscription fee for this blog, but if you enjoy stopping by here, why not consider donating to the cause? Just click HERE. . . and thank you very much.