Canada will be looking to reclaim the gold medal, after falling to Russia 3-0 in the 2015 championship game in Granada, Spain. The loss marked the first time the Canadians hadn’t won the event since women’s hockey’s debut at the FISU Games in Harbin, China in 2009.

The 22-player roster features 20 members who skated for Team CIS at Hockey Canada’s Women’s Development Camp in August. Eight players come from the Canada West conference, along with seven from OUA, five from the RSEQ and two from AUS. The defending national champion Montreal Carabins lead the way with four selections.

Canada will compete in Group A alongside China, Great Britain and host Kazakhstan. Group B consists of the defending champion Russia, Japan and the United States.

Returning from the 2015 Universiade squad, former Western defenceman Katelyn Gosling headlines the roster. Gosling, a CIS champion with the Mustangs two seasons ago, took part in Hockey Canada’s Fall Festival with the women’s national team after being drafted over the summer by the Canadian Women’s Hockey League’s (CWHL) Calgary Inferno.

Adding to the leadership core is Guelph goaltender Valerie Lamenta, the reigning CIS player of the year. Lamenta will share the crease with Waterloo’s Stephanie Sluys

“We are very excited about the team that has been selected to compete at this event,” said Flanagan. “We have a character group of athletes that are skilled, fast and competitive and have our sights set on reclaiming the women’s hockey gold in Kazakhstan.” 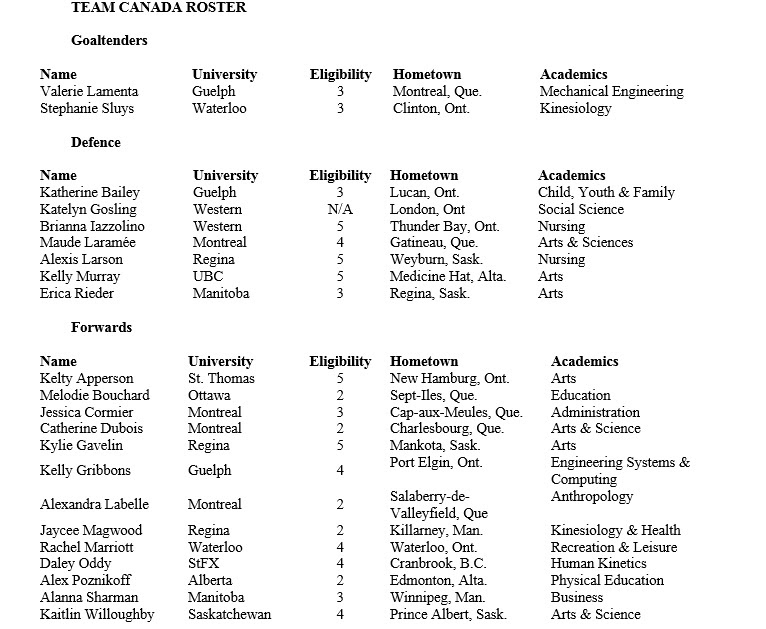