The NHL’s Buffalo Sabres returned D Brendan Guhle, 19, to the Prince Albert Raiders on Tuesday. Guhle was a second-round selection by the Sabres in the NHL’s 2015 draft. He has signed with the Sabres. Last season, he had 28 points, including 18 assists, in 63 games. He finished the season with the AHL’s Rochester Americans, recording a goal and three assists in six games. . . . The Raiders visit Brandon on Friday and then play host to the Wheat Kings on Saturday night.—— 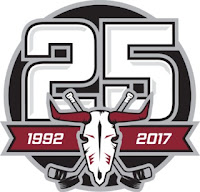 The Red Deer Rebels will be without G Tyson Verhelst, 19, and F Reese Johnson, 18, for a while. . . . Greg Meachem of reddeerrebels.com reports that Verhelst has an undisclosed injury. Verhelst, who suffered at least two concussions last season, hasn’t played for the Rebels since being acquired from the Spokane Chiefs on Sept. 29. . . . Johnson, who has been plagued by injuries, had shoulder surgery last season and that allowed him to play only 36 games. He injured his other shoulder during an exhibition game and is scheduled for more surgery this month. “He’s had a tough go,” Brent Sutter, the Rebels’ GM and head coach, told Meachem. “He has to have his other shoulder done now and hopefully once he gets it done he’ll be a new man and won’t have to worry about shoulder problems anymore. He’s out until the end of March, for sure.” . . . Meachem’s story is right here.——The Lethbridge Hurricanes have released D Riley Shamray, 18, from their roster. He is expected to play for the MJHL’s Waywayseecappo Wolverines. . . . Shamray is from Oak River, Man. The Hurricanes acquired him from the Calgary Hitmen over the summer, giving up a seventh-round 2017 bantam draft pick in the exchange. . . . He was pointless in five regular-season games with Lethbridge. . . . The Hurricanes now have 23 players on their roster, including two goaltender and seven defencemen.——The Kelowna Rockets have released F Tate Coughlin, 19, who was into his third season with the WHL team. He had four goals and nine assists in 112 regular-season games. . . . Coughlin, from Victoria, had two goals and two assists in 49 games last season.——Got a tip or some information you feel could be useful to me, feel free to email me at greggdrinnan@gmail.com.———

At Brandon, the Portland Winterhawks scored five PP goals and beat the Wheat Kings, 7-6. . . . Goals by D Jordan Wharrie, his first with the Wheat Kings, and F Ty Lewis gave the home side a 2-0 lead before the first period was 13 minutes old. . . . The Winterhawks went back in front with three goals in the first half of the second period, from F Lane Gilliss, F Joachim Blichfeld and D Keoni Texeira, the latter two coming via the PP. . . . Brandon F Tanner Kaspick tied it at 11:44, only to have F Alex Overhardt put Portland out front on another PP, at 14:52. . . . Kaspick, who has five goals, tied it again at 16:14. . . . F Keegan Iverson restored Portland’s lead, on a PP, just 29 seconds into the third period. . . . F Reid Duke, in his first game since returning from the AHL’s Hartford Wolf Pack, scored shorthanded at 1:15 and it was tied again. . . . Portland F Cody Glass got the eventual game winner on, yes, another PP, at 2:26. . . . The Winterhawks got insurance when F Evan Weinger scored into an empty net, at 18:52. . . . Brandon F Nolan Patrick completed the scoring at 19:56. . . . Blichfeld added two assists to his goal, while F Skyler McKenzie had three assists and D Caleb Jones had two. Weinger and Texeira each added assists to their goals. . . . Duke added two assists to his goal and Patrick had one. . . . Portland G Cole Kehler made 40 saves, 11 more than Brandon’s Jordan Papirny. . . . The Winterhawks (6-3-0) finished 5-9 on the PP; the Wheat Kings were 2-9. . . . Portland has scored 15 PP goals in nine games. . . . The Winterhawks are 3-2-0 on their East Division trip. . . . Brandon (2-3-1) has lost two in a row. . . . With Duke back, the Wheat Kings have four 20-year-olds on their roster. Able to dress only three per game, they scratched F Duncan Campbell last night. . . . The Winterhawks placed F Rodrigo Abols on waivers as they got down to the maximum of two import players. Abols, 20, is available to each of the other 21 teams. If he clears WHL waivers, he will be made available to OHL and QMJHL teams. . . . Announced attendance: 3,420.——


Saw two people who appear to be on a first or second date awkwardly greet each other outside @ShoWareCenter. 2-for-Tuesday spreads love.— Seattle Sportsnet (@alexSSN) October 12, 2016

At Kent, Wash., F Kailer Yamamoto broke a 1-1 tie 40 seconds into the third period and the Spokane Chiefs skated to a 3-1 victory over the Seattle Thunderbirds. . . . F Pavel Kousal’s second goal gave the Chiefs a 1-0 lead at 6:00 of the second period. . . . Seattle F Scott Eansor pulled his guys even at 16:33. . . . Spokane F Curtis Miske got the empty-netter, at 19:46 of the third. . . . The Chiefs got a big game from G Dawson Weatherill, who made 44 saves. . . . Seattle got 19 saves from G Rylan Toth. . . . The Chiefs (2-3-0) had lost their previous two games. They play in Kamloops on Wednesday night. . . . The Thunderbirds are 2-3-0. . . . The Chiefs were 0-2 on the PP; the Thunderbirds were 0-4. . . . F Ryan Gropp was pointless in his return to Seattle’s lineup from the AHL’s Hartford Wolf Pack. . . . According to TBird Tidbits (@TBirdTidbits), Seattle went into last night’s game have won six in a row at home over the Chiefs, outscoring the visitors 21-9 in the process. Spokane was held to one goal in five of those six games. . . . The game featured the Hamaliuk brothers — Dalton, a defenceman with the Chiefs, and Dillon, a forward with the Thunderbirds. . . . The Thunderbirds learned earlier in the day that F Mathew Barzal, 19, had made the roster of the NHL’s New York Islanders. . . . Announced attendance: 4,019.——

Spokane at Kamloops, 7 p.m.Victoria at Lethbridge, 7 p.m.Everett at Prince George, 7 p.m.
Portland at Regina, 7 p.m.
There has never been a subscription fee for this blog, but if you enjoy stopping by here, why not consider donating to the cause? Just click HERE. . . and thank you very much.