It doesn’t indicate it in F Brayden Gelsinger’s bio on the Lake Superior State Lakers’ website, but the Regina native did play 14 games with the Kamloops Blazers.Gelsinger was pointless in two playoff games in the spring of 2012 and pointless in 12 regular-season

games in 2012-13. He later played with the BCHL’s Cowichan Valley Capitals, West Kelowna Warriors and Victoria Grizzlies, putting up 51 goals and 104 assists in 169 games.Now he’s a freshman forward, wearing No. 11, for the Lakers. He’s contributing, too, with three goals and four assists in four games.That’s right. Gelsinger, now 21, signed a WHL contract and played in the WHL, and now he’s playing for an NCAA Division I hockey team.You’re thinking . . . hmmmm, I thought signing a WHL contract meant a player lost his NCAA eligibility. I thought playing a WHL game meant a player no longer was eligible to play in the NCAA.Well . . .Gelsinger was playing with the BCHL’s Victoria Grizzlies on Jan. 7, when he accepted a scholarship to Lake Superior State, which is based in Sault Ste. Marie, Mich.It turns out that Gelsinger and his family worked with the NCAA and its Eligibility Center to get him on the Lakers’ roster.“The NCAA Eligibility Center is responsible for determining a student-athlete's initial eligibility status based on their pre-enrollment athletic history,” Jen Constantino, LSSU’s NCAA compliance officer and deputy Title IX co-ordinator,” told Taking Note via email. “Brayden and his family worked with the Eligibility Center prior to his enrolment at Lake Superior State University to answer the NCAA's questions and provide them with the information they needed to make their decision.“The NCAA made the determination that Brayden Gelsinger would be immediately eligible for competition. Our athletic department has followed the direction given to us by the NCAA.”So it would seem that signing a WHL contract and even playing a handful of games need not be the death knell for a young man should the opportunity arise to go to a U.S. school.——The story of the WHL, the governing B.C. Liberals and how the cabinet moved to exempt the league from minimum-wage legislation may not be finished. Ian Mulgrew of the Vancouver Sun reports that, according to the B.C. Office of the Registrar of Lobbyistys, the league “did not register as a lobbyist before leaning on B.C.’s cabinet to exempt major junior players from the minimum wage law.” . . . Ron Robison, the WHL commissioner, told Mulgrew that such a move wasn’t necessary. . . . According to Mulgrew, the regulator now is taking a look at the situation. . . . Mulgrew’s story is right here.—— 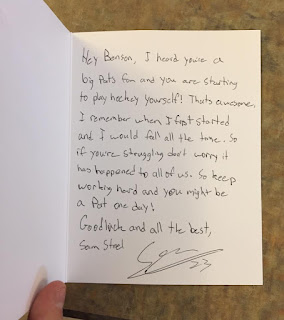 You can bet that F Sam Steel of the Regina Pats has a fan for life in the person of Benson Broda.Benson’s mother, Krista, posted his on Facebook:

“Benson started skating lessons a few weeks ago and was so frustrated that he couldn't stop falling, he just wanted to just be able to go out and skate like a hockey player. He told me when he got home that he never sees Sam Steel (his absolute favourite Regina Pat ever) fall. He basically thought you either could skate or you couldn't, and he couldn't, so he wanted to give up. The lessons were expensive, so I did what any crazy mom would do and emailed the Pats asking if there was any way Sam Steel could somehow tell him he used to fall too. I got a reply from the Pats office saying that he was at Anaheim Ducks training camp, but asked for my address and said they would try and get something out for him when he got back. . . . I assumed they forgot (because it was a totally weird request and he's pretty busy scoring goals) but we opened the mail to this on Friday.”——D Duncan Campbell has cleared WHL waivers and now is a free agent. Campbell was placed on waivers as the Wheat Kings got down to the maximum three 20-year-olds. They chose to go with F Tyler Coulter, F Reid Duke and G Jordan Papirny. . . . Campbell, a Brandon native, now is free to move to the OHL or QMJHL, should the opportunity arise. Or, should he choose, he is free to play junior A. . . . The Penticton Vees hold his BCHL rights and it wouldn’t be surprising to see him end up with them. . . . Campbell was pointless in six games with Brandon this season. In his previous two seasons, he totalled 22 goals and 21 assists in 140 regular-season games.———

The Portland Winterhawks have dropped F Brett Clayton, who is to turn 18 on Nov. 22, from their roster. He is expected to join the AJHL’s Brooks Bandits. From Abbotsford, B.C., Clayton had a goal and two assists in 57 games with Portland last season. This season, he was pointless in three games. The Saskatoon Blades selected him in the 10th round of the 2013 WHL bantam draft. . . . The Russian team that will meet Team WHL in the CIBC Canada-Russia series has revealed its tentative roster — three goaltenders, 13 defencemen and 20 forwards. . . . Included are a few WHLers — D Artyom Minulin (Swift Current Broncos), D Dmitriy Zaitsev (Moose Jaw Warriors), D Sergey Zborovskiy (Regina Pats), F Nikita Popugaev (Moose Jaw). The roster also includes F Klim Kostin, who was selected by the Kootenay Ice with the first overall pick in the CHL’s 2016 import draft. Kostin chose not to join the Ice and has played this season with Dynamo Moscow of the KHL and the VHL’s Dynamo Balashikha. . . . Dale McFee has stepped aside after 10 years as president of the Prince Albert Raiders. McFee, who is a former Raiders player (1982-86), cited time constraints in making his decision. Long-time board member Gord Broda has been elected president of the community-owned franchise, with McGee as vice-president.——Got a tip or some information you feel could be useful to me, feel free to email me at greggdrinnan@gmail.com.———

At Kelowna, F Kole Lind had a goal and three assists to lead the Rockets to a 6-4 victory over the Victoria

At Red Deer, the Rebels scored the game’s first three goals, all in the second period, en route to a 5-2

Tri-City at Everett, 7:05 p.m.
There has never been a subscription fee for this blog, but if you enjoy stopping by here, why not consider donating to the cause? Just click HERE. . . and thank you very much.