F Ryan Graham, who played at least five games with the Saskatoon Blades in each of the past six

seasons, got caught up in the WHL’s 20-year-old game on Sunday and now is on the roster of the Swift Current Broncos. . . . In return for Graham, the Blades acquired a second-round selection in the 2017 WHL bantam draft and a conditional fourth-round pick in 2018. . . . Graham, from Calgary, has a goal and four assists in 11 games with the Blades this season. He missed the start of the season with an undisclosed injury. . . . A fifth-round pick in the 2011 bantam draft, Graham has 116 points, including 59 goals, in 248 regular-season games, all with the Blades. He scored 20 goals in 2014-15 and added 22 last season. . . . The Broncos now have two 20-year-olds on their roster, F Calvin Spencer being the other, so still have room to add another one. . . . With F Jesse Shynkaruk, 20, due back this week after being out with an undisclosed injury, the Blades had to trim one 20-year-old to get down to the maximum of three. Their other 20s are F Kolten Olynek and D Bryton Sayers. . . . Interestingly, the Blades are to visit the Broncos on Tuesday night.——The City of Nanaimo, according to CHEK News, “has completed an initial study looking into the building of an event centre with up to 8,300 seats, depending on the event.” . . . Apparently, a new facility would seat up to 5,700 for hockey. . . . But a new facility — it would cost somewhere between $62 million and $83 million, and financing isn’t in place — is a long way from reality. . . . In fact, going by the report by CHEK’s Kendall Hanson, the puck may well have been passed back to the WHL. “We need to have a team that has a stake in the building if we choose to go to a WHL team,” Mayor Bill McKay told Hanson. “We need to have investors that have a stake in the building, otherwise they’re completely immobile and we’re the ones taking all the risk.” . . . In other words, the Kootenay Ice will be in Cranbrook for a while yet. . . . Hanson's story is right here.——While the WHL isn’t likely to land in Nanaimo any time soon, there could be a new hockey team on the way to the Vancouver Island city. . . . VIU Hockey Inc., a non-profit group, is hoping to land a franchise in the B.C. Intercollegiate Hockey League that would begin play out of the Ice Centre in September. . . . Dominic Abassi of the Nanaimo News reports that a team in Nanaimo would play “under the banner of Vancouver Island University athletics.” A hockey team wouldn’t be a full-fledged member of the athletic department, but would play as a club team. . . . The BCIHL’s next meeting is scheduled for Dec. 7 and more light could be shed on the situation at that time. . . . The BCIHL features teams at Selkirk College in Castlegar, B.C., Trinity Western U in Langley, B.C., Eastern Washington University in Cheney, Simon Fraser U in Burnaby, B.C., and the U of Victoria. . . . There had been a club team associated with Thompson Rivers U in Kamloops, but it folded when the athletic department dropped its support when it wasn’t able to come up with a suitable business plan. Club teams are responsible for their own budgets, something the Nanaimo group figures will run about $80,000 per season. . . . Abassi’s story on the Nanaimo project is right here.—— 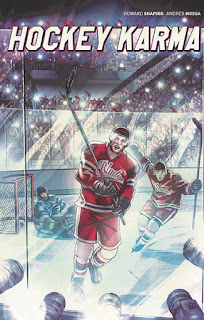 It has been a long time — a long, long time — since I was an avid reader of comic books. Since those days, I really haven’t had occasion to read any, especially since our son, who also loved them, vacated the premises what seems a long time ago.But just the other day I kind of reconnected with the genre when the graphic novel Hockey Karma landed on my desk.Granted, Hockey Karma isn’t a comic book, although I would suggest it is a comic book for adults.Never mind, though, because the important thing is that I quite enjoyed the experience and you can bet that I will be revisiting the genre.Hockey Karma was written by Howard Shapiro, illustrated by Andres Mossa and lettered by Ryan Ferrier. It is the final installment in what a news release refers to as a “graphic triptych.” Hockey Karma completes Shapiro’s Forever Friends Trilogy, along with The Stereotypical Freaks and The Hockey Friends.It details the final season in Jeremiah (Jake) Jacobson’s professional career. There’s a new kid in town and a transition is underway — Barclay Pedersen is replacing Jacobson as the face of the Can Am Hockey League’s Bay City Blades, who happen to have a female head coach.It isn’t easy for Jacobson to hand over the torch as he battles with the realization that the end of his 14-year CAHL career is nigh. There also is a bad back with which to deal, something that really — really! — complicates things.There is an agent, Tom Leonard, who is the centre piece in a couple of subplots that only add to the story.Interestingly, each of the 12 chapters is preceded by a two-, three- or four-tune playlist featuring the work of various artists including The Rolling Stones, Bob Dylan, The Cure, Tom Petty and the Heartbreakers, Joe Walsh, and Tom Cochrane and Red Rider, just to name a few.All in all, devouring Hockey Karma was a terrific experience and a great introduction to its genre. Yes, I will be back.———

At Portland, F Tyler Wong scored 18 seconds into OT to give the Lethbridge Hurricanes a wild 6-5 victory

Red Deer at Calgary, 7 p.m.Medicine Hat at Moose Jaw, 7 p.m.Regina at Prince George, 7 p.m.Edmonton vs. Seattle, at Kent, Wash., 7:05 p.m.Saskatoon at Swift Current, 7 p.m.Kelowna at Victoria, 7:05 p.m.
There has never been a subscription fee for this blog, but if you enjoy stopping by here, why not consider donating to the cause? Just click HERE. . . and thank you very much.