D Jonathan Harty (Everett, 2004-08) has signed a contract for the rest of this season with Heilbronner Falken (Germany, DEL2). This season, with Olimpija Ljubljana (Slovenia, Erste Bank Liga), he had five goals and eight assists in 23 games.-———

In news that hardly ranks as surprising, Hockey Canada announced Monday night that F Nolan Patrick of the Brandon Wheat Kings won’t be taking part in the national junior team’s selection camp that opens Sunday in Blainville, Que.Patrick, who still is the consensus No. 1 pick for the NHL’s 2017 draft, hasn’t played since Oct. 11 and hasn’t been medically cleared to attend the camp. He underwent sports hernia surgery in July and is believed to have incurred some difficulties relating to that surgery.According to Hockey Canada, there won’t be a roster replacement for Patrick, who was the WHL’s playoff MVP as he lead the Wheat Kings to the 2016 Ed Chynoweth Cup. Without Patrick, Canada’s selection camp roster will include 18 forwards.——
The Regina Pats could have as many as four players involved in the 2017 World Junior Championship when it opens in Toronto and Montreal on Boxing Day.

F Filip Ahl was named Monday to Team Sweden’s preliminary roster. Ahl and John Dahlstrom of the Medicine Hat Tigers join 13 other forwards selected to the roster.Last week, the Pats had forwards Sam Steel and Austin Wagner named to the Canadian national junior team’s selection camp roster, while D Sergey Zborovskiy is on Team Russia’s preliminary roster.The tournament runs from Dec. 26 through Jan. 5. The The Pats will return from their Christmas break to play the visiting Brandon on Wheat Kings on Dec. 27. Counting that game, Regina is to play seven games from Dec. 27 through Jan. 7.Five other players showed up on preliminary rosters on Monday, three of them with Team Denmark.Lasse Petersen of the Red Deer Rebels is one of six goaltenders on Denmark’s roster. He is joined by forwards Joachim Blichfeld of the Portland Winterhawks and Alexander True of the Seattle Thunderbirds. Denmark’s roster includes 22 forwards.Juuso Välimäki of the Tri-City Americans is one of 10 defencemen on Team Finland’s preliminary roster.Caleb Jones of the Portland Winterhawks is one of eight defencemen on Team USA’s preliminary roster. He is the only WHL player on that roster.——D Juuso Välimäki has left the Tri-City Americans for a couple of days as he has been invited to take part in Independence Day celebrations in Helsinki today (Tuesday). Välimäki was the captain of the Finnish team that won the IIHF’s U-18 world championship in Grand Forks, N.D., in April. . . . Independence Day in Finland celebrates accomplishments of its citizens around the world. About 1,800 guests will join President Sauli Niinistö and his wife, Jenni Haukio, in Helsinki.——

The Everett Silvertips have acquired G Dorrin Luding, 17, from the Saskatoon Blades for a sixth-round selection in the 2019 bantam draft. From Prince George, the 6-foot-1, 205-pound Luding is 4-4-0, 2.93 with the Valley West Hawks of the B.C. Major Midget Hockey League. Saskatoon picked him in the third round of the 2014 bantam draft. . . . Luding has been added to Everett's roster. . . . Everett GM Garry Davidson explained the trade in a news release: “As we’re anticipating Carter Hart’s potential absence with commitments to Hockey Canada for the upcoming World Junior Championship, the move to acquire Dorrin helps address an immediate need for goaltending depth with our current roster, imperative in the oncoming weeks.” . . . Hart could miss as many as 11 games if he makes Team Canada’s roster. With him gone, it would appear that the Silvertips will go with sophomore Mario Petit and Luding. This season, in five appearances, Petit is 4-0-1, 2.45, .916.——D Brendan Guhle of the Prince George Cougars played his second game in three days with the NHL’s

Buffalo Sabres on Monday. The Sabres dropped a 3-2 OT decision to the Capitals in Washington.Guhle’s ice time was 16 minutes 48 seconds. He had three hits and four blocked shots, with no shots on goal. The Sabres dressed six defencemen; Guhle had more ice time than two of them.Guhle only saw five seconds of PP time but head coach Dan Bylsma admits that he may give him a shot on the team’s second PP unit.Guhle went to Buffalo under emergency recall regulations. The Sabres have four defencemen injured — Zach Bogosian (knee), Josh Gorges (broken foot), Dmitri Kulikov (undisclosed) and Taylor Fedun (undisclosed) — so Prince George shouldn’t hold its breath waiting for Guhle’s return.The Sabres had D Erik Bergdoerfer up from the AHL’s Rochester Americans and he made his NHL debut, the 11th defenceman dressed by Buffalo this season.The Sabres are back on the ice tonight (Tuesday) as they play host to the Edmonton Oilers.—— 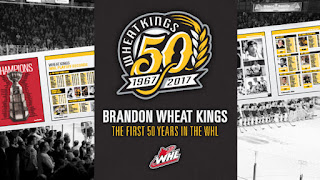 The Brandon Wheat Kings are celebrating their 50th anniversary season in the WHL. In conjunction with that, they are publishing a book: Brandon Wheat Kings — The First 50 Years in the WHL. . . . According to a news release, the 124-page soft cover book provides “a look back at the teams and players of Manitoba’s major junior franchise.” . . . From the news release: “The book, which highlights the club’s history, team and player photos and detailed stats, will go on sale later this week at the BWK Team Store located at the Keystone Centre as well as online at wheatkings.com. . . . Proceeds from the sale of the book will go to the Wheat Kings’ Education Fund.” . . . The book will set you back $29.99, which includes all taxes.——The Denver Post reported Monday morning that a coroner has revealed that former Kootenay Ice F Marek Svatos had codeine, morphine and the anti-anxiety medication Xanax in his system when he died on Nov. 5 in Lone Tree, Colo., near Denver. . . . Svatos, a Slovakian, was 34. . . . Tom McGhee of the Post wrote that Svatos “had a history of heroin use and had gone through drug rehabilitation, according to the coroner’s report. He also had suspected depression, prior suicidal ideation, and ‘recent life stressors.’ ” . . . The report also said that there was drug paraphernalia at the scene of Svatos’s death. . . . McGhee’s story is right here.——Peter King of Sport Illustrated spends more than a few column inches on quarterback Henry Burris and the Grey Cup-champion Ottawa Redblacks in his Monday Morning Quarterback piece. . . . It’s right here.——If you’ve got a comment, some information you would like to pass along, or if you just want to say hello, feel free to contact me at greggdrinnan@gmail.com.If you would like to donate to the cause, please visit the bottom of this post and go right ahead.———

Jeff Richards has resigned as general manager and head coach of the AJHL’s Calgary Mustangs. According to a news release from the Mustangs, Richards resigned for “personal reasons . . . Later Monday, the Mustangs announced they had signed Tyler Drader as head coach. He had been the head coach of the midget AAA Calgary Northstars. . . . Then the Mustangs went out and beat the visiting Camrose Kodiaks, 2-1, to run their winning streak to two games. They beat the host Grande Prairie Storm, 5-3, on Saturday night. . . . The Mustangs (5-24-1) have the AJHL’s poorest record. . . . Richards stepped in as head coach just over a year ago after the team fired Chad Allen.———

My son is U-16 AAA. Just played 4 games in under 1.5 days. So many injuries. Game is too fast now, kids hit hard. @usahockey @HockeyCanada— Corey Hirsch (@CoreyHirsch) December 5, 2016

Teams come in, play more games in less time to keep family costs down, I get it. However I just spent 1500$ on medical bills. He's fine.— Corey Hirsch (@CoreyHirsch) December 5, 2016

Huge supporter of great programs and wonderful job @usahockey @HockeyCanada do. Amazing orgs. Love them. However, this needs to be regulated— Corey Hirsch (@CoreyHirsch) December 5, 2016

At Edmonton, F Tyler Wong had a goal and two assists to lead the Lethbridge Hurricanes to a 6-4 victory