While the WHL’s executives, owners and governors were in Las Vegas for their semi-annual meetings, a judge in Calgary was hearing arguments to do with that potential class-action suit that more than 370 players and former players have filed against the CHL, OHL and WHL.

Things didn’t go well for the CHL, OHL and WHL, as Justice Robert Hall ruled that the pro-junior agreement between the CHL and NHL won’t be sealed, and that financial statements and tax returns of the 42 WHL and OHL teams will be unsealed.The former and present-day players are wanting the go-ahead to proceed with a class-action suit that would request that OHL and WHL teams, for starters, pay at least the legislated minimum wage in each jurisdiction. The certification hearing is scheduled to continue in Calgary on Wednesday.Rick Westhead, a senior reporter with TSN, was in the courtroom on Tuesday. He live-tweeted proceedings, and what follows is each of his tweets in chronological order . . . —CHL lawyer begins hearing in Calgary today arguing against release of 7K pages of documents showing financial health of 42 WHL, OHL teams.—CHL president David Branch, along with several former WHL players suing the league for min. wage, watching proceedings from the gallery.—Lawyer for current & former players tells judge KPMG's report on WHL, OHL team finances "portrays an image that's not fair or accurate.”—Lawyer Ted Charney also wants disclosure of NHL deal w/ CHL, which includes "substantial" annual grant & $$ for teams whose players drafted—Lawyer for players says KPMG report of WHL, OHL team finances didn't rely on audited numbers, or any details of items like "other expenses.”—Judge Robert Hall to CHL lawyer: "[Plaintiffs] are saying one of your owners could be paying his wife $500K for her services.”—Now, Fred Kozak, lawyer for CTV and CBC, arguing full disclosure of WHL, OHL team finances, is in public interest.—CHL lawyer Norm Machida back at it. "Why do we need to know [the financials of] 42 teams and how they did exactly?”——Judge wraps up morning hearing over disclosure of CHL financial statements. "The battle lines are drawn.”—

—Judge in CHL case says he will not seal the agreement between the NHL and CHL, which outlines the compensation paid by NHL to CHL teams.—Judge notes NHL did not appear in court to argue NHL-CHL contract is confidential. "I see nothing in the agreement that makes it a trade secret.”—Breaking: Judge in CHL minimum wage lawsuit rules the financial statements and tax returns of 42 WHL, OHL teams will be unsealed.—The CHL asked judge to anonymize the teams' financial documents. Justice Hall said no. No guesswork linking financials to teams A, B, etc.—The only items from the 7,000 pages of documents that will be redacted are personal social insurance numbers, home addresses, judge ruled.—Lawyers now turn to arguments on whether the WHL minimum wage lawsuit should be certified as a class action.—Lawyer for players in CHL case tells judge the WHL’s total revenue in 2016 was $87M. (KPMG’s recent report claimed it was much lower.)————————Head coach David Anning, who has missed Brandon’s past two games, wasn’t at practice again on Tuesday as the Wheat Kings iced only 17 skaters and one goaltender. 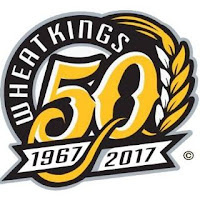 That came with news that, according to a news release, “a member of the Wheat Kings organization has been diagnosed with mumps.”Later in the day, Perry Bergson of the Brandon Wheat Kings reported: “While the Western Hockey League team is keeping a tight lid on who’s affected, the Sun has learned that there have been two positive tests and that at least four other members of the organization were affected in some way.”The WHL roster report that was released on Tuesday shows three Brandon forwards — Caiden Daley, Reid Duke and Cole Reinhardt as being out day-to-day with “illness.” It also shows F Rylan Bettens as having returned from “illness.”The Wheat Kings spent a lot of time on their bus as January ended, as they played three games in four days in Medicine Hat, Calgary and Lethbridge. They returned home to face the Edmonton Oil Kings on Feb. 3, then climbed on the bus and drove to Swift Current where the met the Broncos the next night.They next are scheduled to play on Wednesday when the Moose Jaw Warriors visit. The teams are to complete a suspended game from Sept. 24 and then to play a regularly scheduled contest. The Everett Silvertips are to play in Brandon on Friday, with the Wheat Kings in Saskatoon on Saturday.With Anning out of action, assistant coach Don MacGillivray has been running the Wheat Kings’ bench.Thanks to Bruce Luebke, the former Wheat Kings radio voice, for the reminder about the last time mumps was a story in the hockey world. That was in December 2014 when it caught up with a few players, including Sidney Crosby of the Pittsburgh Penguins. At that time, Eric Duhatschek of The Globe and Mail did an all-encompassing piece on mumps and all that goes with it. That story is right here and is most timely with what is happening in Brandon.——
If you enjoy stopping off here and would care to make a donation to the cause, please feel free to do so by clicking on the DONATE button and going from there.If you have some information you would like to share or just a general comment, feel free to email me at greggdrinnan@gmail.com.———The Sandman Centre, the home of the Kamloops Blazers, apparently needs some help, like more than $1.5-million worth, with about $760,000 of that needed to pay for upgrades demanded by the WHL.

Byron McCorkell, Kamloops’ parks, recreation and cultural services director, told council on Tuesday that the WHL wants LED lighting by 2019 in order to televise games in high definition. The cost of that would run about $300,000.Andrea Klassen of Kamloops This Week also reports: “The city also needs to retrofit Sandman Centre’s boards and glass to a new WHL standard with improved shock absorption, designed to cut down on injuries, at a cost of about $550,000. To accommodate the boards, the city must retrofit the bleachers nearest to the ice for about $460,000.”Klassen’s complete story is right here.The Sandman Centre opened in time for the 1992-93 WHL season.
There has never been a subscription fee for this blog, but if you enjoy stopping by here, why not consider donating to the cause? Just click HERE. . . and thank you very much.