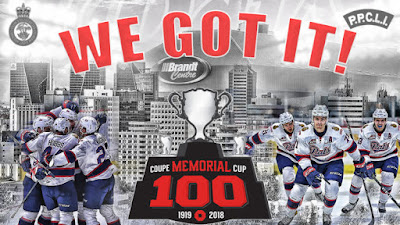 The 100th anniversary of the Memorial Cup will be celebrated in Regina with the Pats as the host team for the annual four-team tournament. The announcement was made Saturday afternoon.The Pats also will celebrate their 100th anniversary in 2017-18, so this obviously seems to be a match made in hockey heaven.As Rob Vanstone of the Regina Leader-Post writes right here:“The circumstances were aligned in the Pats’ favour, especially when the team’s long-standing military connection was factored into the equation. The Memorial Cup is dedicated to all Canadian military personnel who have lost their lives during combat.“Consider, too, that Regina is expected to ice another top-flight team during the 2017-18 season.“Simply put, there was a check mark beside every box when the Pats’ proposal was submitted. There wasn’t any choice but to select Regina.”The other finalists both were from the OHL — the Hamilton Bulldogs and Oshawa Generals.If you are wanting to book your vacation, the 2018 Memorial Cup is to be held May 17-27.The news release issued by the Pats is right here.——The injury bug continues to nibble away at the Victoria Royals.

Already without F Tyler Soy (week-to-week) and F Ryan Peckford (six to seven weeks) with undisclosed injuries, the Royals now have lost D Chaz Reddekopp.“Chaz will be out for the rest of the regular season, but you never know how these things heal,” Cam Hope, the Royals’ general manager, told Cleve Cheensaw of the Victoria Times Colonist.Reddekopp suffered a broken foot while blocking a shot in Wednesday’s 3-1 loss to the Tigers in Medicine Hat and didn’t play in Friday’s 5-4 shootout loss to the Hurricanes in Lethbridge. The 6-foot-4, 220-pound Reddekopp was a seventh-round selection by the Los Angeles Kings in the 2015 NHL draft.“Obviously, he’s a big piece of our blue-line,” Reddekopp said. “But injuries happen. That’s why we have the depth we do. The other guys stepped up (Friday in Lethbridge).”The Royals completed a three-game swing into the Central Division with a 4-1 victory over the Kootenay Ice in Cranbrook on Saturday night. Victoria went 1-1-1 on the trip.——

The Prince Albert Raiders were without F Kolby Johnson on Saturday night after he was hit with a TBD suspension after incurring a charging major and game misconduct for a hit on F Orrin Centazzo of the Everett Silvertips in a Friday game.Centazzo was scratched from Everett’s lineup as it completed an East Division swing in Swift Current against the Broncos last night. Jesse Geleynse of the Everett Herald tweeted Saturday that Centazzo will miss “some time.”


Here another GIF showing more of Johnson's approach. At the risk of homerism, this is 5 minutes and a suspension for being big and strong pic.twitter.com/ixCeRb2F7y— Jeff D'Andrea (@Jeff_paNOW) February 18, 2017

The Raiders weren’t happy with the penalty to Johnson, who apparently first was given a minor penalty.According to Jeff D’Andrea of pa.NOW, referees Jonathan Spurgeon and Cody Rude “didn’t give the major penalty right away. . . . A minor was up on the clock for at least three real-time minutes while the officials talked to the Raiders’ bench first, and then the Silvertips' bench. After talking to both head coaches, Spurgeon and Rude then conferred in front of the scorer’s table and changed the call from a minor to a major.”Marc Habscheid, the Raiders’ head coach, wasn’t impressed.“You know what?” D’Andrea quoted Habscheid as saying. “I’ve been in this game a long time. (Associate coach) Dave Manson’s been in the game, and (skills coach) Mark Odnokon and (assistant coach) Brandin Cote, and not one of us has seen that before. It’s one thing to make a call, but I’ve never seen a call made, then go to the bench with a foul, and then go back and change the call. I’ve never seen that. I’ve never seen that in my life.”Johnson, who was acquired from the Prince George Cougars as part of a Nov. 18 deal that sent D Brendan Guhle the other way, is a repeat offender. Johnson served a four-game suspension in December after taking a headshot major.——If you enjoy stopping off here and would care to make a donation to the cause, please feel free to do so by clicking on the DONATE button and going from there.If you have some information you would like to share or just a general comment, feel free to email me at greggdrinnan@gmail.com.———

At Brandon, G Ian Scott turned aside 33 shots to help the Prince Albert Raiders to a 4-1 victory over the


Fun facts: last time the Canes lost at home in regulation was November 16 vs the Kootenay Ice. A record of 16-0-1-1 over that stretch. #YQL— LethbridgeHurricanes (@WHLHurricanes) February 19, 2017

At Lethbridge, F Matt Alfaro scored three goals and added an assist to lead the Hurricanes to a 6-2 victory over the Saskatoon Blades. . . . Alfaro, who has 18 goals, gave the Hurricanes a 1-0 lead at 5:08


Scoring his 25th of the season, #Oilers prospect Ethan Bear is the first @SeattleTbirds dman to hit that mark since @DeronQuint in 94-95.— TBird Tidbits (@TBirdTidbits) February 19, 2017

At Kent, Wash., D Ethan Bear had two goals and two assists to lead the Seattle Thunderbirds to a 5-3 victory over the Portland Winterhawks. . . . Seattle won with three third-period goals as it overcame a 3-2

At Swift Current, D Lucas Skrumeda scored at 2:53 of OT to give the Everett Silvertips a 3-2 victory over

At Kennewick, Wash., the Tri-City Americans scored the game’s last three goals, all via the PP, and beat

Saskatoon at Calgary, 4 p.m.Prince George at Kamloops, 5 p.m.Seattle at Portland, 5 p.m.
There has never been a subscription fee for this blog, but if you enjoy stopping by here, why not consider donating to the cause? Just click HERE. . . and thank you very much.