The Saskatoon Blades are losing money and they just might miss the playoffs for a fourth straight season. However, owner Mike Priestner says they aren’t going anywhere, nor is he interested in selling them. “I’m a thousand per cent patient,” he told Kevin Mitchell of the Saskatoon StarPhoenix in a story that is right here. . . . Priestner wouldn’t talk about the lawsuit that is making its way through the legal system asking that teams pay minimum wage and other benefits to players — there is a WHL directive instructing teams not to discuss it — but he does talk about wins and losses, profits and losses, and more.—— 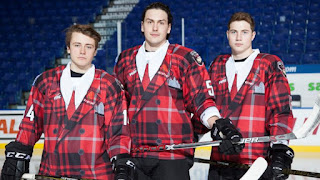 A tip of the cap to the Vancouver Giants for going the extra mile to promote organ donor awareness.The Giants are teaming up with Don Cherry, his family and the Kidney Foundation of Canada to hold Don Cherry Night on March 14 when the Giants play host to the Victoria Royals at the Langley Events Centre.From a Giants news release:“The Giants will wear special Don Cherry jerseys for the game as part of a national effort to increase both awareness and organ transplant rates by 50 per cent over five years. Canada has fallen to 23rd in the world in terms of organ donation rates, and approximately 4,500 Canadians are waiting for an organ with about 80 per cent of those needing a kidney. This is a cause that hits close to home for the Cherry family.”Don Cherry said: “When I was coaching the Boston Bruins, my son Tim had a transplant. Lucky for him, his sister, Cindy, gave him a kidney. We’re promoting organ transplants here, you can do your job, do your part, and step up to the plate.”——D Jacob Bernard-Docker, a fifth-round selection by the Swift Current Broncos in the WHL’s 2015 bantam draft, has committed to attend the U of North Dakota and play for the Fighting Hawks starting in 2019-20. From Canmore, Alta., Bernard-Docker has 20 points, including seven goals, in 52 games with the AJHL’s Okotoks Oilers.——The MJHL’s OCN Blizzard will be around for a while longer, after all. The Opaskwayak Cree Nation had announced that the Blizzard would be suspending operations before another season arrives. On Wednesday, however, the Blizzard announced that it has been saved. From a news release: “The Opaskwayak Cree Nation Chief and Council announced they’ve passed a motion to allow the OCN Blizzard Jr. A hockey club the opportunity to self-sustain in the Manitoba Junior Hockey League for the 2017-18 season, upon MJHL approval.” . . . The complete news release is right here.——If you enjoy stopping off here and would care to make a donation to the cause, please feel free to do so by clicking on the DONATE button and going from there.If you have some information you would like to share or just a general comment, feel free to email me at greggdrinnan@gmail.com.———

At Brandon, F Giorgio Estephan scored 46 seconds into OT as the Lethbridge Hurricanes beat the Wheat

At Edmonton, F Colton Kroeker and F Vince Loschiavo each had a goal and two assists to help the

At Kamloops, F Deven Sideroff scored at 1:52 of OT to give the Blazers a 5-4 victory over the Seattle Thunderbirds. . . . All four games of the season series went to extra time, with each team going 2-0-2. . . . Kamloops won twice in OT; Seattle won once in OT and once in a shootout. . . . Kamloops G Connor

Ingram made a right pad save on Sea F Donovan Neuls, who had gotten away from Sideroff to go in alone, moments before Sideroff went down the right side and scored the winner, his second goal of the game and 35th this season. It was his 10th game-winner, tying him for the WHL lead with F Tyler Wong of the Lethbridge Hurricanes. . . . Ingram got the lone assist on the winner, his third assist this season. Those assists have come in his past seven games after he went 146 games before getting No. 1. . . . Sideroff’s fifth OT goal this season ties the WHL’s single-season record. He now shares that mark with F Eric Fehr, who did it with the 2004-05 Brandon Wheat Kings. . . . If you’re wondering, F Brian Propp of the Wheat Kings holds the single-season record for game-winning goals (16), from 1978-79. . . . Kamloops took a 1-0 lead at 8:47 of the first period when F Garrett Pilon’s centring pass was deposited into the Seattle net by Thunderbirds F Ryan Gropp, a Kamloops native who, barring playoffs, was playing his last WHL game in his hometown. . . . Pilon has 18 goals. . . . The Blazers went up 2-0 at 9:41 when F Luc Smith scored No. 11. . . . Seattle tied it on a pair of Gropp goals, at 11:15 of the first and 18:11 of the second period. He’s got 31 goals. . . . F Keegan Kolesar gave Seattle a 3-2 lead at 3:22 of the third period. . . . Kamloops D Dallas Valentine (2) tied it at 5:30 and Sideroff put his guys out front at 10:02. . . . The Thunderbirds forced OT when Kolesar scored his 24th goal, with 12.4 seconds left on the clock and G Rylan Toth on the bench for the extra attacker. . . . The Blazers got two assists from each of F Rudolfs Balcers and F Quinn Benjafield, while Pilon added one. . . . F Mathew Barzal had three assists for Seattle, with Gropp picking up one. . . . Ingram finished with 31 saves, three more than Toth. . . . Seattle was 0-3 on the PP; Kamloops was 0-4. . . . The Thunderbirds were without D Jarret Tyszka, F Scott Eansor and D Ethan Bear, three top-end skaters who are sidelined with injuries. They had D Jake Lee, 15, from Sherwood Park, Alta., and F Ian Briscoe, 17, from Winnipeg, in the lineup. . . . The Blazers (38-21-6) had lost their previous two games. With this victory, they clinched a playoff spot and moved to within three points of the B.C. Division-leading Prince George Cougars. . . . The Thunderbirds (40-18-6) have points in three straight (2-0-1). The loser point allowed them to move into a tie with Everett atop the U.S. Division. . . . Announced attendance: 3,560.——At Kelowna, F Calvin Thurkauf scored two goals and set up another to lead the Rockets to a 5-1 victory

At Prince Albert, the Medicine Hat Tigers scored the game’s last three goals, including one in OT from F

Calgary at Brandon, 7:30 p.m.Kelowna at Everett, 7:35 p.m.Vancouver at Portland, 7 p.m.Lethbridge at Prince Albert, 7 p.m.Kamloops at Prince George, 7 p.m.Medicine Hat at Regina 7 p.m.Kootenay at Saskatoon, 7:05 p.m.Tri-City vs. Seattle, at Kent, Wash., 7:35 p.m.Spokane at Victoria, 7:05 p.m.
There has never been a subscription fee for this blog, but if you enjoy stopping by here, why not consider donating to the cause? Just click HERE. . . and thank you very much.