Dan Lewis, the long-time libero and key member of Canada’s National Team program, is hanging up his jersey and turning his attention to coaching this year.

Now 41, Lewis has had a legendary playing career that spans more than 25 years and includes a stint on the sand at the 1999 Pan Am Games in Winnipeg.

Originally from Oakville, Ontario, Lewis started his volleyball path at the University of Manitoba, winning CIS (now USports) championships and being named MVP in 1996, among other accolades. Professionally, he played in France, Poland and Slovenia, but it was with the National Team that he made such an impact – on the program and with his teammates.

“If you went around the world and asked all the teammates he’s ever had who their most memorable teammate was, Dan would land at the top of a lot of those lists,” said Team Canada’s Fred Winters. “He is the life of the party, the centre of attention, and a guy you hate to play against, but love to play with. Basically, he’s a player you’d want in the trenches with you because when it was time to go to war you knew you were going to get his best effort. I love Dan Lewis and he is one of the greatest persons I’ve had the privilege of knowing.”

Lewis, who switched to playing libero in 2006, counts qualifying for the Olympics after a 24-year drought; and wins against Brazil and Russia in past World Leagues as memorable highlights on the court.

“On a more personal level, a very memorable chat prior to those big wins was a random meeting I had with Glenn (Hoag) at World League around 2008,” remembers Lewis.  “After many defeats, I was facing despair thinking about quitting and he opened up about part of his ‘Why?’….  Why and how he pushes on against adversity, against all the odds.  It was his patriotism, courage and love of his people that helped me connect again, and understand that it wasn’t about me, but about us; about the team, the staff, all the people of Canada, all the players before and all that will come after. His revelation helped me understand that my goal was bigger than just about the individual, and it gave me the strength to continue on, to dig deeper, look past the current outcomes and connect to a much greater source of will to continue on.” 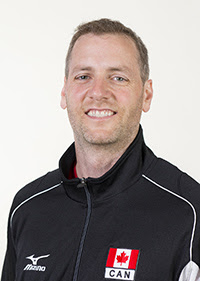 Lewis was also inspired by his family – parents Pat and Joe and siblings Kelly and Derek were a huge support throughout his time playing. “And my wife Jessica has endured more volleyball ramblings than any rational person should be exposed to,” says Lewis – the father of William and Naomi who “have become instant volleyball fans.”

He also gives a shout out to “every coach, teammate and staff member I have ever had an opportunity to work with, good or bad, regardless there was always an important lessons to learn and you helped me become a better person, thank you! Special thanks to everyone who made the Rio Olympics a reality for the program, no role is too small to be remembered.”

Lewis was not on the final roster for Rio 2016, but joined the team as a vital staff member during its Olympic campaign, finishing fifth overall.
He also hasn’t forgotten past Olympians who made an impact on his career:
“Making a positive impression on someone is a great gift to them, so a special thanks to Mark Heese and John Child, whose dedication to the beach game helped ignite a young volleyball player’s competitive fire, and to Glenn Hoag for later guiding that passion.”

Lewis is now excited to continue working with the National Team program, with a focus on running the men’s National Excellence Program in Gatineau, and assisting on the senior men’s team side.

Leadership is nothing new to Lewis, and his now former teammates support his transition to the staff role. “Dan was the consummate professional who worked hard in the weight room, was never one to shy away from confrontation, and was a very good communicator whether it was with his teammates, coaching staff, or some locals we happened to catch a few pints with after the games were done,” explained Winters. “Everyone could see that he had a real passion for training and developing his skills, so it’s an obvious transition for him to join the coaching ranks. I wish nothing but success and happiness to him in his next chapter.”