HUGE CONGRATULATIONS to @myles_mattila12 as he receives a $500 Scholarship from @HockeyCanada at the @HC_TELUSCup National Championship!— Cariboo Cougars (@cariboocougars) April 30, 2017

If you don’t recognize the name Myles Mattila, you should get to a computer and do a search.While his Prince George-based Cariboo Cougars won’t play in the TELUS Cup final today (Sunday), Mattila is a winner because of his dedication to spreading the word on mental health.From a hockeycanada.ca story by Derek Jory:“(Mattila) began volunteering at a local mental health office and participating in youth programs, and he’s now a mental health advocate for Mindcheck.ca, partners with the Canadian Mental Health Association and the driving force behind Mindright.info, a health wellness program designed to educate Cariboo Cougars players, coaches, parents, and supporters about their mental health and the health of others.”Why did Mattila get so involved in this issue? All because he noticed a few years ago that a long-time friend was struggling.“It was tough seeing such a good friend go through that and not knowing what was wrong,” Mattila told Jory. “He needed help and it was eye-opening for me not knowing what to do. I realized he likely wasn’t alone in this situation and I vowed to figure out how to help him and anyone else struggling with mental health issues.”On Saturday, Mattila spoke about mental health awareness at the TELUS Cup awards dinner in Prince George, where he is a Grade 12 student. He also received a $500 Esso Kids Scholarship Award from Hockey Canada.
Remember his name. You’re going to be hearing a lot about him down the road.Jory’s story about Mattila is right here.——The WHL could have its Ed Chynoweth Cup finalists decided today (Sunday) when the conference finals resume. 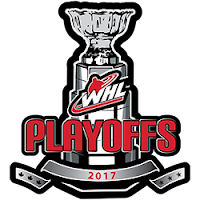 Seattle at Kelowna, 5:05 p.m. (Seattle leads, 3-2)Regina at Lethbridge, 6 p.m. (Regina leads, 3-2)
There has never been a subscription fee for this blog, but if you enjoy stopping by here, why not consider donating to the cause? Just click HERE. . . and thank you very much.