G Michael Garnett (Red Deer, Saskatoon, 1999-2002) has signed a two-year contract with the Nottingham Panthers (England, UK Elite). This season, with Medvescak Zagreb (Croatia, KHL), he was 3.15, .903 in 17 games. Garnett will attend Loughborough University while playing for the Panthers.———

With the Memorial Cup having ended Sunday and with the host Windsor Spitfires having won it all without winning even one round in the OHL playoffs, there has been much debate about the tournament’s format.This week, I received an email from a WHL fan, one who is knowledgeable and a season-ticket holder.Here’s what this fan wrote: 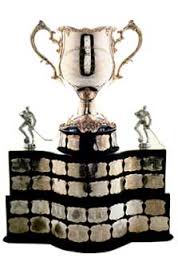 “I have been reading your various comments about the Memorial Cup (attendance problems, idea for a format change), and thought I’d give you a perspective from purely that of a junior hockey fan who has zero interest in this event. Yes, the ticket prices as quoted are high, but in my view that’s definitely not the only issue or even the main issue.
“My sole reason for lack of interest in the event is that it’s an exhibition event, not a championship. What you have are three teams who have to play well enough in the regular season to make the playoffs, then win four best-of-seven series in their respective leagues, plus one team that doesn’t have to do any of that.“The single biggest requirement for competition in sports is a level playing field — all teams playing by the same rules and starting from the same place. The Memorial Cup, by allowing a host team in the tournament, violates that basic tenet, which renders the ‘championship’ meaningless.“The Windsor Spitfires could have theoretically gone 0-68 this season and ended up in the same place. In fact, by getting knocked out in the first round of the OHL playoffs, one could argue that they had an advantage over the other teams by being well-rested and avoiding injuries. They also had a chance to recover before the tournament, unlike the other three teams that each had to play 20-some games to get there and then had four or five days rest (and had to travel during that time).“If I were a Windsor player or fan, winning the Memorial Cup would feel like a hollow victory, because the team was given the unfair advantage of a head start and didn’t have to accomplish other things along the way usually necessary to win a championship.“Think of the Stanley Cup — if prior to the start of the season, one team was already guaranteed a berth in the final. That’s what the Memorial Cup is and that renders it exhibition hockey without any real meaning. “Personally, I only am interested in games that count for something, regular season or playoffs, but not games that somehow don’t count in at least some way on the road to winning a title.“The other issue with the whole ‘host team’ designation is that it forces the host team to mortgage the future and make maybe unnatural moves during a pre-determined season. I dread that my hometown team (Victoria Royals) one day plays host to the event as they’ve been rumoured to be bidding on a couple of times.“Facing years of futility (like the Saskatoon Blades are going through now after being the host team in 2013) just to build up for one shot at winning an exhibition tournament is about the worst trade-off one could make. If the Royals ever play host to the event, I won’t be attending, and knowing what would happen to the team in the years following, I would probably give up my season tickets rather than pay to watch a few seasons of a subsequently bad team, especially given the reason they’d be bad.“So for me the only solution is to go back to a three-team format with the winners of each league, which would be a true CHL championship.“The difficulty with respect to fan interest is that unlike other leagues/sports, there’s no connection between the three CHL leagues. The teams don’t play each other, and there’s little player movement between leagues.“The closest parallel I can think of is baseball prior to inter-league play. However, there you at least had player movement between the American and National leagues, so the leagues were connected. The CHL has none of that, and as a WHL fan I pay virtually no attention to the Ontario or Quebec leagues.“Even so, a chance to be crowned CHL champion in a three-team affair would mean something — I know it did to me when the Victoria Cougars went there in 1981. However, the chance to win an exhibition tournament just doesn’t generate any interest, at least not from me.”——The Edmonton Oil Kings have traded for G Travis Child, who will turn 20 on June 13, from the Brandon Wheat Kings for a conditional fifth-round selection in the 2018 bantam draft.Child, from Killam, Alta., was acquired by Brandon, along with D Kade Jensen and a second- and fifth-

round 2019 bantam draft picks from the Swift Current Broncos for G Jordan Papirny and a 2018 fourth-round draft pick.Child was 4-3-1, 2.84, .894 in nine appearances with Brandon. With the Broncos, he had been 13-3-3, 3.03, .902 in 24 games.The Wheat Kings are left with four 20s on their roster — G Logan Thompson, D James Shearer, F Meyer Nell and Jensen.Child joins three other goaltenders with WHL experience on the Oil Kings’ depth chart. Patrick Dea, 20, has played in 123 regular-season games; this season, he was 19-31-3, 3.86, .882. Liam Hughes, 18, got into seven games this season (1-4-2, 3.26, .895) but missed a lot of time due to injury. Josh Dechaine, 19, saw action in 17 games as a freshman this season (3-8-1, 4.41, .876).The Oil Kings now have five 20s on their roster — Child, Dea, F Adam Berg, F Jesse Roach and F Colton Kehler.Goaltenders have become rather popular as trade targets in the last while, with four of them having been moved. Other than Child, Jordan Hollett, 18, went from the Regina Pats to the Medicine Hat Tigers; Nick Schneider, 20, moved from Medicine Hat to the Calgary Hitmen; and Mario Petit, 20, was dealt by the Everett Silvertips to the Kootenay Ice.——NHL teams have until today (Thursday) at 5 p.m. ET to sign players selected in the 2015 draft or they will be eligible to be selected in the 2017 draft.The Columbus Blue Jackets revealed Wednesday that they won’t sign D Sam Ruopp of the Prince George Cougars, while the Vancouver Canucks earlier said they wouldn’t be signing Cougars D Tate Olson.Other players from that draft who have yet to sign are F Giorgio Estephan of the Lethbridge Hurricanes (Buffalo Sabres), F Matt Bradley of the Regina Pats (Montreal Canadiens), F Brad Morrison of the Cougars (New York Rangers), F Glenn Gawdin of the Swift Current Broncos (St. Louis Blues), and F Matteo Gennaro of the Calgary Hitmen (Winnipeg Jets).——Peter Toigo has been named assistant general manager of the Vancouver Giants. Toigo had been the organization’s vice-president of operations. . . . “Peter has worked in the capacity of assistant general manager since I arrived last year,” Giants GM Glen Hanlon said in a news release. “I believe that now is a good time to formally announce Peter’s expanded role as we move forward. We feel good about the direction that the team is going in, and Peter has been a big part of that plan.” . . . Toigo, who has a bachelor’s degree in business administration from Gonzaga U in Spokane, has been with the Giants since 2008 when he was director of team services. He was named vice-president of operations in 2011 and will continue in that role while also being the AGM. . . . Toigo’s father, Ron, is the Giants’ majority owner.——The Spokane Chiefs have signed F Cedric Chenier, 17, to a WHL contract. Chenier, from Winnipeg, was a ninth-round selection in the 2015 bantam draft. This season, he had 65 points, including 30 goals, in 43 games with the midget AAA Winnipeg Wild. That was good enough to win the Manitoba Midget Hockey League scoring title. He added 16 points, including 13 assists, in 11 playoff games as the Wild won the MMHL championship.——The Brandon Wheat Kings have signed F Jonny Hooker, who will turn 16 on Oct. 3, and D Neithan Salame, 16, to WHL contracts. . . . Hooker, a Winnipegger, was an eighth-round pick in the 2016 bantam draft. Hooker had 30 goals and 12 assists in 30 games with the Rink Hockey Academy midget prep team this season. . . . Salame, from Edmonton, was a seventh-round pick in the 2016 bantam draft. This season, he had two goals and 12 assists in 34 games with the midget AAA Edmonton Knights of Columbus Pats.——If you’re a regular here, and even you aren’t, feel free to contribute to the feeding of the Drinnan family by making a donation to the cause. You are able to do so by clicking on the DONATE button and going from there.BTW, if you want to contact me with some information or just feel like commenting on something, you may email me at greggdrinnan@gmail.com.I’m also on Twitter (@gdrinnan).———

Oliver David has left the Portland Winterhawks’ coaching staff to take over as the head coach of the USHL’s Dubuque Fighting Saints. . . . David, 38, spent one season with the Winterhawks, having joined them from Dubuque, where he had been the assistant GM and associate coach. . . . The Fighting Saints were 108-61-2-9 with David on their staff. . . . David takes over from Jason Lammers, who moved to Niagara University as the head coach of the Purple Eagles. . . . The Winterhawks now are looking for an assistant coach to work alongside Mike Johnston, their vice-president, GM and head coach, and associate coach Kyle Gustafson.——As you tossed and turned in bed last night, you were trying to figure out who is coaching the KHL’s Dinamo Minsk. Admit it. You were, and it kept you awake. Well, Patrick Conway has come to the rescue. . . . The Stanley Cup final maybe two games old, but KHL training camps for 2017-18 are on the horizon. Conway starts his previews with a look at the coaches in the West Conference with the six teams in Bobrov Division, and it’s right here.———