May 30, 2017, Victoria, BC (ISN)- If Tuesday night is any indication of things to come, the stands at Royal Athletic Park may be filled with chants of “BER-NIE! BER-NIE!” this season, as the HarbourCats first ever Taiwanese player – Huang Po Hao (AKA Bernie) – had a five-RBI night to lead the ‘Cats to a 9-2 win over the Victoria Mavericks in an exhibition baseball game at Royal Athletic Park.

Huang got things going in the very first at bats for the HarbourCats, as he turned on a pitch from Mavericks starter Colton Wood and deposited it over the right field fence to give the ‘Cats a 2-0 lead.

He would follow that up with an RBI-single in the fifth and a two-RBI single in the sixth and the HarbourCats were off to a comfortable 5-0 lead.

A two-run HarbourCats seventh inning, punctuated by an RBI-single from celebrity call-up Chris Johnstone, extended the lead to 7-0. Johnstone, a long time HarbourCats sponsor with Freedom 55 Financial, played college ball when he was at Queen’s University and filled in a much needed roster spot for the HarbourCats who were only sporting a handful of regular players for the game. 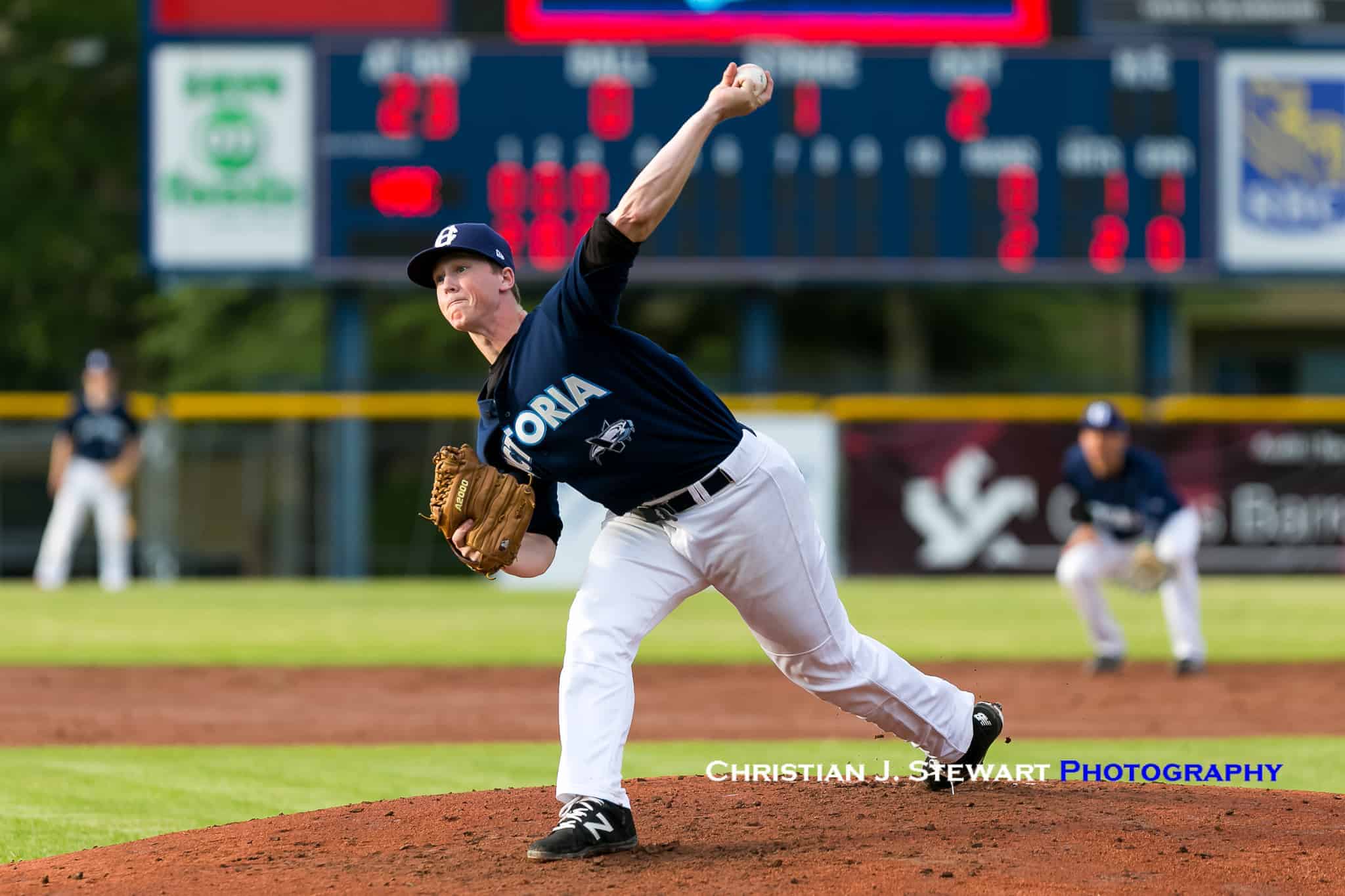 Johnstone acquitted himself well in his West Coast League debut, getting on again later with a bunt single, stealing a base, scoring a pair of runs and making a great leaping catch in left field to take an extra-base hit away from the Mavericks.

Speaking of the Mavericks, they are comprised of many of the players that will be representing Victoria as the host team at the 2017 Senior Men’s Nationals that will be held at RAP at the end of August.  They include long-time Maverick League veterans such as Lanny Burrows, Sean Murphy, Shawn Loglischi and Bobby Scott, and a handful of younger players who are familiar to the Victoria baseball community through their previous time with the Victoria Mariners and Victoria Eagles of the BC Premier Baseball League.  These include Brendan Turcotte, Martin Eckard, Brendan Somers, Wood, Chris Fougner and Conner Russell.  Russell and Fougner are also former HarbourCats.

Tuesday’s game was also the debut for the new HarbourCats coaching staff of Head Coach Brian McRae, Assistant Coach Jason Leone and Pitching Coach Mike Spears and by all accounts they liked what they saw, especially on the mound, where nine different hurlers saw action, shutting the Mavericks down and allowing just their two runs on eight hits in the 12 innings of action.

That included 2016 HarbourCats returnees Greg Casper and Indigo Diaz and a notable HarbourCats debut from George Mason University’s Ryan Ricci, who spent most of Tuesday flying to Victoria from Virginia, arrived at the ballpark at 5:30 pm and then, jet lag and all, threw two pitches and made two outs in his inning of work.  Reality then set in and he took a few more pitches to get out number three, but kept the Mavericks off the board.

Other notables on offence for the HarbourCats Tuesday included outfielder Connor Whitney (Park University) who had three hits, a pair of walks and scored four runs and Justin Orton (UBC) with a pair of hits.

Things begin for real for the HarbourCats on Thursday as they begin their 2017 West Coast League season with a trip across the water to play the Port Angeles Lefties and then continue on to Yakima, Washington where they begin a three game set with the Pippins on Friday, June 2.  The ‘Cats then return to RAP on Monday June 5th for the home opener against the Wenatchee AppleSox on Monday June 5.

Game time for the opener is 6:35, but you will want to arrive early for the pre-game festivities and for those sporting general admission tickets, to snag a good seat, as the HarbourCats are anticipating another opening day crowd somewhere in the range of 5,000 people.