June 25, 2017, Victoira, BC  (ISN) – The Victoria HarbourCats overcame a 6-1 deficit to tie the game 6-6 heading into the ninth inning, only to see the Walla Walla Sweets score a run in the top of the ninth and escape with a 7-6 win in West Coast League (WCL) action Sunday, in front of a big crowd and a gathering of canines on a beautiful and hot Sunday “dog day” afternoon at Royal Athletic Park (RAP) in Victoria. 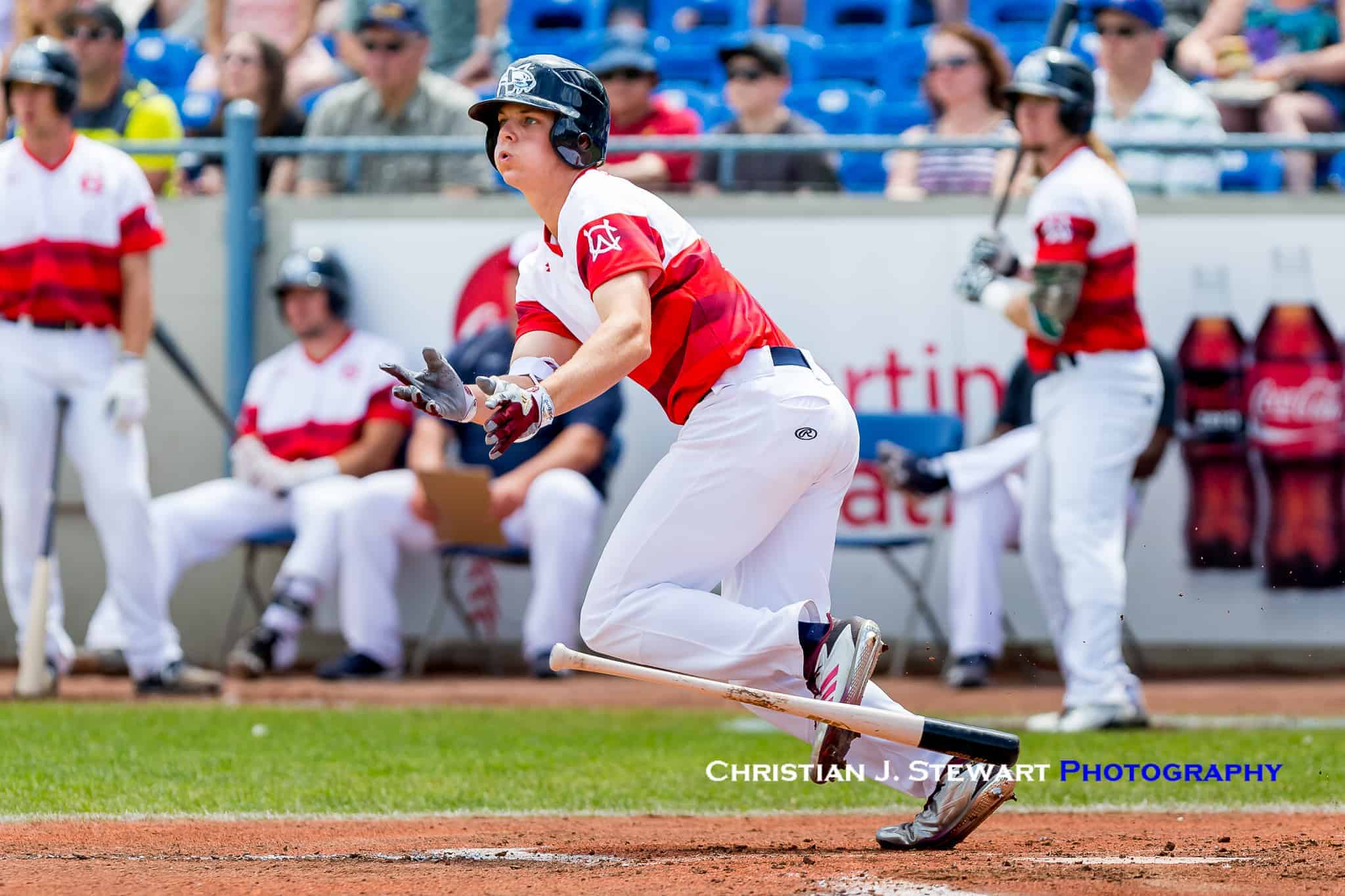 Walla Walla came out swinging early on “Bark in the Park” Day at RAP, scoring two runs in the top of the first inning off of HarbourCats starter Isaac Mullins, thanks to an RBI double from Jake Suddleson that scored Ryan Johnston (walk) and an RBI single from Cameron Deere that plated Suddleson. 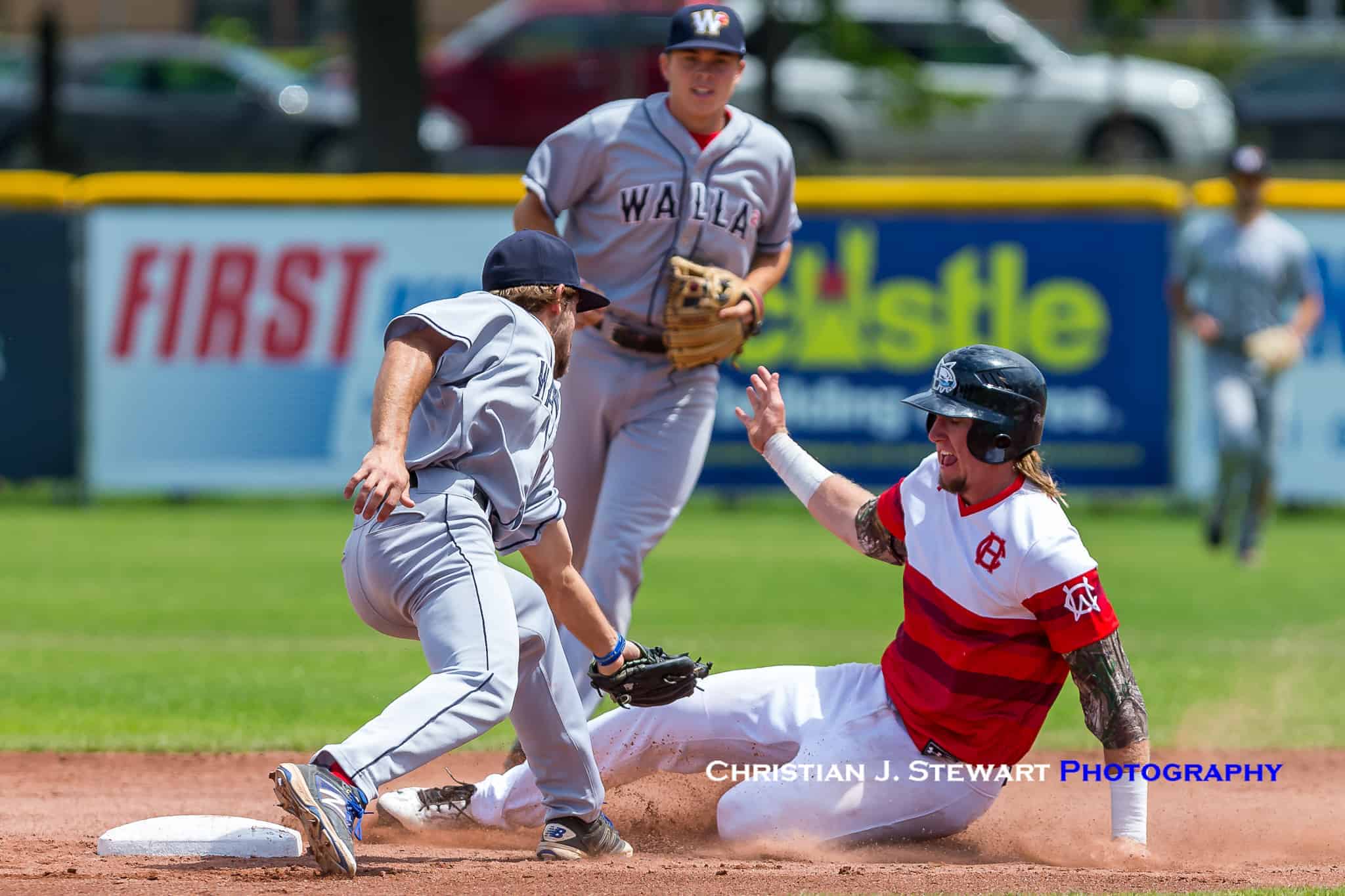 The Sweets would strike again in the top of the third, courtesy of an RBI single from Nick Nyquist that scored Johnston and another RBI hit from Sudleson to score Vinny Capra. Two more in the sixth would move the lead to 6-1 giving the Sweets a big cushion to work with.

Victoria’s only run and hit to that point, was in the bottom of the third, thanks to an opposite field home run by Nick Moroney that came off Walla Walla starter Matt Amrhein. 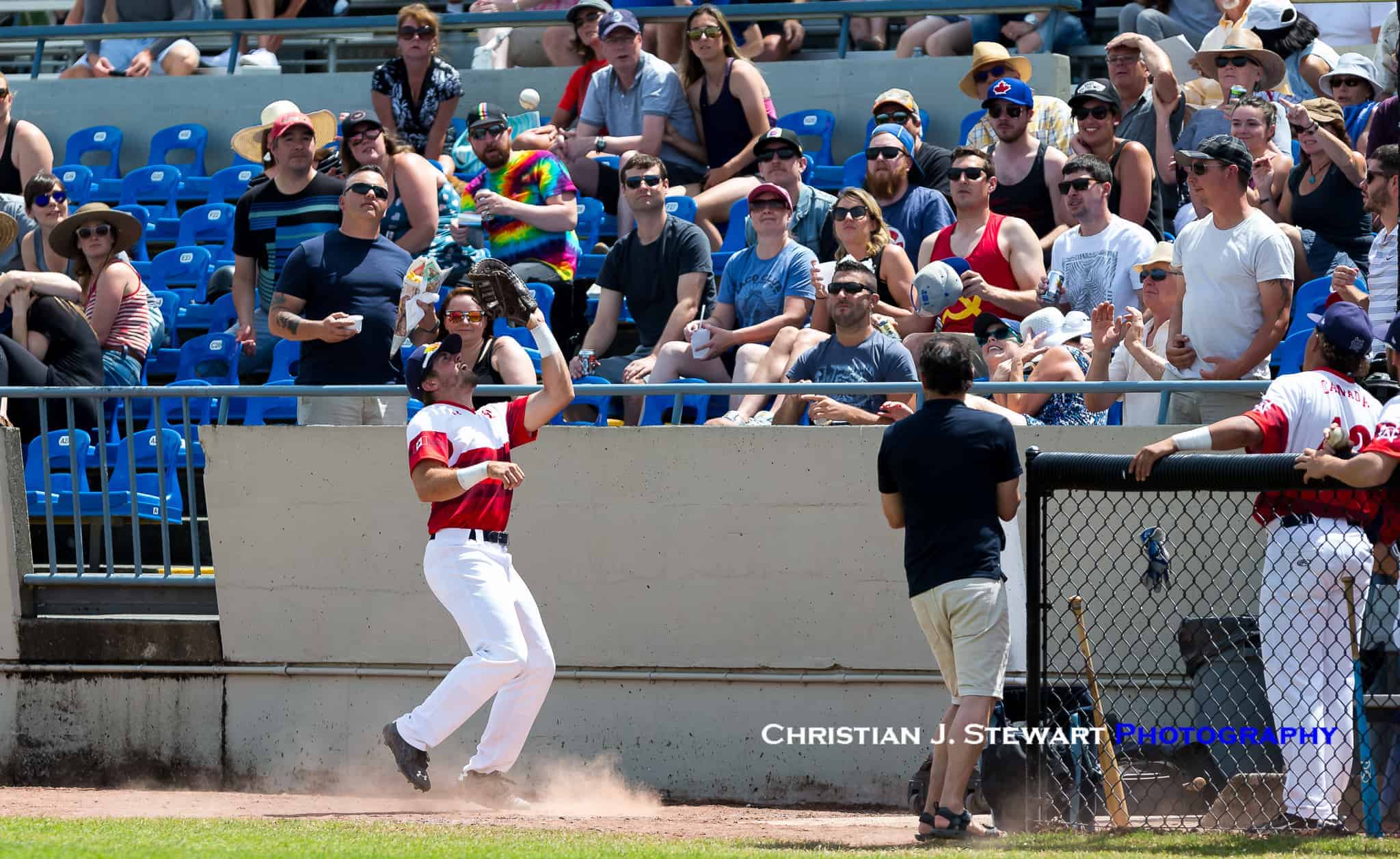 Victoria first baseman Tucker Johnson prepares to catch a foul ball for what should have been an out, but much to the chagrin of HarbourCats fans and coaches, he was ruled to have caught the ball out of play despite being a good six feet clear of the out of play line on the dirt and on the wall (behind the person in the blue shirt) (Photo: Christian J. Stewart)

Amrhein, whose only damage prior to that had been a walk and a hit batter in the first, went on to pitch 4.2 innings, finishing with the one run on one hit, while striking out four. 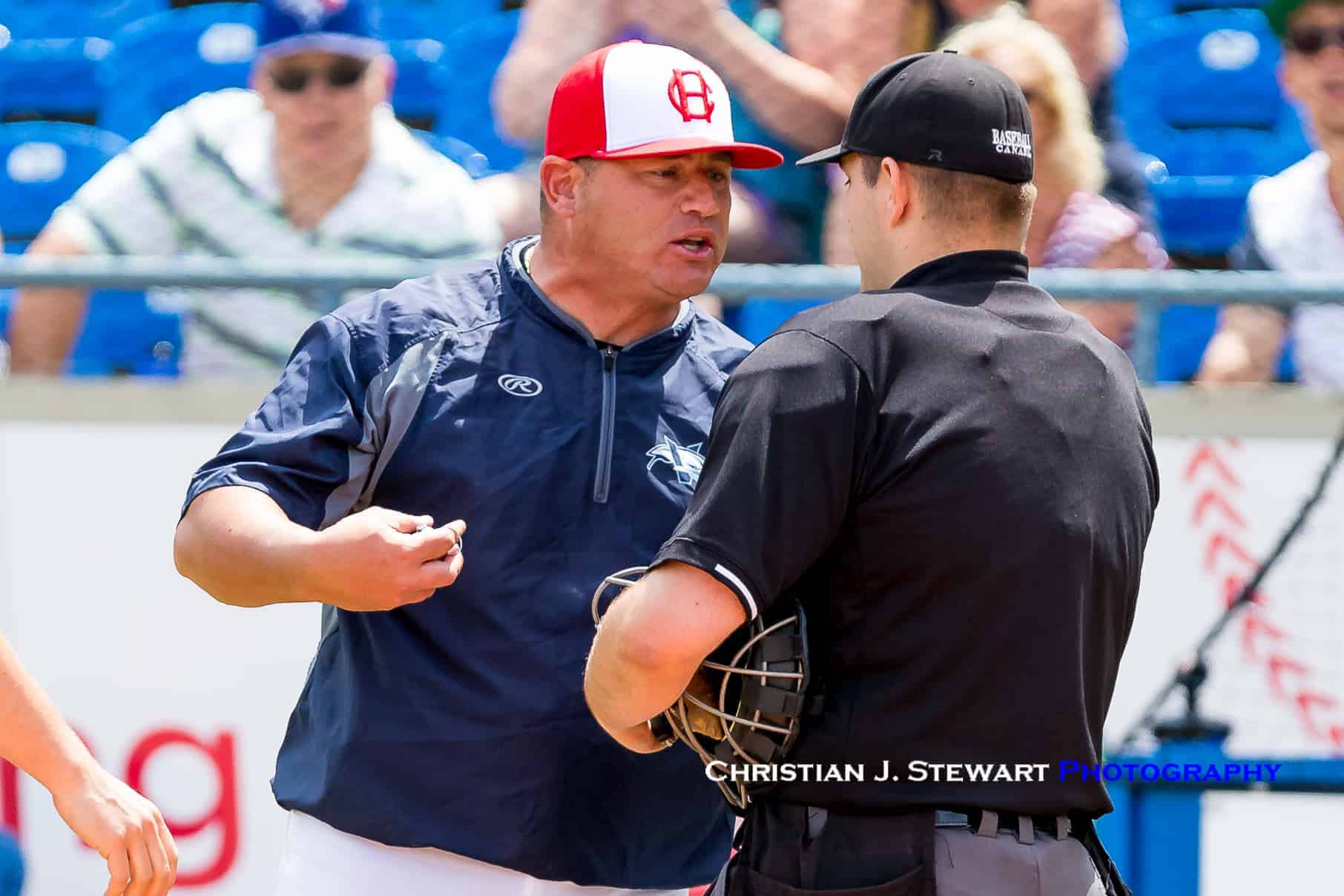 Amrehein would be relived by Chris Lincoln and he was just as effective to begin, mowing down six in-a-row before walking pinch-hitter Cole Weiss, Shane McGuire and Nick Moroney in the seventh to get himself into some trouble. A two-RBI single from Hunter Vansau then pulled the Cats to within three at 6-3, ending Lincoln’s day.

Haydn King then took over for the Sweets and got Davis Wendzel to ground out to third, ending the HarbourCats threat. 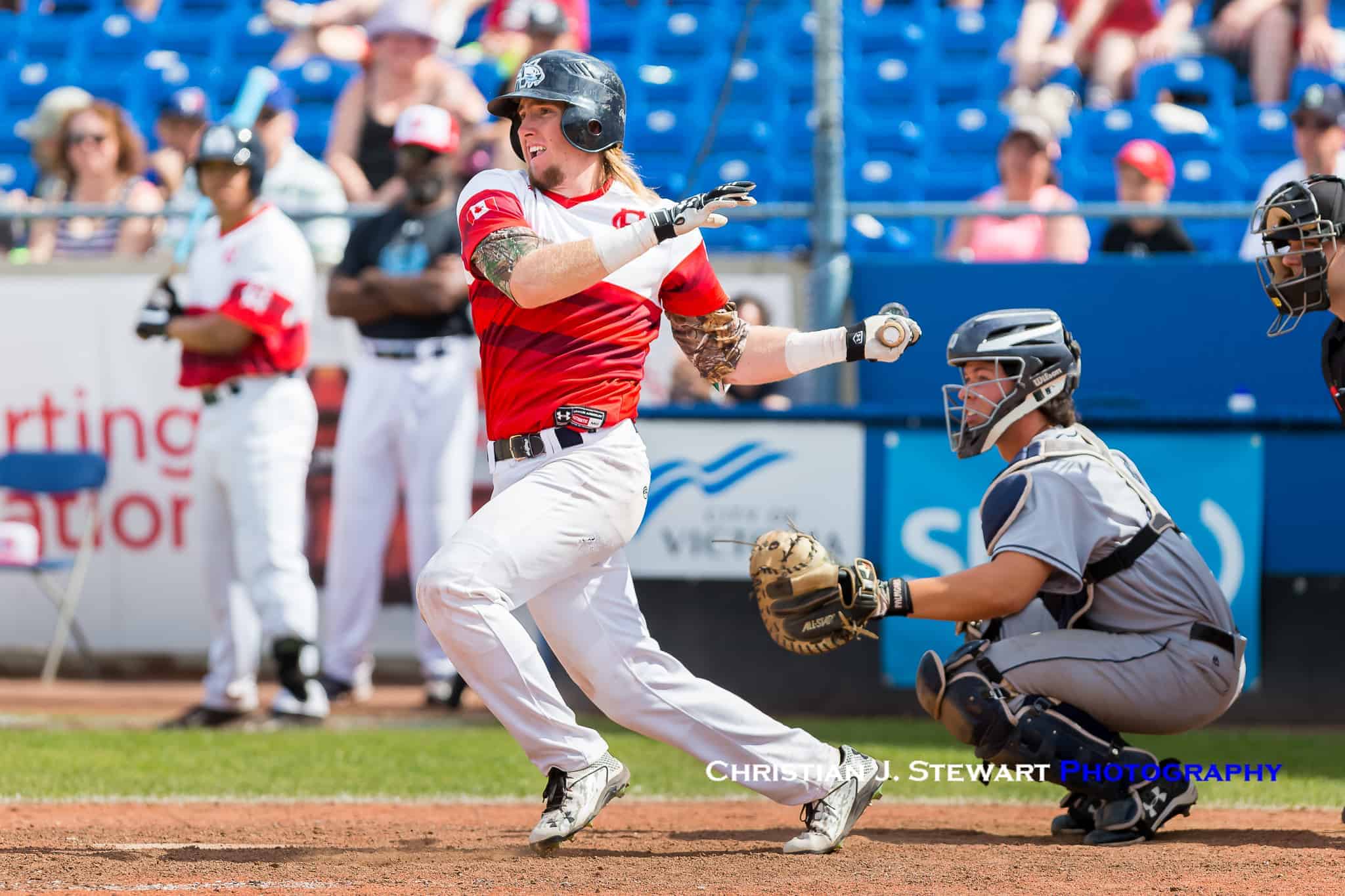 Davis Wendzel gave Victoria some hope with a ninth inning single, but would be left stranded as the ‘Cats fell 7-6 to Walla Walla (Photo: Christian J. Stewart)

The ‘Cats would continue to push however and in the bottom of the eighth, pinch hitter DJ Porter reached on a single and Tucker Johnson was hit by a pitch to begin the frame. The HarbourCats then went to 6’4″ newcomer Harrison Bragg and he greeted reliever Scott Parker with a three-run blast over the right field fence to tie the game 6-6.

The comeback would all be for naught however, as closer Travis Kuhn was greeted in the ninth by a leadoff single from Viny Capra, who was then advanced to third on a one-out single from JJ Hancock. Capra would then score on a wild pitch to put Walla Walla ahead 7-6. 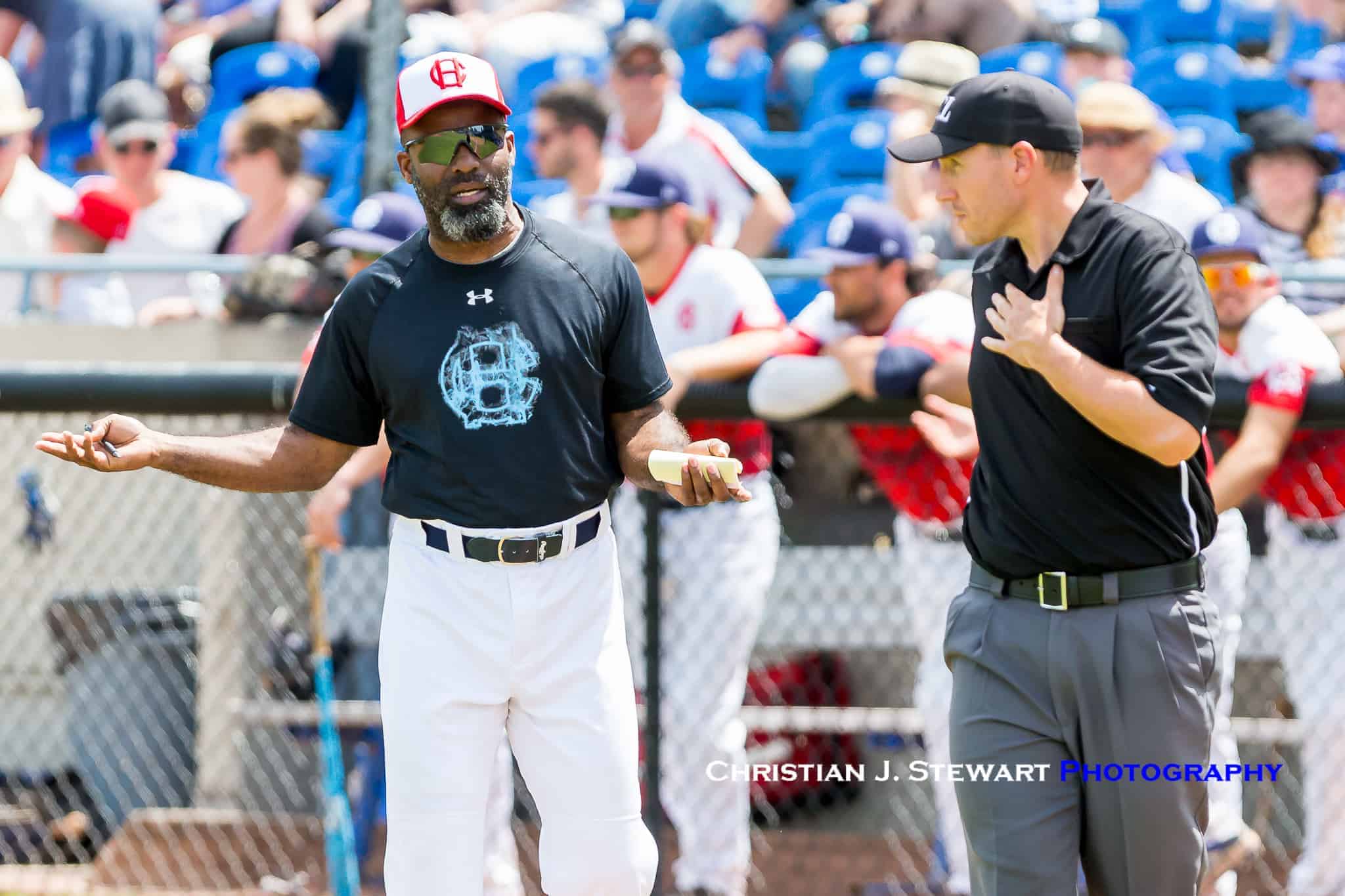 It was one of those days as HarbourCats Manager Brian McRae questions a call with umpire Scott Eckhardt (Photo: Christian J. Stewart)

The ‘Cats would get a single from Davis Wendzel in the bottom of the inning, but that would be it as Billy Dimlow closed out the 7-6 win with no further damage.

The win was the Sweets’ fifth in six games over the HarbourCats this season and moves them to 10-8, two games back of Bellingham for the Division lead. Victoria now drops to 10-12, four games off the pace.

The HarbourCats now hit the road to Corvallis for a three game set beginning Monday and then return to face Cowlitz at RAP on Thursday June 29th at 6:35 pm.