Canada’s Melissa Humana-Paredes and Sarah Pavan will get a shot at the bronze medal on Saturday at the FIVB Beach Volleyball World Championships after a heart-breaking tie-break loss today to the United States.

Canada came out strong, but couldn’t hold off the solid U.S. combo.

“After the first set, they got an early lead, they were really aggressive and our sideout really just wasn’t there and we weren’t defending as we normally do,” said Humana-Paredes. “We usually put them in a lot of trouble with our serves and are able to turn a lot of points, but in the second and third set, we were not doing that unfortunately.  We still have a chance at a medal and that’s what we’re going for!”

“We’re going to prepare hard tonight and do everything we can tomorrow because we do want to be on the podium. Coming in we said we wanted to be on the podium. Bronze is definitely not what we anticipated or wanted. We’re playing a great team (Larissa/Talita), we lost a really close one to them in Poland and we’re going to use that as motivation, we’re going to use today as motivation,” said Pavan, a 2016 Olympian. “We worked really hard this week, we played some great volleyball. It sucks that we didn’t play our best in the semifinal but if we can end this week on the podium and represent Canada up there, when all is said and done and this emotion is put away, I think we’ll be able to be happy about it.” 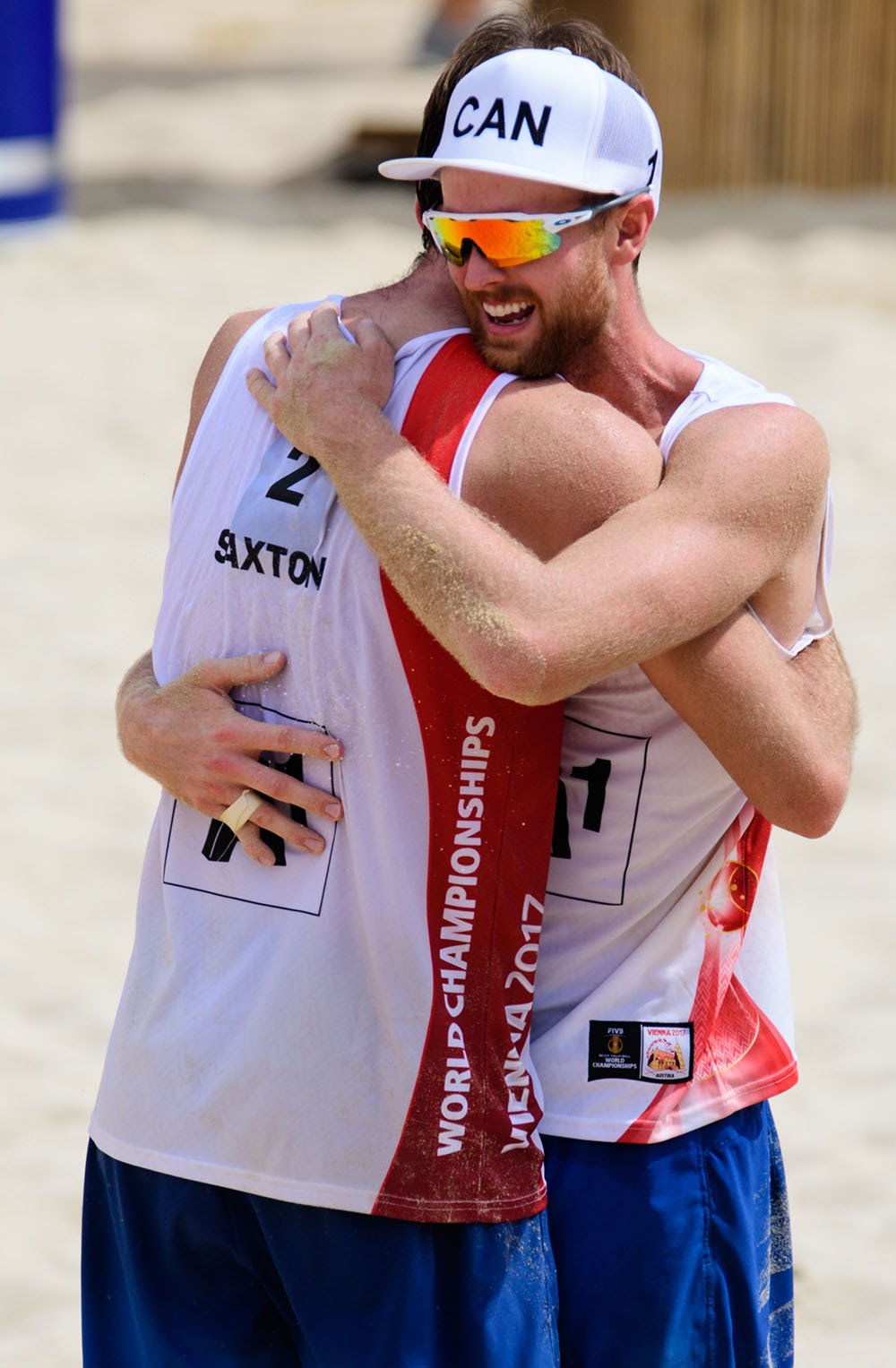 In what was deemed to be the upset of the day, Ben Saxton (Calgary) and Chaim Schalk (Red Deer, AB) posted a 2-1 (21-19, 19-21, 15-13) win in 55 minutesto eliminate fifth-seeded Alison Cerutti/Bruno Oscar Schmidt of Brazil, the reigning Olympic and world champions.  It was only the second win in 10 FIVB World Tour matches for Saxton and Schalk over the Brazilians.

“We stayed steady the whole time, we didn’t let them get any runs, more than one point at a time,” said Saxton. “That was the key, keeping our sideout game good and we’ll get one point here and there just the same as they were and it ended up going down to the wire. It’s up there, for sure. It’s the second time we’ve gotten to the quarters in Worlds beating the reigning Olympic and World Champions, that’s pretty good. We knocked them out, so I’d say that’s pretty big.”

The Canadians now face Evandro Goncalves/Andre Loyola of Brazil in the quarterfinals.

This is already Canada’s best showing at a Beach Worlds with four teams in the top 10.

There was a total of seven Canadian teams competing at the Worlds. Those previously eliminated are: