The Canadian Hockey League announced Wednesday the week three edition of the CHL Top-10 Rankings for the 2017-18 season.  The weekly rankings of the CHL’s Top-10 teams are selected by a panel of National Hockey League scouts.

The biggest move up of the week belonged to the Moose Jaw Warriors who kept their perfect record in tact with a 5-4 overtime win over the Regina Pats followed by a 4-2 victory over the Red Deer Rebels. Brayden Burke continued to lead the team with four goals and seven points through four games while Jayden Halbgewachs sits right behind him with three goals and six points in four contests. The Warriors made their debut on the CHL Top 10 Rankings this week after being listed as an Honourable Mention last week.

As the lone undefeated team in the entire Western Conference, the Victoria Royals made their debut on the Top 10 rankings this week, landing in the five spot. The Royals earned a pair of victories at home against the Kamloops Blazers over the weekend. What’s more impressive for the Royals is how spread out their offence has been, with Calgary Flames prospect Matthew Phillips, Dante Hannoun, Jared Legien and Ryan Peckford all at double digit point totals already. With Tyler Soy set to re-join the team this week, defences in the Western Conference have been put on notice.

The high-flying offence of the Portland Winterhawks continued to impress this weekend, showcasing their skills in a 6-2 win over the Seattle Thunderbirds before being shut down by the Prince George Cougars to end their perfect start to the season. That saw the Winterhawks drop two spots to sixth. Cody Glass, the first-ever draft pick of the expansion Vegas Golden Knights franchise, as well as New York Islanders first rounder Kieffer Bellows, continued to put up impressive numbers. Glass leads the team with five points through three games, followed closely by Bellows who has four. This was the third straight week the Winterhawks have found themselves listed on the CHL Top 10 Rankings.

After taking their first loss of the season, the Kelowna Rockets dropped one spot to seventh on the CHL Top 10 Rankings. The Rockets’ first loss came in the shootout against the Everett Silvertips. Vancouver Canucks prospect Kole Lind as well as Tampa Bay Lighting first round selection Cal Foote lead the Rockets with 10 and eight points respectively. This was the second straight week on the CHL Top 10 for the Rockets.

Listed as an honourable mention were the Swift Current Broncos, who have quickly established themselves as a strong contender in the Eastern Conference. The trio of CHL Player of the Week Tyler Steenbergen, Glenn Gawdin and Aleksi Heponiemi have already developed a reputation for being one of the best lines in the league, if not the country as the Broncos look to continue their charge up the standings. 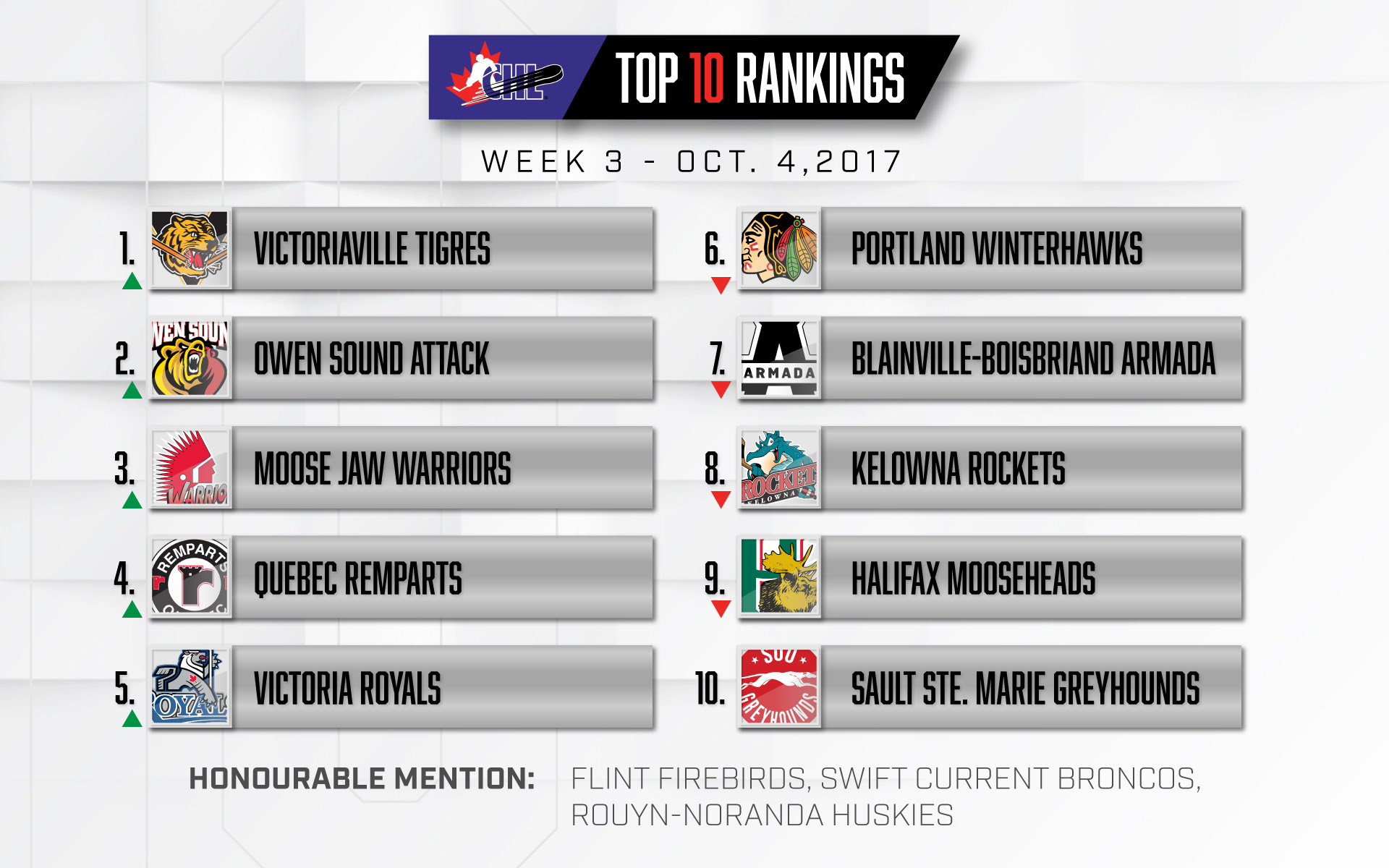