Toronto, ON – The Canadian Hockey League today announced the week four edition of the CHL Top-10 Rankings for the 2017-18 season.  The weekly rankings of the CHL’s Top-10 teams are selected by a panel of National Hockey League scouts.

As they continue to bombard their opponents with offence, the Victoria Royals ascended to the top spot in the CHL Top 10 rankings, moving up from the fifth spot last week. The Royals made their first trip out of the Lower Mainland last week, winning 8-3 over the Kelowna Rockets and 4-1 over the Kamloops Blazers. Tuesday, the club returned home to host the Tri-City Americans, who they beat 8-2.

Calgary Flames prospect Matthew Phillips continued to lead the Royals this week with 18 points in seven games, placing him three points off the league lead. This marked the second straight week the Royals have appeared on the list.

As the only other undefeated team in the Western Hockey League, the Swift Current Broncos made their season debut at the number two spot on the weekly rankings. The Broncos fought their way through a tough three-in-three stretch, defeating the Saskatoon Blades 6-2 on the road Friday, downing the Kootenay ICE 5-2 in their home opener Saturday and prevailing by a 4-3 score in a battle of undefeated clubs against the Moose Jaw Warriors Sunday.

Tuesday, the Broncos downed the visiting Lethbridge Hurricanes 6-2 with four third period goals. The trio of Arizona Coyotes prospect Tyler Steenbergen, Florida Panthers prospect Aleksi Heponiemi and Glenn Gawdin have continued their offensive assault on the league. Steenbergen sits first in the league with 15 goals and 21 points while Heponiemi sits one point behind him in the league’s points race. Not to be outdone, Gawdin sits fifth in the league for points with 16.

Also moving up in the CHL Top 10 rankings were the Portland Winterhawks, who moved up a single position to the fifth spot. The Winterhawks extended their winning streak to four games this week, outscoring their opponents 26-8. Cole Kehler, who was recently named the Vaughn CHL Goaltender of the Week, stopped 95 of the 98 shots he faced in three of those games, including a 43-save shutout over the Spokane Chiefs Tuesday at home. This is the fourth straight week the Winterhakws have appeared on the weekly Top 10 rankings.

The fourth and final team in the Top 10 rankings were the Moose Jaw Warriors, who fell from the third spot to ninth. The Warriors defeated the ICE Friday at home by a 5-2 score. In a battle of undefeated clubs Sunday in Moose Jaw, the Warriors were edged 4-3 by the Broncos. Brayden Burke leads the team with 10 points through six games.

Earning an honourable mention this week were the Kelowna Rockets. The Rockets started their week with a loss at home, but found success on the road, winning a pair of overtime games at the CN Centre in Prince George against the Cougars. Vancouver Canucks prospect Kole Lind and Calgary Flames draft pick Dillon Dube notched the game-winning goals Friday and Saturday respectively. 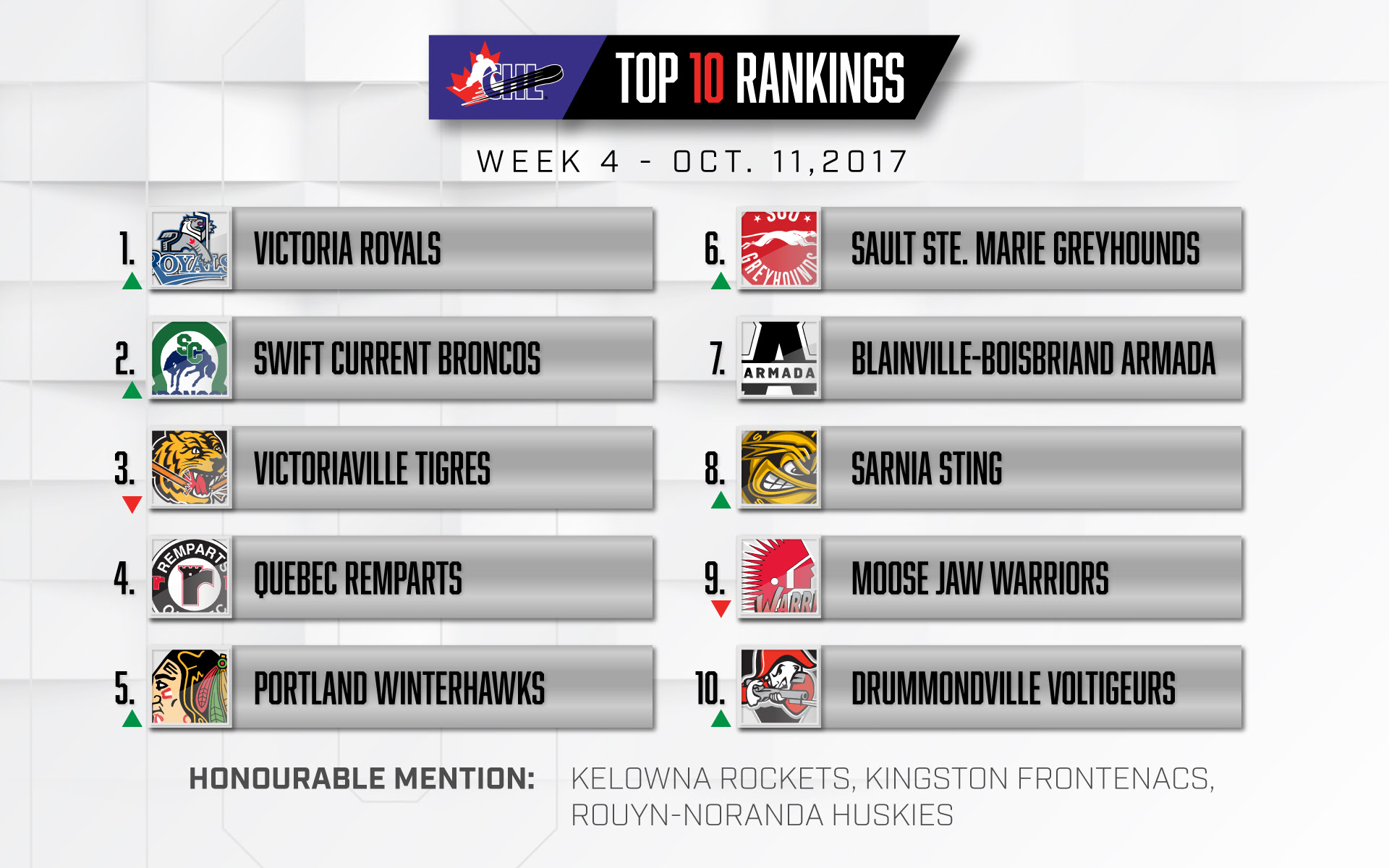