Toronto, ON – The Canadian Hockey League today announced the week five edition of the CHL Top 10 Rankings for the 2017-18 season.  The weekly rankings of the CHL’s Top 10 teams are selected by a panel of National Hockey League scouts.

The Swift Current Broncos moved up one spot in the weekly rankings to the second spot. On a two-game road trip through the Central Division this past weekend, the Broncos earned three points. Friday, Tyler Steenbergen had four goals and five points as the Broncos took down the Lethbridge Hurricanes by a 6-4 final. The following night in Cranbrook, B.C., the Broncos suffered their first road loss of the season, falling 5-4 in overtime to the Kootenay ICE. Steenbergen, a fifth-round selection of the Arizona Coyotes, has continued his torrid scoring pace into the second month of the season, with 33 points (21G-12A) through 11 games, including three four-goal games, leading the league in both goals and points. This is the third straight week the Broncos have been ranked in the CHL Top 10.

Situated two spots behind the Broncos are their early-season division rival in the Moose Jaw Warriors, who climbed five positions to the four spot. On a gruelling seven-game road trip in the second half of October, the Warriors have responded well to the challenge, with three wins. After a narrow loss to the Spokane Chiefs last Wednesday, the Warriors rattled off a 6-3 win over the Everett Silvertips, 3-1 win against the defending Ed Chynoweth Cup champion Seattle Thunderbirds and a 6-4 win over the Portland Winterhawks, the top team from last week’s CHL Top 10 Rankings. The Warriors became the second team in the WHL to reach 10 wins Tuesday, having been led by winger Brayden Burke and his 19 points (6G-13A) in 13 games. Goaltender Brody Willms has also been sharp, going 8-3-0-0 this season with a 2.46 GAA and .919 SV% with one shutout in 11 games. Defenceman Jett Woo, who is eligible for the 2018 NHL Draft, has 11 points (5G-6A) in 12 games. This is the fourth week the Warriors have counted themselves inside the CHL’s Top 10 Rankings.

The aforementioned Winterhawks ceded control of the number one spot in the CHL Weekly Rankings, but continued to be present among the league’s best by staying in the fifth spot. Portland opened their week with a 3-1 win over the Kelowna Rockets Friday, but followed it up with losses to the Rockets and Warriors to finish their week just shy of the 10-win mark. Vegas Golden Knights prospect Cody Glass and New York Islanders first-round selection Kieffer Bellows have continued to be among the league’s best the season, with 21 and 20 points respectively through 12 games each. The Winterhawks are one of just three CHL teams and the only WHL team to have appeared in the Top 10 Rankings throughout the first six weeks of the season.

Dropping four sport to ninth in the CHL Top 10 Rankings were the Victoria Royals, who earned an even split through four road games in the Prairies. Last Wednesday, the Royals earned a 3-2 overtime victory against the Edmonton Oil Kings, before dropping results to the Brandon Wheat Kings and Regina Pats. Their offence returned to normal Tuesday in a dominant 7-2 win over the Saskatoon Blades, making them the first team in the league to reach the 10-win plateau, before being joined later that night by the aforementioned Warriors. This is the fourth-straight week the Royals have featured on the Top 10 Rankings.

Earning an honourable mention were the Brandon Wheat Kings, who downed the Vancouver Giants and Royals at home while also taking a road loss at the hands of the 2018 Mastercard Memorial Cup host Regina Pats. Colorado Avalanche prospect Ty Lewis has had himself an incredible start to the season with 30 points (8G-22A) in 13 games while Los Angeles Kings defensive prospect Kale Clague leads all WHL defencemen with 10 goals and 24 points in just 11 contests. 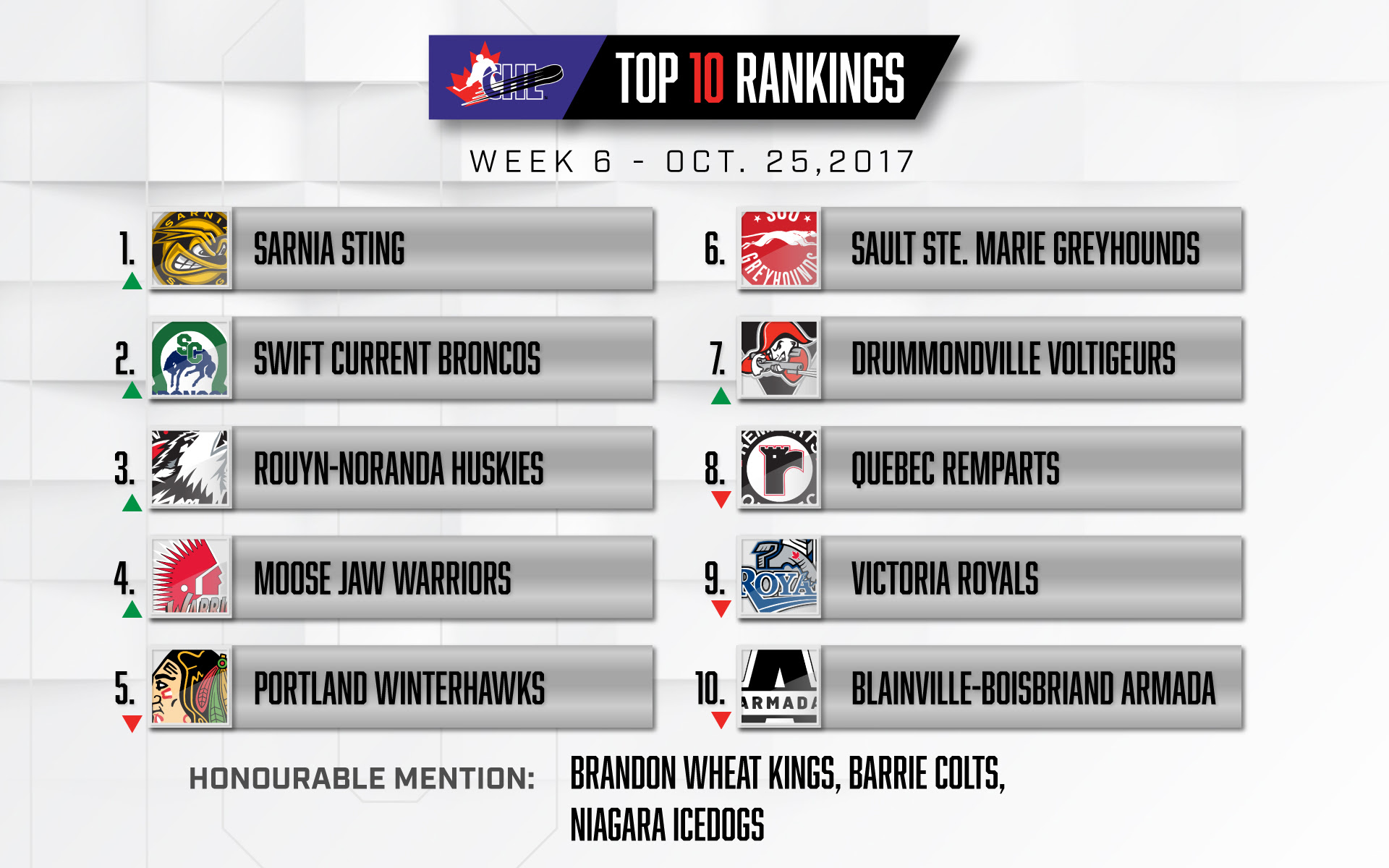