The Canadian Hockey League today announced the week eight edition of the CHL Top-10 Rankings for the 2017-18 season.  The weekly rankings of the CHL’s Top-10 teams are selected by a panel of National Hockey League scouts.

Five WHL teams occupied spots in this week’s rankings, including the Swift Current Broncos, who maintained their spot in second for a second-straight week after splitting their two weekend games. Friday, the Broncos dropped a 5-1 decision to the Prince Albert Raiders on the road before responding with a 4-2 win over the Red Deer Rebels Saturday at home. Friday’s loss saw WHL leading scorer Tyler Steenbergen end his point streak at an impressive 13 games, though he returned to form Saturday, notching a pair of goals and an assist. In seven home games, he’s recorded 13 points (7G-6A), compared to the 25 points (16G-9A) he has in eight road contests. After participating in the 2017 CIBC Canada Russia Series, Steenbergen and defenceman Colby Sissons will resume play with the Broncos on the road against the Saskatoon Blades Friday, November 10 (7:05 MST). This is the fifth-straight week the Broncos have been featured in the CHL Top 10 Rankings.

Also holding steady in their same spot as last week were the Moose Jaw Warriors, who have the lead for the moment in an East Division that is shaping up to be one of the best in the league. In two games against the Raiders this week, the Warriors won a 5-2 result at home Thursday before earning a 3-2 victory Saturday. Brayden Burke had a pair of goals and five points over the two games while Jayden Halbgewachs netted three goals, including the game-winner Saturday, giving Moose Jaw a come-from-behind victory at the Art Hauser Centre. With a 13-4-0-0 record, the Warriors continued to maintain a strong presence in the weekly rankings for a sixth-straight week. After hosting the first game of the CIBC Canada Russia Series, the Warriors and Regina Pats will begin a home-and-home series at the Brandt Centre Friday, November 10 in WHL on Access action (7:00 p.m. CST).

The Portland Winterhawks won all three of their games this week and had the biggest rise in the standings, moving up three spots to ninth in their eighth-straight week on the CHL Top 10. Portland downed the Prince George Cougars 2-1 Wednesday, defeated the Spokane Chiefs 4-1 on the road Friday and tallied a 3-1 win over the Everett Silvertips Saturday to complete a sweep of U.S. Division opponents. While the team’s offence continued to be strong, it was the team’s goaltending that was their strongest asset this week. Cole Kehler won all three games for the Winterhawks, saving 120 of the 123 shots sent his way. That effort earned Kehler both the WHL Goaltender of the Week and Vaughn CHL Goaltender of the Week honours. The Winterhawks are back in action Saturday, November 11 (6:00 p.m. PST) when they host the Tri-City Americans.

Right behind the Winterhawks were the Victoria Royals, who maintained their ranking in spot seven while marking their sixth week in the rankings. The Royals kept their eight-point lead in the B.C. Division intact this past week, splitting a pair of home games against the Kelowna Rockets. Ryan Peckford has a pair of goals and an assist over the two games while Dante Hannoun added a pair of goals as well. Calgary Flames draft pick Matthew Phillips still leads the team with 35 points (15G-20A) through 19 games. That figure is good enough for sole possession of third place in league scoring. Phillips will look to add to his totals Friday, November 10 (7:05 PST) when the Royals welcome the Edmonton Oil Kings to Save-On-Foods Memorial Arena.

The fifth WHL team to appear on this week’s national rankings were the Tri-City Americans, who rose up to the 10th and final spot in the weekly rankings after previously being an honourable mention. The Americans had to play more than 60 minutes to earn both of their victories this week, downing the Kelowna Rockets 4-3 in overtime and upending the Spokane Chiefs 3-2 in the shootout, featuring an incredible goal from Juuso Valimaki that is this week’s WHL representative in the CIBC Showdown. Patrick Dea had a spectacular performance in net Saturday against the Chiefs, stopping 50 shots in regulation and overtime and five more in the shootout, which was won in the seventh round by Carson Focht. The Americans will have a chance at taking over sole possession of first place in the U.S. Division Friday, November 10 (7:35 p.m. PST) when they travel to face the Seattle Thunderbirds. 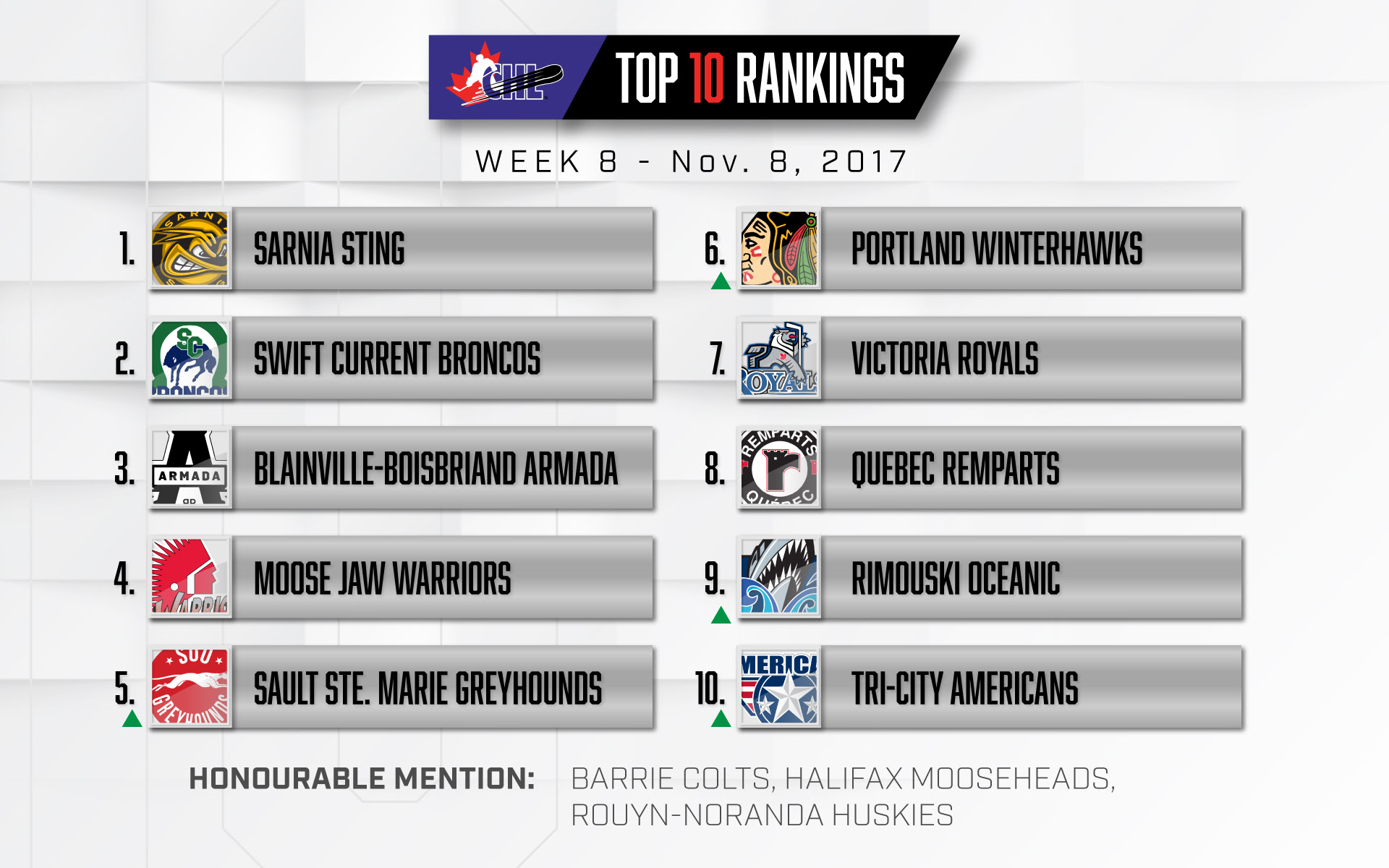