In a rematch of this year’s OUA final, the York Lions won 2-1 in penalty kicks to finish in fifth place at the 2017 U SPORTS Respect Group Men’s Soccer Championship.

The Lions opened the scoring 36 minutes in, as Cristian Cavallini broke in at just above the box. Carleton keeper Nick Jeffs got his hand on it deflecting it away but the ball wound up on the foot of Dylan Carreiro, who made no mistake for the only goal of the first half.

The Lions held the one-goal lead until the 88th minute when Gabriel Bitar was able to solve the mystery of York keeper Andrew D’Spuza, capitalizing on a cross from Emad Houache. 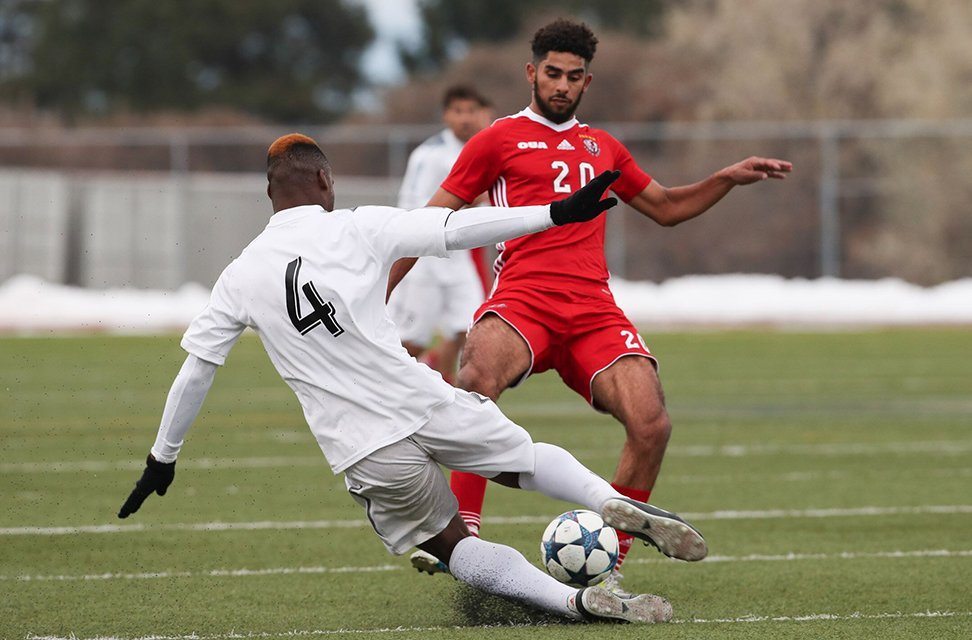 With no extra time in the consolation final, the teams went directly to penalty kicks. York outscored Carleton 4-3, with Sergiu Anton scoring the winning goal going straight at Jeffs.

“Both clubs both wanted to play good football and end up on a good note,” said Loney. “York is always a strong side. I am happy with the way we performed.”

“The last two games were good. It took a lot (to come back) after how we lost on Thursday,” added York head coach Carmine Isaaco. “I am happy with how the guys played. We used all our players and they had the opportunity to show themselves.”

The tournament will wrap up on Sunday. The bronze medal match will see an all-Canada West affair with the host Thompson Rivers WolfPack facing the UBC Thunderbirds at 2 p.m. ET/.11 a.m, PT 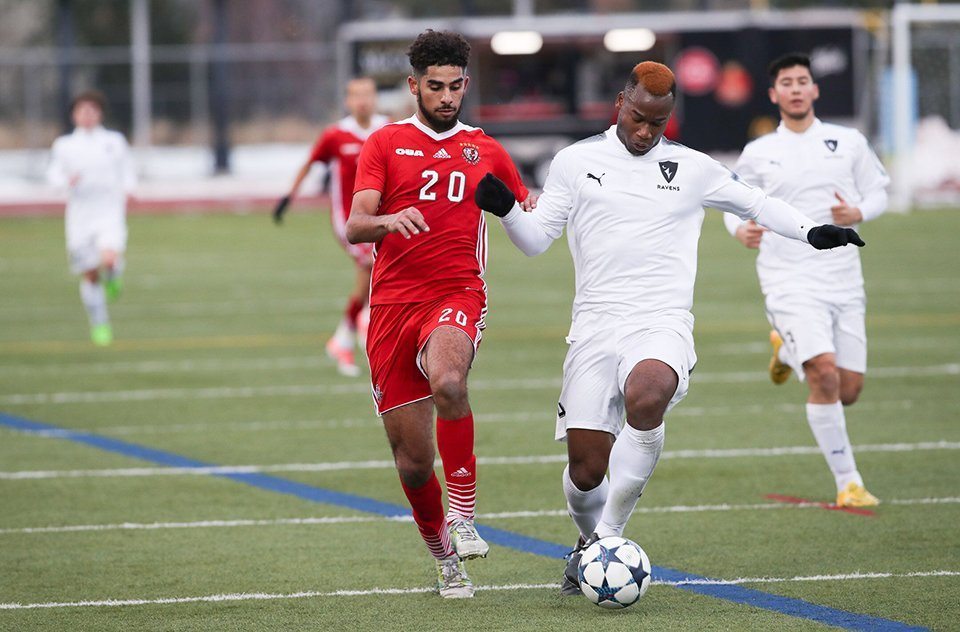 Players of the Game:

The Cape Breton Capers’ dream season continues as the No.1-ranked team in the nation will play for the 2017 U SPORTS Respect Group Men’s Soccer Championship. The Capers needed a pair of goals in overtime to beat the host Thompson Rivers WolfPack 4-2.

With over 1,000 fans packed into Hillside Stadium, the top-ranked Capers silenced the crowd early. Just over a minute in, U SPORTS Second Team All-Canadian Cory Bent took advantage of a miscue by WolfPack defender Josh Banton, stealing the ball and blasting it low left side by TRU keeper Allan Connor.

The WolfPack would respond in the 11th minute, when Banton took a ball down in front of the Capers net. In a scramble, the ball wound up on the foot of two-time U SPORTS Academic All-Canadian Ryan Glanville. The 33-year-old native of Williams Lake, B.C., made no mistake, finding open net on the left side on Cape Breton’s Ben Jackson.

That first goal was scored on a set piece and TRU took the lead in the 20th minute on a similar play. Canada West Player of the Year and U SPORTS First Team All-Canadian Mitchell Popadynetz took a corner kick, which wound up on the right foot of James Fraser, who one-timed it for his fifth goal of the postseason and a 2-1 lead at the half 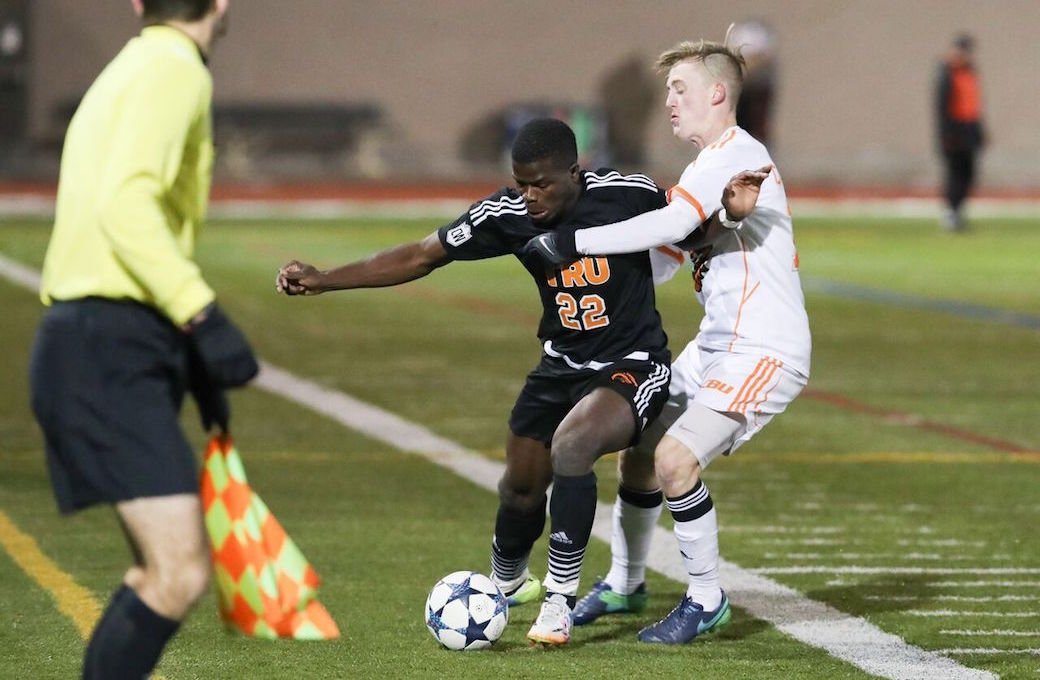 In the second half, the Capers tied it up in the 53rd minute, thanks to the speed of Caelan Budhoo who started it off with a run down the left side. When he reached the goal line, he centered it for Stuart Heath, who one-timed it past Connor.

In extra time, Cape Breton capitalized on a set piece of their own.  Four minutes into the first extra period, Budhoo took a corner kick and it was converted by Health for his second of the match.

Then, in the 12th minute of the first OT, Charlie Waters converted on a free kick – his third marker of the national tournament – eluding Connor as Waters beat the TRU keeper on the lower right side.

That was just fantastic. Just loved the passion of the crowd, the energy and the commitment of all the players. We got the early goal and then they got one back and the fans were pumped up. It was great to experience. I think the TRU players fed off that and put two goals in.

“The guys really battled today,” stated TRU head coach John Antulov. “They showed resilience. Even when we went down 4-2 in the second overtime we had four or five great scoring opportunities. They didn’t quit. They kept on fighting. “

Despite the loss, both coaches felt TRU’s showing has put the program on the national map.

I look at the last two weeks, we have beaten the last three national champions. We took the No.1 team to double overtime. I thought we gave them a very good game. They are a very, very good side. There is no question about that. We gave them a real solid battle and fought right till the end.

“(There is) so much for the athletic director, the coach, the players and the community to look forward to here,” Morley said of the WolfPack’s development. “They knocked York out last night, they took the No.1 team in the country to double overtime. Holy smokes, if this is just the beginning, they are going places.” 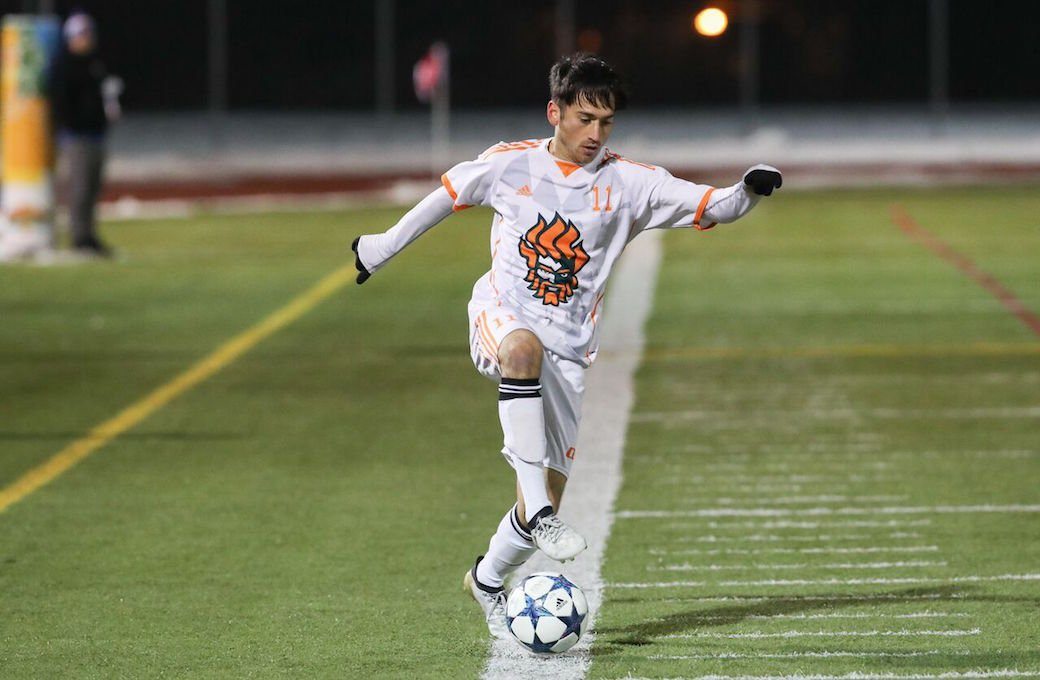 The Capers will meet the Montreal Carabins in Sunday’s gold medal game at 5 p.m. ET/2 p.m. PT.  The bronze medal match will feature a Canada West battle between the conference champion UBC Thunderbirds and the WolfPack at 2 p.m. ET/11 a.m. PT.  The teams last met in the Canada West semifinal, with UBC winning 3-1.

The consolation final will see the two Ontario teams – York and Carleton – facing off on Remembrance Day at 4:30 p.m. ET/1:30 pm PT

Players of the game: