The Canadian Hockey League today announced the week nine edition of the CHL Top-10 Rankings for the 2017-18 season.  The weekly rankings of the CHL’s Top-10 teams are selected by a panel of National Hockey League scouts.

For the second time this season, the Moose Jaw Warriors find themselves as the top-ranked Western Hockey League team in the CHL Weekly Top 10 Rankings. The Warriors completed a home-and-home sweep of the Regina Pats, led by WHL Goaltender of the Week Brody Willms. Tuesday, the Warriors continued to grow their lead in the East Division with a 7-4 win over the Swift Current Broncos. Forward Jayden Halbgewachs has continued to produce at a torrid rate, with nine points (6G-3A) in his last three games. This week marks the seventh-straight week in the Top 10 Rankings for the Warriors, who are on a six-game winning streak. They’ll put that streak on the line Wednesday, November 15 (7:05 p.m. CST) against the Saskatoon Blades.

The Portland Winterhawks inched up a single spot in this week’s rankings, moving into the fifth spot. The Winterhawks won 5-2 over the Tri-City Americans Saturday before a 6-1 beat down of the Prince Albert Raiders Sunday. On a team with a plethora of offensive options, San Jose Sharks prospect Joachim Blichfeld led the way this week, tallying seven points (2G-5A) in the pair of games as the Winterhawks extended their winning streak to five games and took the lead in the U.S. Division. The Winterhawks are back in action Saturday, November 18 (6:00 p.m. PST) when they play host to the Regina Pats.

Dropping in this week’s rankings were the Swift Current Broncos, who now find themselves in the sixth spot after a pair of wins and a loss in three games. Friday, the Broncos downed the Blades by a 6-4 score before shutting out the Lethbridge Hurricanes by a 6-0 final Saturday. Tuesday, the Broncos lost a tough matchup to the Warriors by a 7-4 score. CHL Player of the Week and Florida Panthers prospect Aleksi Heponiemi as well as teammate and Arizona Coyotes prospect Tyler Steenbergen have led the WHL with 11 points each over their last three games. Steenbergen had five goals and six assists while Heponiemi has three goals and eight helpers. This week marks the sixth-straight week on the Top 10 Rankings for the Broncos. The Broncos are back in action Friday, November 17 (7:30 p.m. MST) when they travel west to face the Medicine Hat Tigers.

The fourth and final WHL team in this week’s CHL Top 10 Rankings are the first club from the Central Division to earn that honour this season, with the division-leading Medicine Hat Tigers finding their way into the 10th spot. In the 3,800th game of Bob Ridley’s broadcasting career Friday, the Tigers won a 4-2 result on the road against the Calgary Hitmen. They completed the home-and-home sweep a day later at the Canalta Centre, downing the Hitmen 4-3 in overtime. Tuesday, they dispatched of the Kootenay ICE by a 4-1 final. Captain Mark Rassell has been on an offensive tear, with eight points (6G-2A) in those three games, including a hat trick Tuesday against the ICE, giving him two straight game-winning goals for his club. The Tigers host the aforementioned Broncos Friday, November 17 (7:30 p.m. MST) at the Canalta Centre.

Earning an honourable mention this week were the Tri-City Americans, who split their weekend games. Friday, they shutout the Seattle Thunderbirds by a 4-0 score before losing 5-2 to the Winterhawks Saturday. 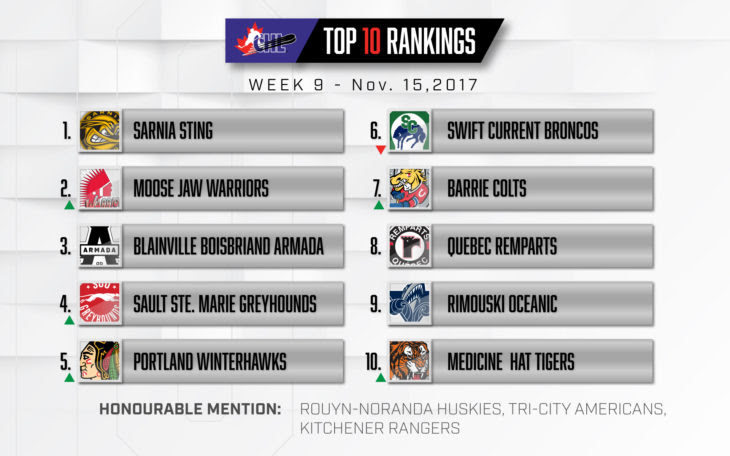