The Canadian Hockey League today announced the week 10 edition of the CHL Top-10 Rankings for the 2017-18 season. The weekly rankings of the CHL’s Top-10 teams are selected by a panel of National Hockey League scouts.

The Moose Jaw Warriors once again held onto the distinction of the top-ranked Western Hockey League club, winning three of their four games this past week. A 5-4 loss to the Saskatoon Blades last Wednesday was a shock to the team, but the ship was quickly righted with a 5-2 win over the Calgary Hitmen Friday, followed by a 6-3 win over the Blades and a 7-6 overtime victory against the Blades Tuesday. WHL On the Run Player of the Week Jayden Halbgewachs and teammate Brayden Burke have formed their own offensively-gifted partnership in the competitive East Division. Halbgewachs has been on a goal-scoring tear, lighting the lamp in nine of his last 10 games and recording 24 points (15G-9A) in that span. Not to be outdone, Burke has points in 12 of his last 14 contests, tallying 30 points (6G-24A) over that time period. This week marks the eighth-straight week the Warriors have remained in the CHL Top 10 Rankings. The Warriors will continue a seven-game home stand Saturday, November 25 (7:00 p.m. CST) when they host the Prince Albert Raiders.

Moving up one spot this week were the U.S. Division-leading Portland Winterhawks, who marked their 10th-straight week in the CHL rankings. The Winterhawks won both their games over the last seven days, downing the 2018 Mastercard Memorial Cup host Regina Pats Saturday at home by a 3-1 final before taking care of business against the Kootenay ICE Tuesday in a 5-2 victory. Goaltender Cole Kehler continued to dazzle and be one of the best players on his team, stopping 64 of the 67 shots in those two games. Tuesday also marked Kehler’s 50th career WHL victory. The Winterhawks are getting things done with their offence as well. Cody Glass (Vegas Golden Knights) and Skyler McKenzie (Winnipeg Jets) have each tallied five points over their last two games, with McKenzie tallying three goals and Glass adding four assists in that span. Currently on a six-game road trip against the Central Division, the Winterhawks will take on the Calgary Hitmen Wednesday, November 22 (7:00 p.m. MST).

Remaining in the CHL Top 10 Rankings for a seventh-straight week, the Swift Current Broncos held steady, holding down spot six in the rankings once again. The Broncos did well on a tough weekend stretch, edging the Medicine Hat Tigers 4-3 on the road Friday and defeating the Hitmen 2-1 in a shootout at home Saturday before falling Sunday afternoon to the Brandon Wheat Kings by a 7-3 final. Aleksi Heponiemi (Florida Panthers) led the Broncos with six points (3G-3A) over those three games while Tyler Steenbergen (Arizona Coyotes) picked up another four points (3G-1A), surpassing the 30-goal plateau in just his 19th game of the season. The Broncos will host the Blades Wednesday, November 22 (7:00 p.m. CST) in the fifth meeting of the season between the two clubs.

Making their debut on the Top 10 Rankings this week were the Brandon Wheat Kings, who climbed into the 10 spot. The Wheat Kings made quick work of their opponents in both contests, downing the Blades 4-1 last Friday on the road before defeating the aforementioned Broncos by a 7-3 score Sunday. Four different Wheat Kings tallied four points over the two games, led by three goals from Stelio Mattheos (Carolina Hurricanes). Goaltender Logan Thompson also performed well, stopping 70 of the 74 shots sent his way as he helped the Wheat Kings improve to 7-3 in their last 10 games. The Wheat Kings will be hoping for a repeat of their previous weekend as they take on the Blades Friday, November 22 (7:05 p.m. CST) before another road date Saturday, November 25 (7:00 p.m. CST) against the Broncos.

Earning an honourable mention this week were the Medicine Hat Tigers, who split their two games over the week. Friday, the Tigers lost at home to the Broncos by a 4-3 final before using a six-goal third period to oust the Prince George Cougars Tuesday on the road by a 7-4 score. The Tigers and Cougars will wrap up a mid-week two-game set Wednesday, November 22 (7:00 p.m. PST) in northern British Columbia. 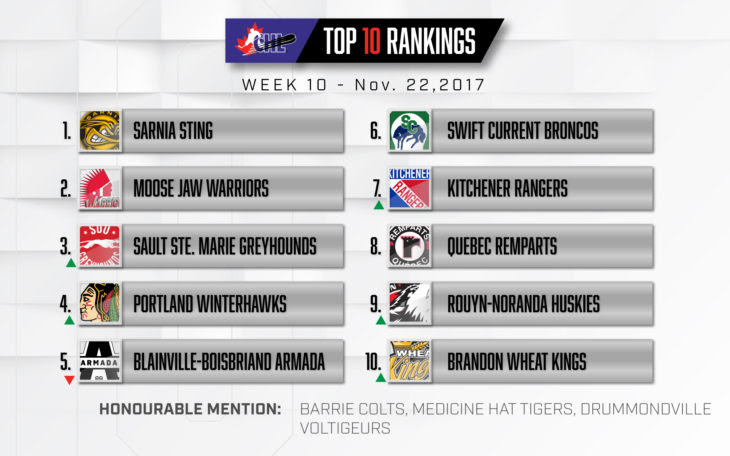