The Canadian Hockey League today announced the week 11 edition of the CHL Top-10 Rankings for the 2017-18 season.  The weekly rankings of the CHL’s Top-10 teams are selected by a panel of National Hockey League scouts.

On the strength of a 10-0-0-1 run in their last 11 games, the U.S. Division-leading Portland Winterhawks laid claim to the second spot in this week’s rankings. Undefeated in their last 11 games, the Winterhawks collected three victories and seven of a possible eight points in four games on the road. Last Wednesday, they defeated the Calgary Hitmen by a 7-3 final, topped the Red Deer Rebels by a 6-2 score Friday and shutout the Edmonton Oil Kings by a 3-0 score Saturday. Tuesday, they suffered their first defeat since Oct. 29, but still managed to get a point in a 4-3 shootout loss to the Lethbridge Hurricanes. The Winterhawks have been led this season by the reigning CHL Player of the Week and Vegas Golden Knights prospect Cody Glass, who sits sixth in WHL scoring with 45 points (17G-28A) in 24 games, including an active 11-game point streak. The Winterhawks are spending their 11th straight week in the CHL Top 10 Rankings.

Goaltender Cole Kehler has also pulled his share of the load for the Winterhawks, sporting a 9-0-0-1 record, 1.49 goals against average and .955 SV%  in the month of November. The Winterhawks will wrap up their six-game road trip against the Medicine Hat Tigers on Wednesday, November 29 (7:00 p.m. MST).

Dropping two spots to the four spot this week were the Moose Jaw Warriors. The Warriors played just two games, losing a 3-2 shootout result to the Prince Albert Raiders before winning a 7-4 battle against the Victoria Royals at home Tuesday in a battle of division leaders. Jayden Halbgewachs each wrapped up productive months with four points (3G-1A) each over the two games, helping the Warriors become the first team in the WHL to reach 20 wins.

Halbgewachs has been on a huge offensive streak on an active 12-game point streak with 28 points (18G-10A) in that time span. Up next for the Warriors is a tough contest on Friday, December 1 (7:00 p.m. CST) as they wrap up a seven-game home stand against their Trans-Canada rival Swift Current Broncos. This week marked the Warriors’ ninth straight week in the CHL Top 10 Rankings.

The Broncos held firm in sixth place in the CHL Top 10 for another week. The Broncos disposed of the Saskatoon Blades (5-4) and Prince Albert Raiders (3-2) in shootouts on Wednesday and Friday respectively before dropping a 3-2 decision in overtime to the Brandon Wheat Kings. WHL leading scorer and Florida Panthers prospect Aleksi Heponiemi continued his offensive success with six points (1G-5A) in the three games. Broncos’ captain and Calgary Flames prospect Glenn Gawdin added four points (4G) as well, including a two-goal effort against the Raiders where he scored the winning goal in the shootout as well. The Broncos will face a big test to close out November, playing host to the Victoria Royals on Wednesday, November 29 (7:00 p.m. CST) at home. The ranking marked the eighth straight week the Broncos have appeared on the CHL Top 10 Rankings.

The fourth and final WHL team to earn a spot in this week’s rankings were the Brandon Wheat Kings, who maintained their 10th place ranking from last week. After losing a 6-5 result to the Saskatoon Blades, the Wheat Kings responded with a 3-2 overtime win in Swift Current Saturday followed by an incredible 6-5 comeback overtime victory Tuesday in Red Deer. Down 5-1 entering the third period, the Wheat Kings reeled off five straight goals, including a pair from Carolina Hurricanes prospect Stelio Mattheos to tie up the game and then win it in overtime. Colorado Avalanche prospect Ty Lewis led the Wheat Kings this week with seven points (2G-5A) in the three games. Up next for the Broncos is another road date in Alberta’s capital as they take on the Edmonton Oil Kings on Wednesday, November 29 (7:00 p.m. MST). This is the Wheat Kings’ second week in the CHL Top 10 Rankings.

Earning an honourable mention this week were the B.C. Division-leading Victoria Royals. The Royals won a pair of weekend games against the Seattle Thunderbirds at home before dropping Tuesday’s result to the Warriors. 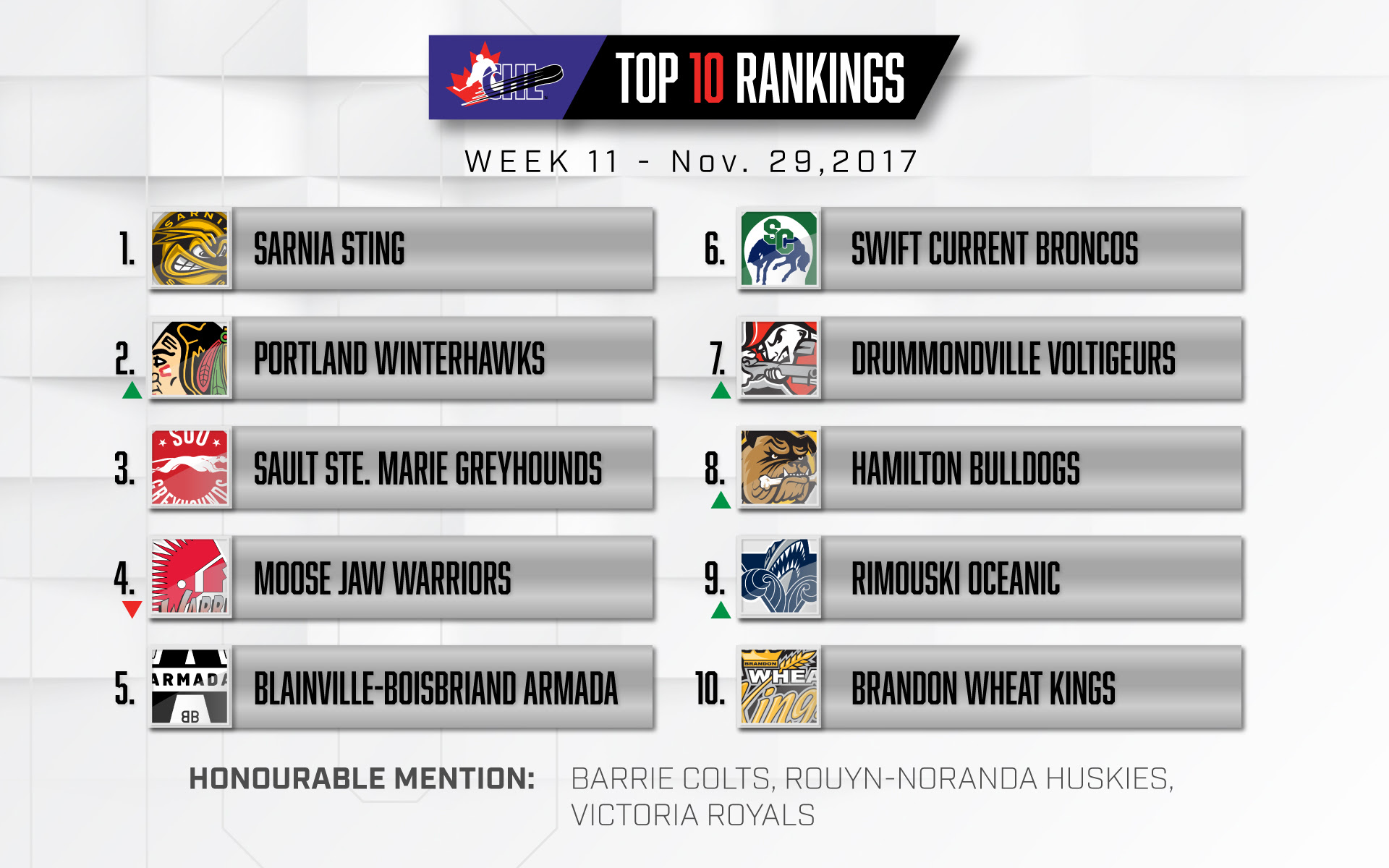