Toronto, ON – The Canadian Hockey League today announced the week 15 edition of the CHL Top-10 Rankings for the 2017-18 season.  The weekly rankings of the CHL’s Top-10 teams are selected by a panel of National Hockey League scouts.

The Moose Jaw Warriors rang in 2018 by remaining the second-best team in the Canadian Hockey League, holding down the second spot in the rankings for another week after going 3-0-0-1 in four games against divisional rivals. After dropping a 5-4 shootout loss to the Swift Current Broncos last Wednesday, the Warriors answered back with an 8-2 win over Swift Current Thursday, a 7-4 victory over the Brandon Wheat Kings during Sportsnet’s Saturday Showcase and a 6-2 win over the Wheat Kings Sunday to close out 2017. WHL Player of the Month Brayden Burke and WHL goals leader Jayden Halbgewachs, who recently signed an entry-level contract with the San Jose Sharks, sit first and third respectively in the WHL scoring race. The two have combined for 148 points (59G-89A) in the team’s first 39 games.

This week marks the 13th straight week the Warriors have found themselves in the CHL Top 10 Rankings. Up next for the Warriors is a three-game road trip starting Wednesday, January 3 (7:00 p.m. MST) against the Red Deer Rebels.

Slotting into the fourth spot in the CHL Top Rankings for another week were the Broncos, who won a critical game against the Warriors this past week in the battle for the division. The Broncos dropped a rematch to the Warriors Thursday and lost both sides of a home-and-home set to the Saskatoon Blades as well, but remain in the fight for the Eastern Conference crown. Just nine points back of the Warriors for the division lead, Speedy Creek remain the second-best team in the WHL and should be aided as early as this coming week as both Aleksi Heponiemi (Florida Panthers) and Tyler Steenbergen (Arizona Coyotes) return to the lineup after representing their respective countries at the 2018 IIHF World Junior Championship.

The Broncos marked their 12th straight week on the CHL Top 10 Rankings this week and will take to home ice Wednesday, January 3 (7:00 p.m. CST) to battle the visiting Kootenay ICE.

Rounding out the top five teams this week in the CHL were the Brandon Wheat Kings, who split a home-and-home with the 2018 Mastercard Memorial Cup host Regina Pats before dropping a pair of games to the Warriors. Stelio Mattheos (Carolina Hurricanes) is two goals shy of his first 30-goal season and is one point shy of 150 for his WHL career. The Wheat Kings have also looked to another forward for guidance in Ty Lewis (Colorado Avalanche). The 5-foot-11, 188-pound hometown product has recorded 61 points (19G-42A ) in 37 games this season. This week marked the Wheat Kings’ sixth straight week in the CHL Top 10 Rankings. They’ll hit the ice Wednesday, January 3 (7:00 p.m. CST) to battle the Pats at the Brandt Centre.

Earning an honourable mention this week were the Kelowna Rockets, who have won five games in a row, thanks in large part to goaltender James Porter, who was named the Vaughn CHL Goaltender of the Week Wednesday. In his last three games, Porter has recorded a pair of shutouts, and stopped 114 of the last 115 shots sent his way. The Rockets return to action Wednesday, January 3 (7:05 p.m. PST) when they host the Tri-City Americans at Prospera Place. 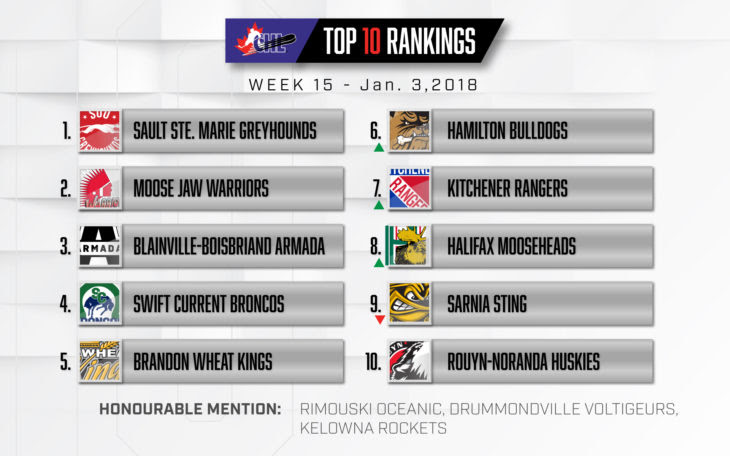