In the second game of the Battle for the Strait of Juan de Fuca,  the Victoria HarbourCats defeated the Port Angeles Lefties 6-5 behind a five run error filled sixth inning at Royal Athletic Park.

The win evens the West Coast League series between the two teams at a game each, with the rubber match scheduled to go Sunday afternoon, Father’s Day, in a 1:00 pm matinee. 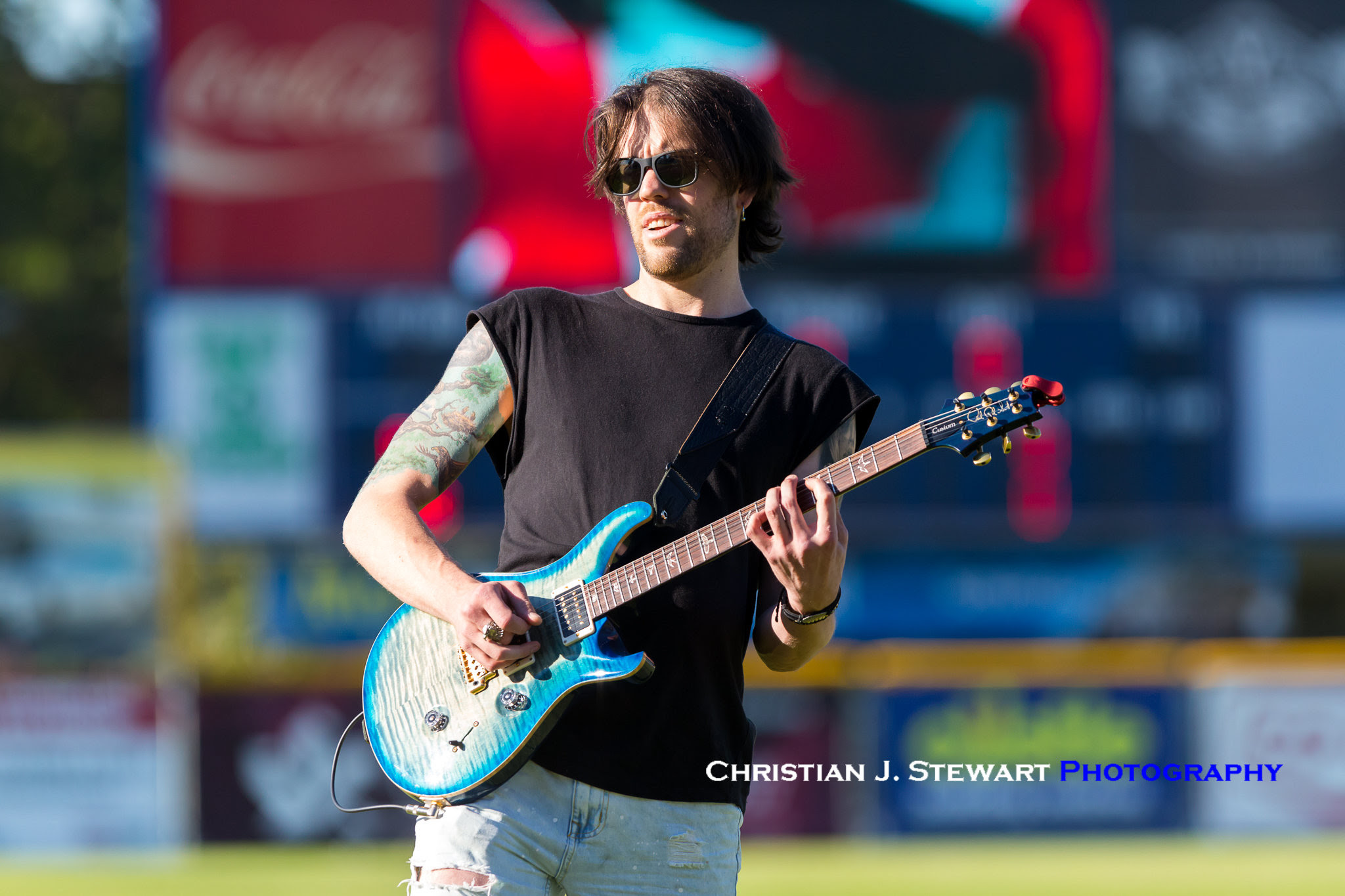 Guitar player Josh Boudreau was on hand Saturday night to play the National Anthems Jimmy Hendrix style (Photo: Christian J. Stewart)
In their eleventh game this year, the HarbourCats were joined by a duo from the University of Hawaii in the starting line-up. Returnee and fan-favoute Ethan Lopez started the game in centre field, while his teammate and new HarboutCat Dustin Demeter made his debut at shortstop.

Demeter managed to secure his first hit as a HarbourCat with a double in the fourth, while Lopez provided a steady hand patrolling centre field. 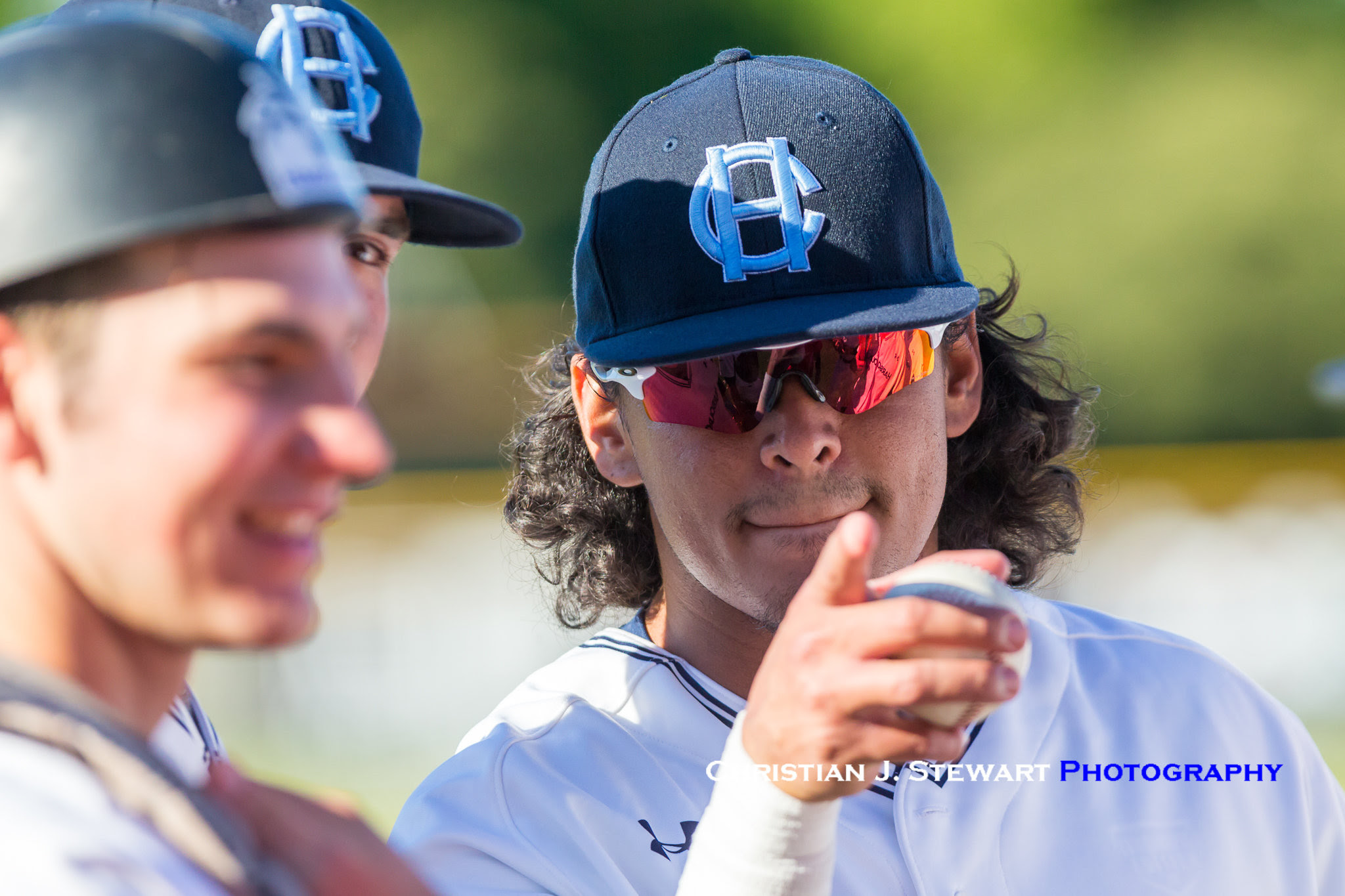 Tyler Hilton of Mesa Community College got the ball for Brian McRae’s crew, and after a 1-2-3 first inning, the righty fell victim to the Port Angeles’ bats in the top half of the second.  After recording the first out, Hilton gave up a single, and then surrendered a two-run shot over the fence to Lefties catcher Ronnie Rust, giving the visitors an early 2-0 lead.

In his first start this season, Hilton had no trouble keeping the ball in the yard going six full innings of two-hit baseball in a 6-5 HarbourCat victory over Yakima Valley on June 6th, but the Mesa, AZ native gave up three home runs tonight. 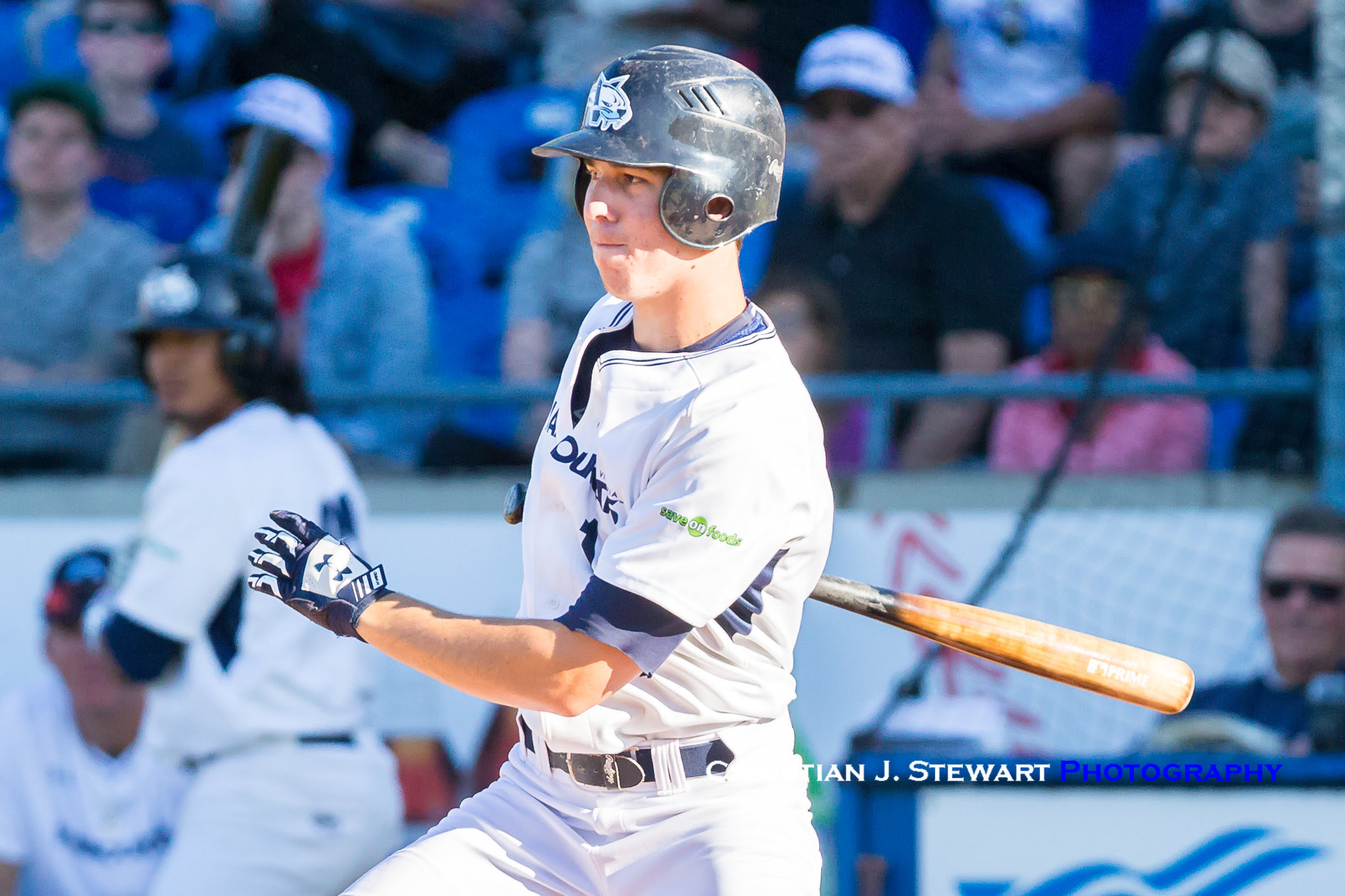 Pepperdine’s Mike Malinchak made a successful debut Saturday with a hit and an RBI (Photo: Christian J. Stewart)

With five home runs in two games this series, the Port Angeles Lefties sluggers must realize they’re hosting the 2018 West Coast League Home Run Derby and All-Star Game later this season at Civic Field in Port Angeles, as they certainly seem to be getting their practice in against the HarbourCats.

In the bottom of the third the HarbourCats bats responded as newcomer Mike Malinchak from Pepperdine University collected his first RBI of the season in his first start, with a sac-fly to slice the Lefties lead in half.  Malinchak, who’s father Bill played 10 years in the National Football League for the Detroit Lions and Washington Redskins, finished his freshman season in late-May at Pepperdine and came up to Vancouver Island after his team was defeated in the NCAA post-season. 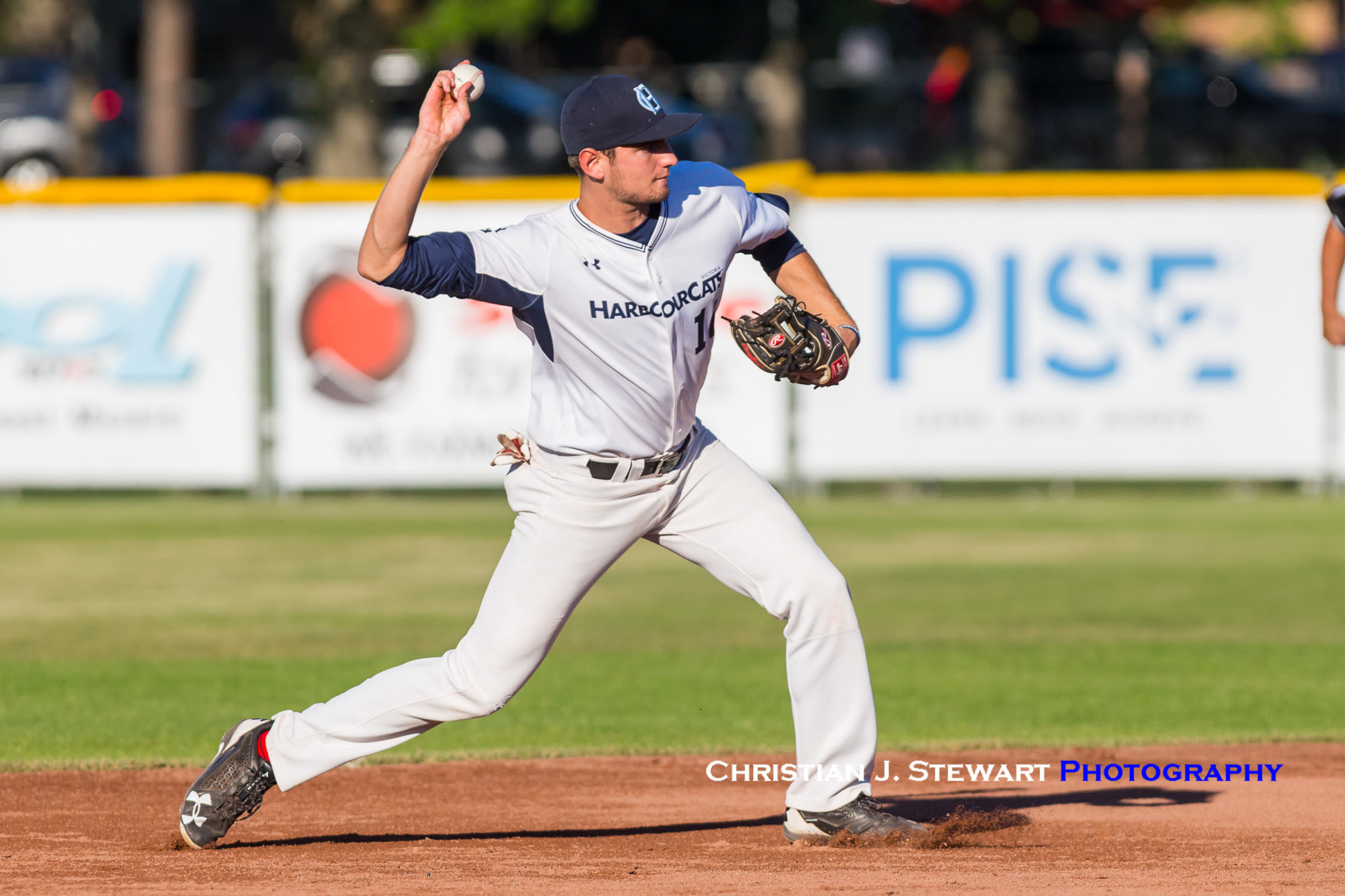 Hawaii’s Dustin Demeter debuted at short Saturday for the HarbourCats and would finish with a hit and an RBI to help pace the HarbourCats offence (Photo: Christian J. Stewart)
However, two innings later in the visitors half of the fourth, the Lefties’ bats came alive once again. Kyle Schimpf started the inning with a solo homer to left centre, and after a single, Austin Earl smacked a two-run home run to increase the Lefties lead to 5-1.

Garrett Westberg, in his third start of the season for Port Angeles, would hold the HarbourCats to only four hits with three strikeouts and no walks. The Central Florida University product pitched the exact same amount of innings tonight (five) as he did in his first two starts combined.

The fortunes started to turn for the home team once first baseman Jack Smith started the pivotal sixth inning with a RBI triple, his fourth RBI of the season, and Demeter scored him one batter later, with his first RBI as a ‘Cat  to make the score 5-3. 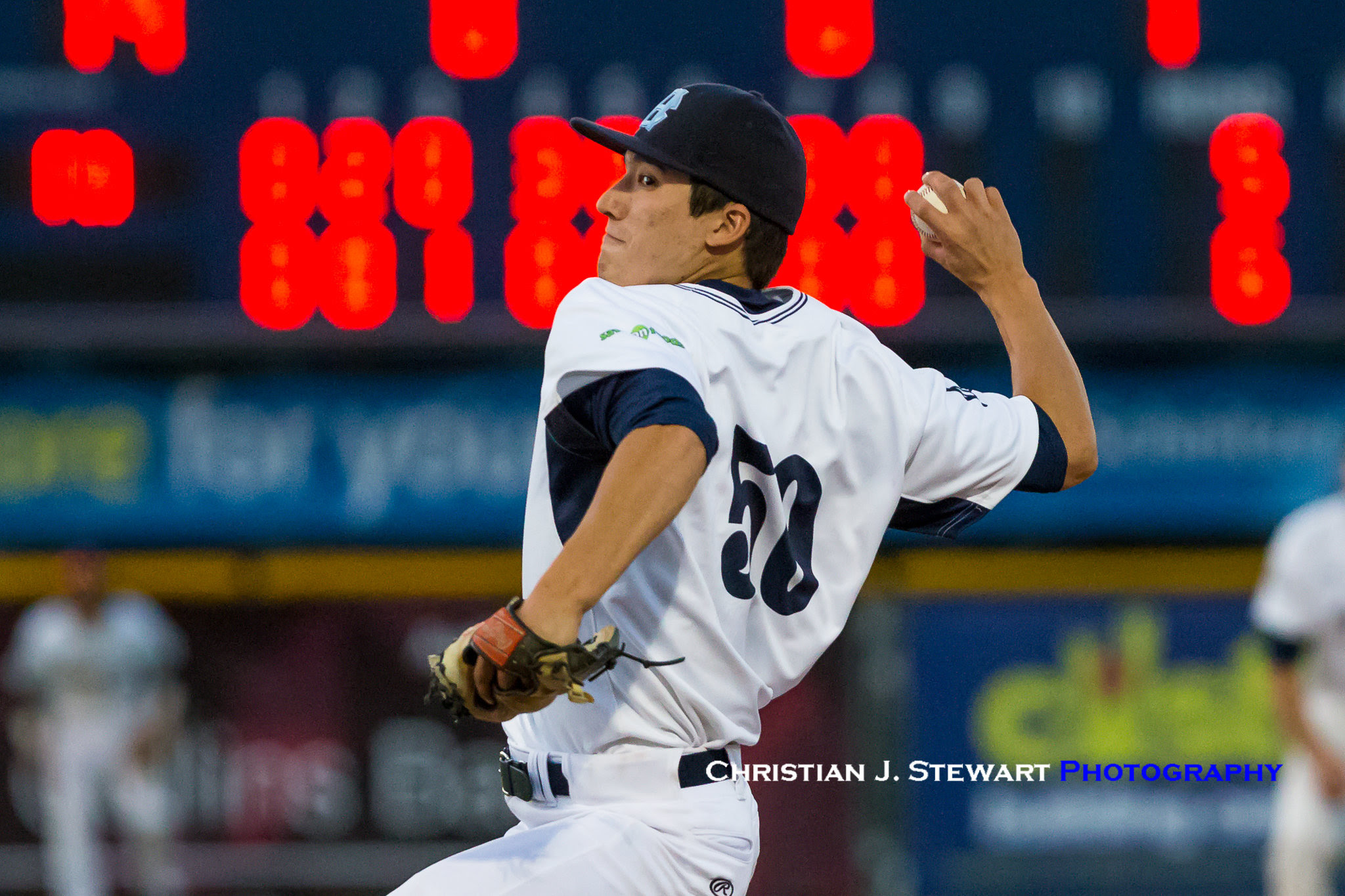 Victoria’s Tyler Yoshihara has been light’s out for the the HarbourCats this season and he spun another shut-out inning Saturday to help the HarbourCats hang on to their 6-5 win (Photo: Christian J. Stewart)
Later in the inning catcher Hayden Jaco scored off a wild pitch from new Lefties pitcher Joshua Thompson, and Harrison Spohn crossed home plate after an error at first-base to even the score at 5-5.

Port Angeles would commit their second error of the inning, and allow the HarbourCats to take their first lead of the series after Trey Bigford scored from an overthrow at first base by the Lefties second baseman.

Closer Tyler Yoshihara was summoned out of the ‘Pen for the HarbourCats and the righty from Pomona-Pitzer didn’t disappoint, racking up two strikeouts in his one inning worked to preserve the HarboutCat victory.