A pair of Oregon State Beavers propelled the Victoria HarbourCats to a series victory and 15-6 win over the five-time WCL league champion Corvallis Knights Friday night at Royal Athletic Park. 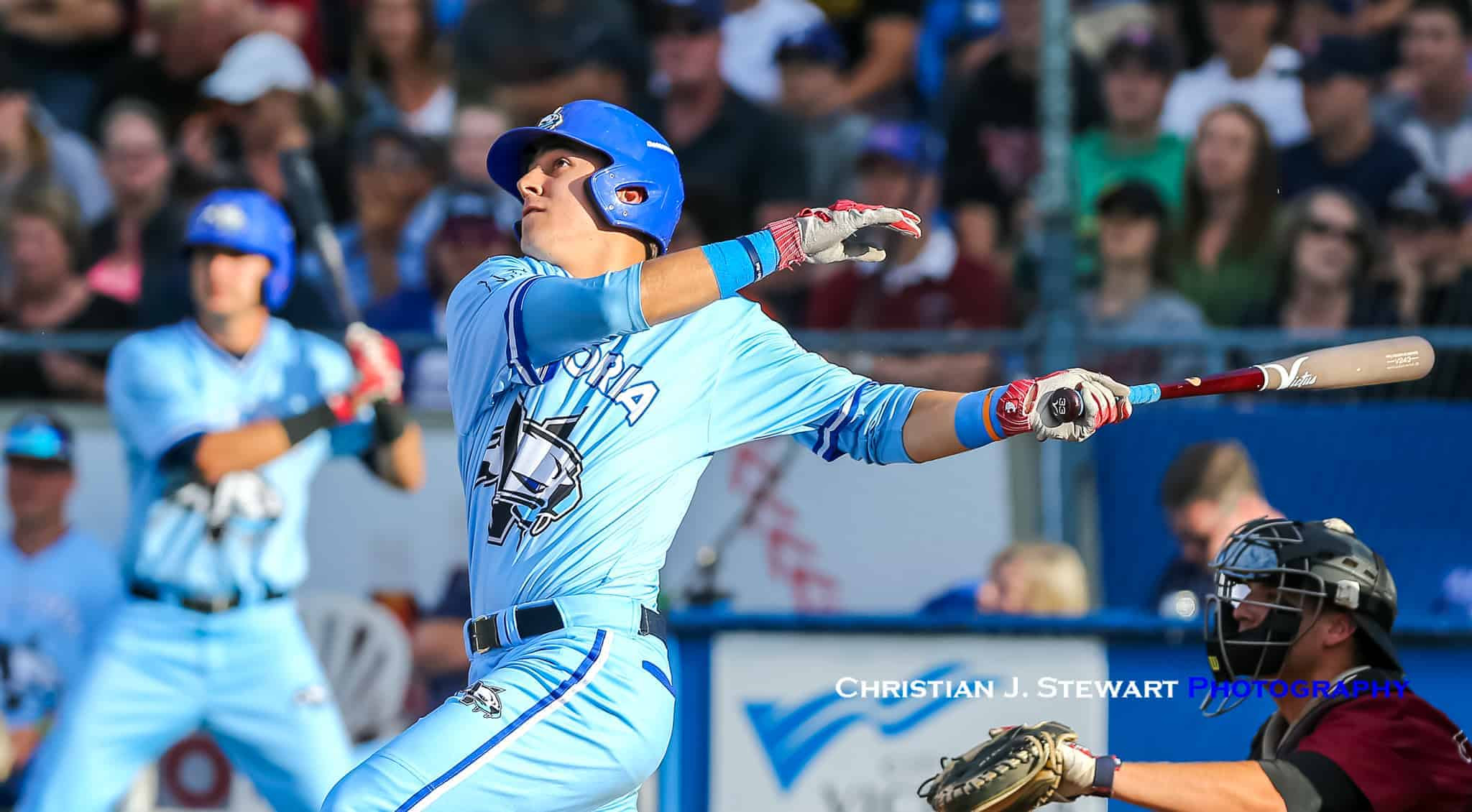 Ryan Ober is catching fire at the right time for Victoria, Friday hitting his third homer in two games, this time a three-run shot that was the highlight of the HarbourCats six-run fourth inning (Photo: Christian J. Stewart)

Ryan Ober and Joe Casey, both members of the Oregon State NCAA College World Series winning team in June, combined for five RBI’s, as Victoria earned their second straight victory over the Knights.

After dropping five consecutive games to Corvallis dating back to last year’s WCL Finals, Victoria snapped the skid yesterday with a 11-5 win and used a six run fourth inning Friday to pull ahead for good in front of a near record crowd of 5,165 on the third Fireworks night of the season. 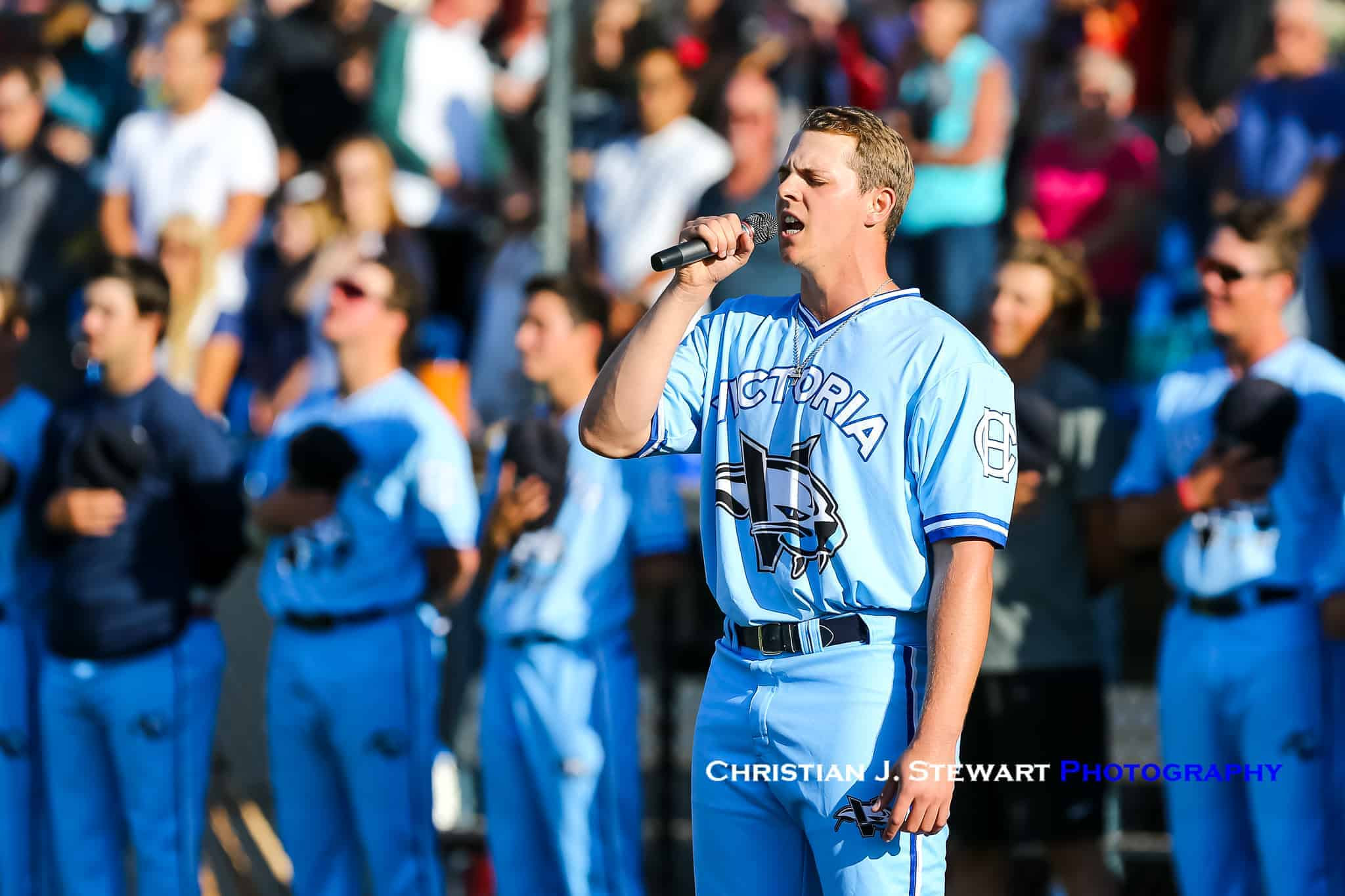 Victoria’s Hunter Vansau got the game started Friday by singing the US National Anthem in front of a crowd of 5,165 fans (Photo: Christian J. Stewart)

The HarbourCat’s bats would provide an early fireworks show preview in the home half of the first, as Mike Malinchak got the scoring started with an RBI sac-fly to score Casey who advanced earlier with a hit by pitch.

Landon Anderson got the start on the mound, and looking for his first victory of the season, the righty out of Cal State Fullerton was locked into a nice groove until the third inning. 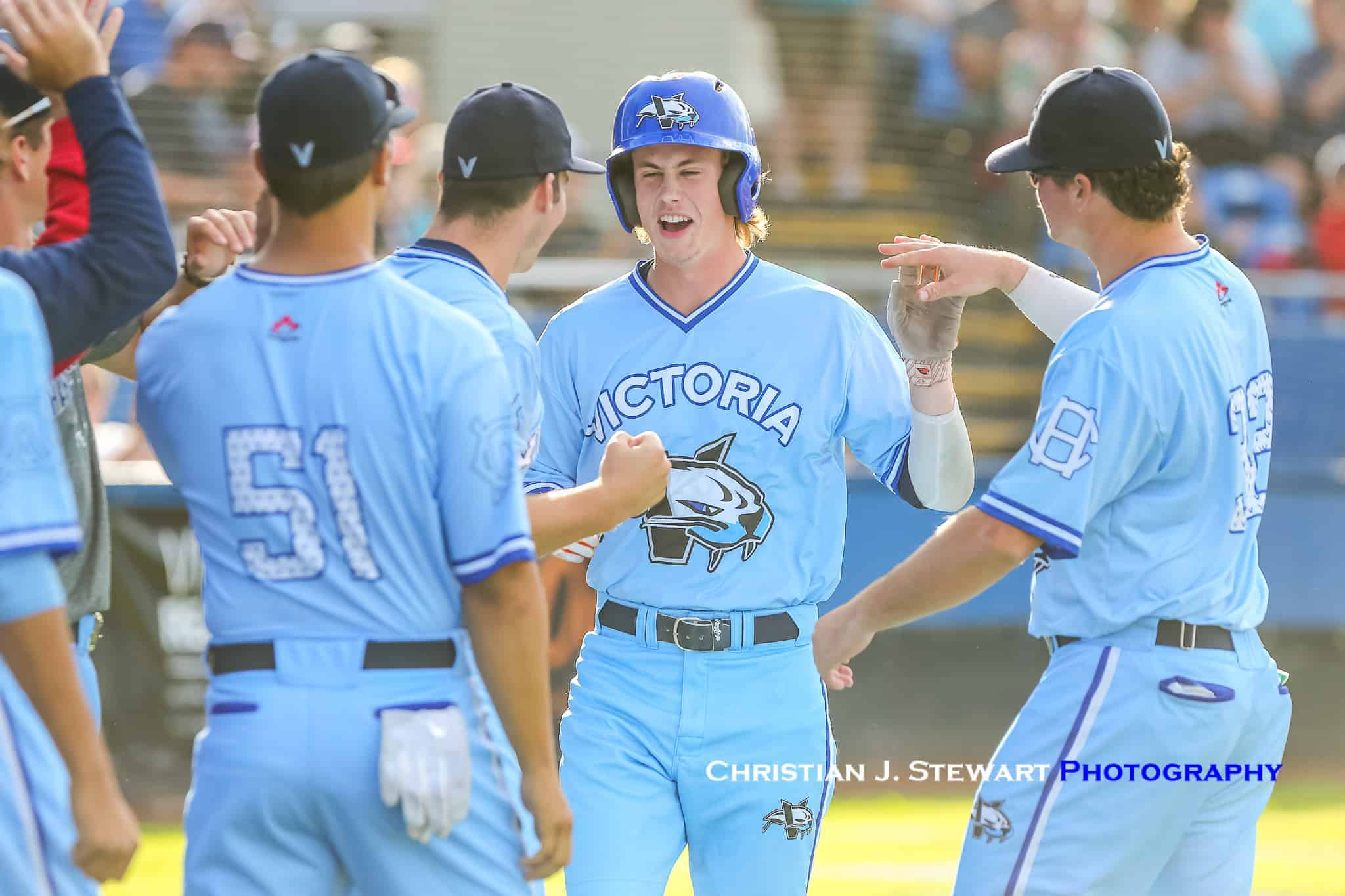 Anderson retired the first seven Corvallis batters of the game, but Beau Philip got the first Knights hit on the board with a one-out single. Despite getting the next batter to fly out, Anderson yielded back to back hits to give Corvallis a 2-1 advantage.

The Knights doubled their lead in the fourth, behind a pair of RBI singles from Trace Tammaro and Philip, however Victoria showed resilience by putting a six-spot on the scoreboard immediately after in the home half of the inning. 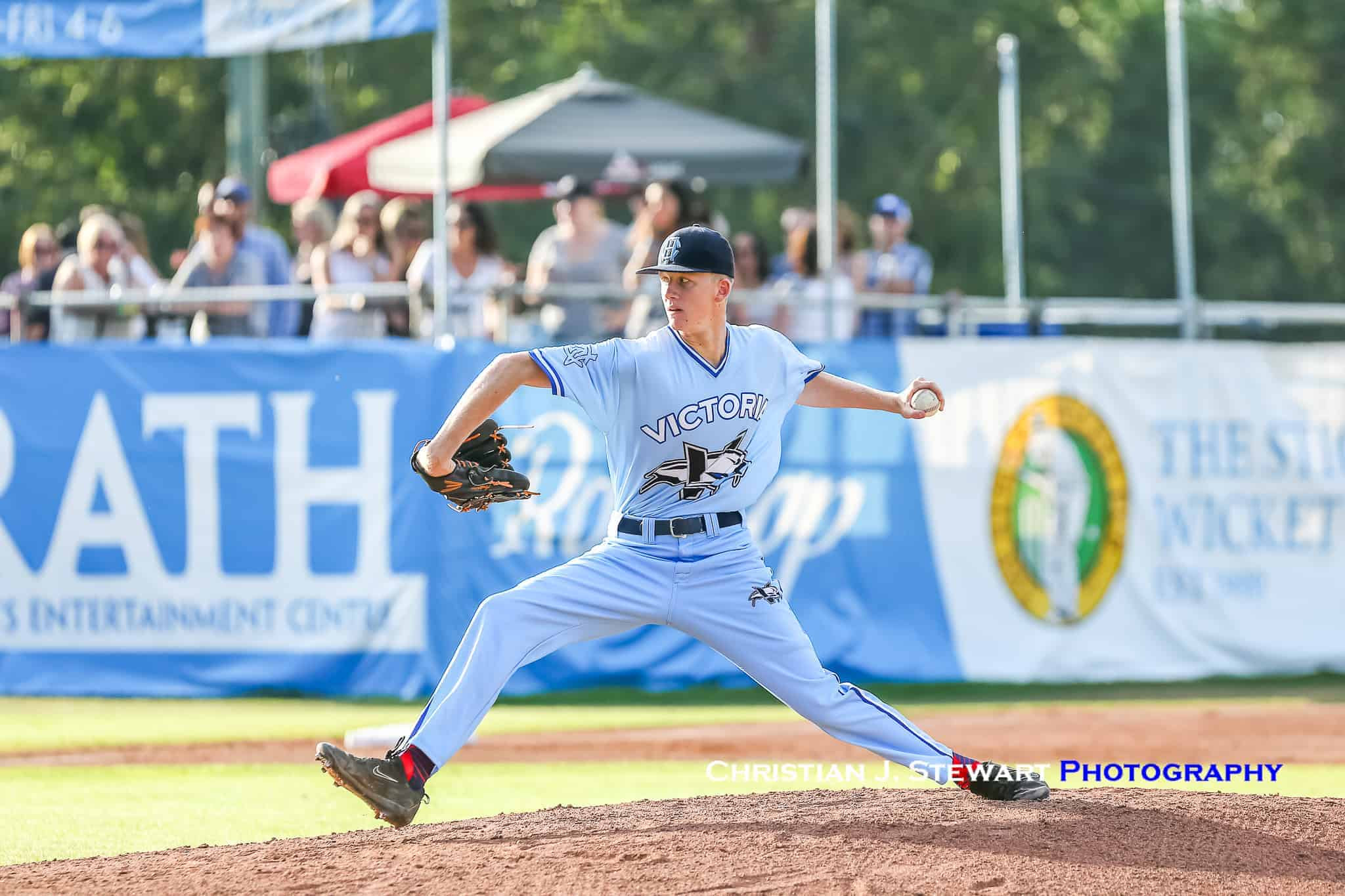 Hunter Vansau, Malinchak, and Jeddediah Fagg got the HarbourCats rally started with three consecutive singles to load the bases in the frame.

After a Caleb Ricketts RBI-single, Ober, a night after collecting two home runs, then came up and brought Fagg and Ricketts home with a three-run homer for his third long-ball of the series to put Victoria ahead 5-4. 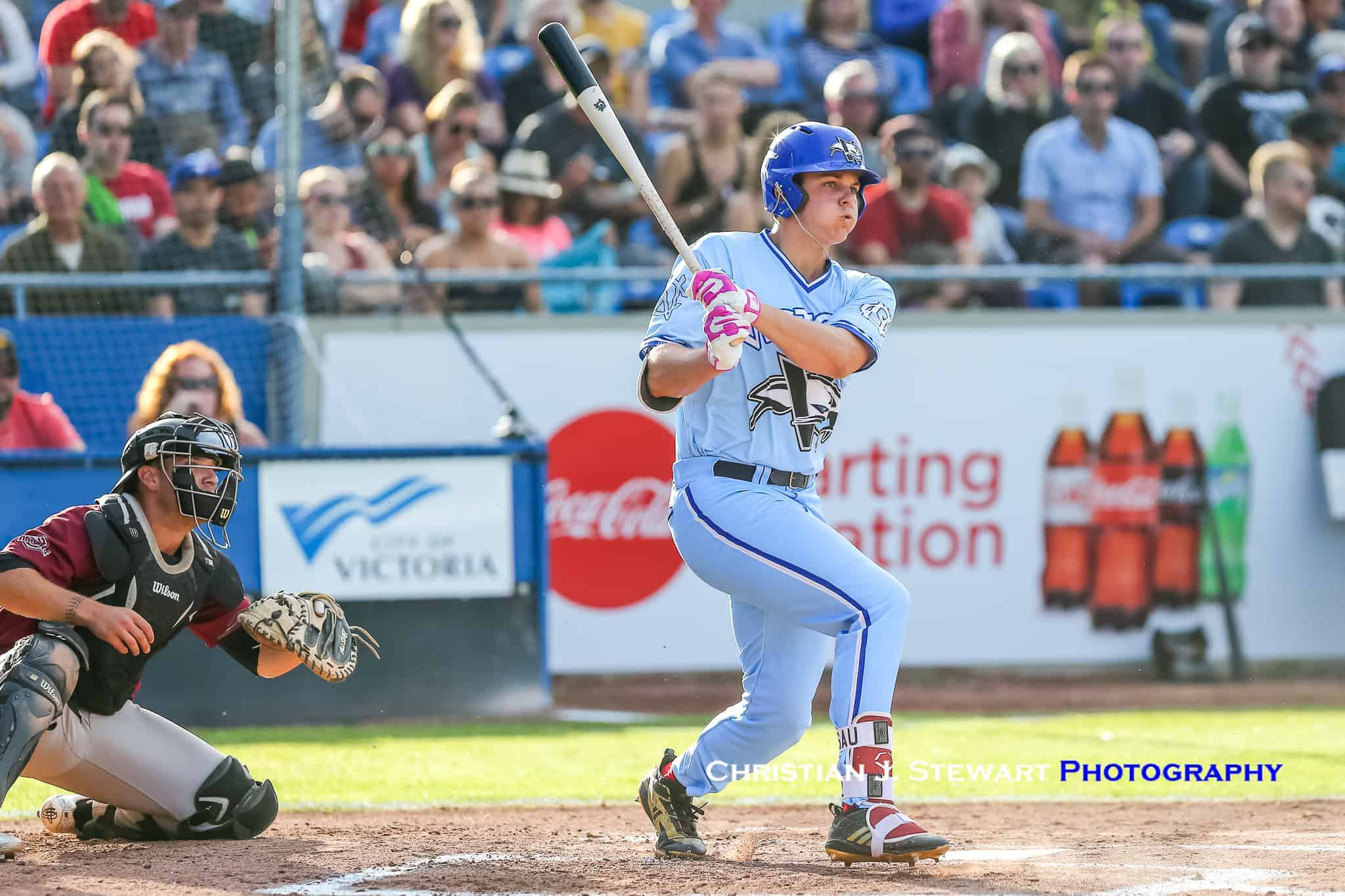 Corvallis would finally get the first two outs of the inning in the next two at-bats, but Adam Imwalle kept the rally going with a walk, and Ober’s Beaver teammate Casey hit a RBI double to pull Victoria ahead by three.

Ober collected his fourth RBI of the game with a sac-fly in the fifth, while both Malinchak and Caleb Ricketts hit matching RBI singles in the sixth to make it a 11-4 game. 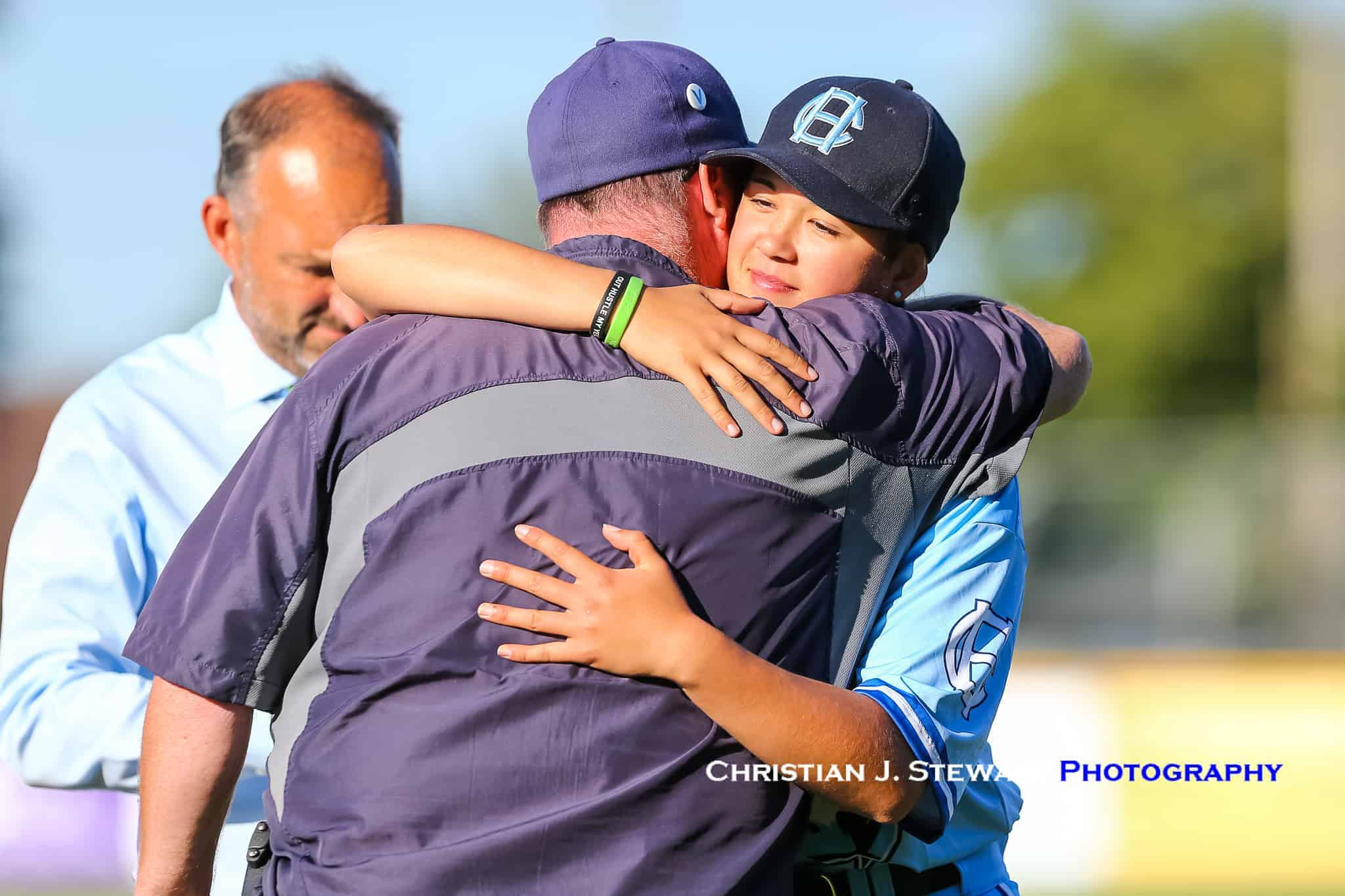 Meanwhile on the hill, Anderson settled back into that rhythm from the early stages of the ballgame, to keep Corvallis scoreless in the fifth and sixth. The Lakewood, CA native would finish with two strikeouts to six hits given up in six full innings on the mound for his first victory on the season.

Tanner Haney and Jaxxon Fagg both hit a pair of pinch-hit home runs in the seventh, while Harrison Spohn and Nicky Gibbs matched the duo in the next inning with solo pinch-hit homers of their own to make it a seven run game. 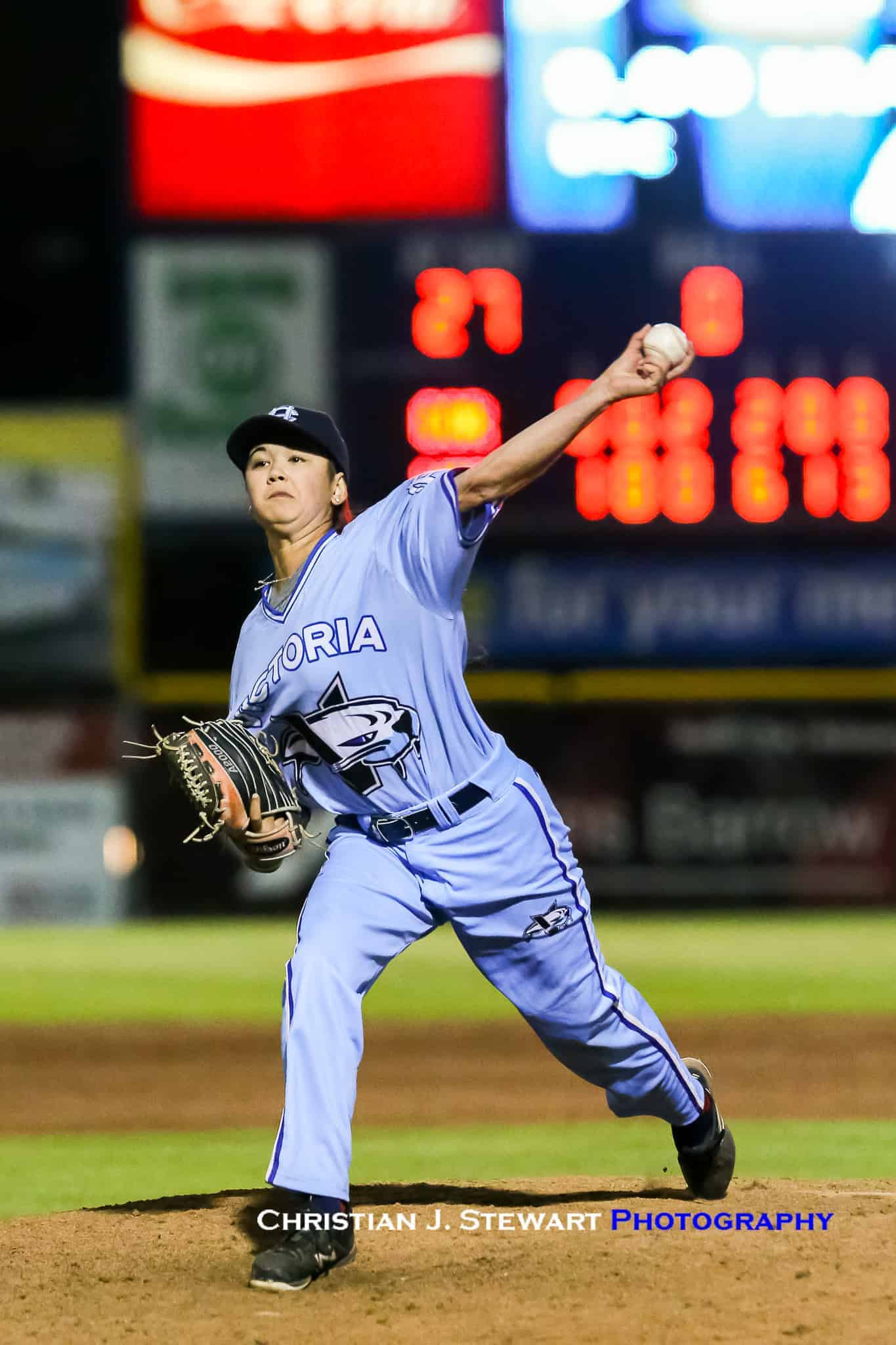 Claire Eccles delivers one of her final pitches as a Victoria HarbourCat Friday. She will be leaving the team to join the Canadian National Women’s team (Photo: Christian J. Stewart)

Playing in her final game as a HarbourCat before leaving for Team Canada in the Women’s World Cup later in August, Claire Eccles came onto the mound to a standing ovation and recorded the final out of the night to send Victoria home with the win.

With the win the HarbourCats brought their Second Half rec