With a critical portion of their schedule to immediately follow, Lions players and coaches are taking a few well deserved days off after their 2-3-0 start to 2018. For players, the break comes at an ideal time as the injuries continued to mount during Friday’s 29-25 loss to the Ottawa Redblacks. The coaching staff has already gone back to the drawing board trying to devise a plan for a tough matchup in Calgary on Saturday, August 4th. With plenty to discuss after five games, we take a look at all three facets and how they have performed throughout the first quarter of 2018. Okay, five games in maybe it’s a bit more than 25 per cent, but you get the picture.

The number one question on offence at the start of training camp surrounded Jonathon Jennings and his ability to re-discover the magical form he showed in 2016. After struggling in the first three games, Travis Lulay was pressed into duty in advance of a big comeback win over the Winnipeg Blue Bombers on July 14th. After only two games, it’s clear this will be Lulay’s team until he proves otherwise. Consider the fact they are averaging 421.5 yards of total offence in his two appearances, while Jennings only produced an average of 299.6 yards over the first three weeks. A couple of the Lions’ key receivers have enjoyed breakout performances with number 14 behind centre as well. Considering they were down both their starting left guard Hunter Steward and lost right tackle Jovan Olafioye early on, the performance was also a testament to how much better they are on the offensive line.

Number one question: can they keep up this pace? Although they came up short in Ottawa, you get the sense they should win more games with performances like that.

Ricky Collins Jr.-An 81-yard performance complete with his first touchdown as a Lion last week gave fans an idea of what the speedy receiver can bring to this new-look offence.

Joel Figueroa– Ed Hervey’s top target in free agency has given this team perhaps their best left tackle in a number of years. 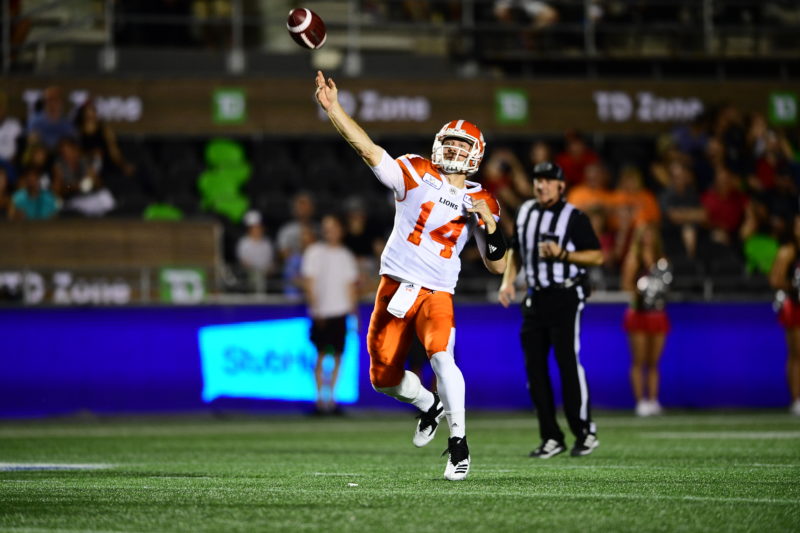 Defence- Next Man Up

With the loss of leading tackler Solomon Elimimian likely until September due to a wrist injury, second-year national linebacker Jordan Herdman filled in nicely in his first ever start on defence. The secondary has had its share of inconsistency with Winson Rose replacing Marcell Young as the starting field corner two weeks ago. TJ Lee III has emerged as the leader of the defensive backfield, he and Rose the only ones to record more than one interception so far. Newcomers Anthony Orange and Garry Peters have shown flashes of brilliance the last couple of games. Orange definitely had his best performance as a Lion in Ottawa. The revamped defensive line has maybe been a bit slower to get going than many had hoped, but Odell Willis has shown he can still be an every-down player.

Number one question: Can they consistently stop the run? After allowing Andrew Harris back to back weeks of over 100 yards rushing, they kept William Powell in check in Ottawa, holding the Redblacks’ featured back to only 50 yards on the ground. The loss of Elimimian will put the run stopping to the test.

Odell Willis- the former Mayor of Commonwealth Stadium leads the unit with four quarterback sacks and has emerged as a vocal leader for a group that maybe lacked some of that on the line in recent years.

Otha Foster III- has proven to be a solid replacement at the nickel position after the loss of Chandler Fenner to Winnipeg. With Elimimian on the shelf, Foster will help fill some of that leadership void on the back end. 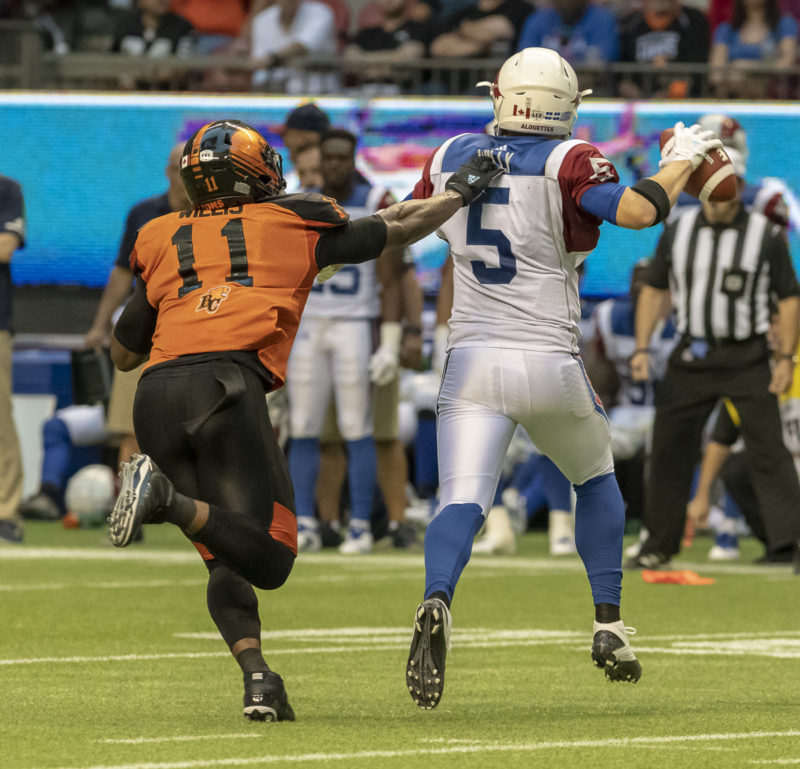 With football lifer Jeff Reinebold back in the den as special teams coordinator, the unit is certainly playing with much more of an edge than what we’ve seen in the last few years. The kick coverage unit has shown more speed, while Chris Rainey leads the entire league in kickoff return yards (558) and is fourth overall in punt return yards (255) despite playing on a sore ankle the last couple of weeks. Ty Long entered this week third in the CFL with 1,680 punting yards and is nine of 12 on field goal attempts.

Number one question: Will there be heavy rain in the forecast? We keep saying Rainey is due to take a kick back to the house. And we still think it will happen soon.

David Mackie–  the second round draft pick from 2018 has been a key figure in the special teams blocking game and has shown signs of being a mainstay as far as the Lions’ future Canadian content goes. 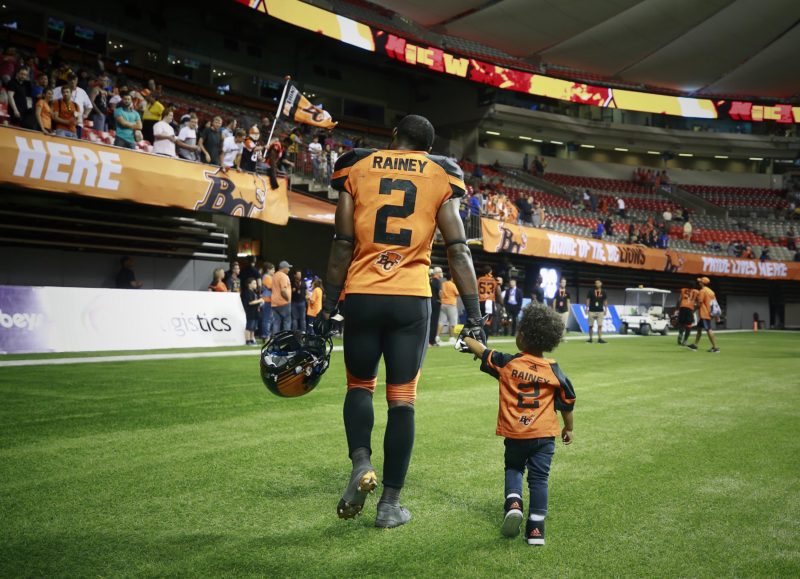 Chris Rainey and son. Winnipeg Blue Bombers at BC Place Stadium in Vancouver, BC., on Friday, July 21, 2017. (Photo: Jeff Vinnick)

This marks the first of three regular season meetings with Bo Levi Mitchell and the Stamps. McMahon Stadium has not been kind to the Lions as of late: they have dropped four straight regular season trips there, plus were on the wrong end of playoff defeats in 2014 and 2016.

The only Thursday night game of 2018 features the first of two visits from the Eskimos. These two squads met in week three in the Alberta capital with the Eskimos prevailing 41-22. Mike Reilly and the Eskimos offence were clicking on all cylinders that night, finishing with 517 yards of total offence. Edmonton won both of their visits to BC Place in 2017.

The defending Grey Cup champion Argonauts have stumbled out of the gate, winning just one of their first five games. Quarterback James Franklin appears to be the man there for now after Ricky Ray went down with a serious injury in week two. The Lions have won both of their previous games at BMO Field.

The Roughriders have dealt with their own injuries at quarterback after losing Zach Collaros to a concussion last month. Canadian Brandon Bridge has handled a majority of the reps in his absence. It should be a vibrant atmosphere with plenty of green-clad supporters in attendance for the Riders’ only regular season trip. Saskatchewan has lost their last four visits to BC Place.

Week 12: Bye. The Lions will have their third and final week off of the 2018 regular season.

The Lions begin the second half of their season with a shot at redemption against an Ottawa team that rallied to beat them 29-25 a week ago. Since joining the league in 2014, the Redblacks have split their four visits to the west coast. Prior to that, the last time an Ottawa franchise prevailed here was way back in 1990 when they were known as the Rough Riders.

Will Johnny Manziel be guiding the Alouettes ship? Considering the price Montreal paid to get him from Hamilton, you’d think he’ll get every opportunity to help them turn their season around. The Lions came out on top 22-10 in the season opener against Montreal at home and have won their last three games at Percival Molson Stadium.

The second and final set of back to back games against the same opponent goes against Manziel’s old squad. The play of Jeremiah Masoli was a big reason Manziel was shipped out of town. Prior to last week’s loss to Saskatchewan, Masolo had nine straight games of over 300 passing yards. The Lions split their only other home and home series with the Blue Bombers in weeks four and five.

The Hammer is the site of the second half of this home and home series. We can’t help but think of the eventful trip last year where Lulay racked up a career-best 436 passing yards after Jennings went down on the first play from scrimmage. The Lions are 2-2 all-time at Tim Hortons Field, winning their two most recent games there.

Not every team in the East can say it, but the Argonauts have enjoyed plenty of success in games played at BC Place in recent years, winning three consecutive visits. This Thanksgiving weekend showdown is our ‘Family Day’ game where young fans can meet their favourite cartoon characters like Sponge Bob and Ninja Turtles. Check bclions.com for more info closer to the date.

Wally Buono makes his final regular season visit to the stadium he ruled the home sidelines from 1990-2003. As a coach with the Lions, Buono has an all-time regular season record of 7-7-1 at McMahon as a visiting head coach and has dropped both of his visits in the playoffs.

Reilly and company make their second and final trip in a contest that could have lots of playoff implications.

The final regular season road trip involves the only visit to sparking Mosaic Stadium. Many have considered last year’s 41-8 blowout loss in Regina as a turning point that contributed to a second half collapse that resulted in the first time out of the playoffs in over 20 years. The prairie weather could very well be a factor in this one as well.

Props to the schedule maker for having Buono’s regular season swan song come against his former team. In what should be an excellent tribute night to the CFL all-time wins leader, the home side ultimately hopes there is also plenty at stake for what could happen later in November.