In a game of runs, Canada had one more run in them than the Iroquois did. The result was a 15-10 win and a gold medal at the World Junior Lacrosse Championship.

Canada got off to a hot start, scoring three goals in the first 4:18 of the game. Aaron Greyeyes did what he had been doing all tournament, scoring in spectacular fashion, to get the Iroquois on the board and stem the Canadian momentum. Greyeyes picked up a loose ball in the corner and immediately saw what he was going to to, which turned out to be racing along the goal line on his off side diving across the crease to tuck a backhand whip shot into the net.

The Iroquois got another goal back, then the teams went through a taut five-minute period with no movement from the 3-2 score. Brad Lyons broke the scoreless stretch when he tapped a ball away from an Iroquois player to himself and raced in alone to beat Cecil Jacobs for a power play goal with 2:21 to play in the first quarter.

Canada opened the with another transition marker, from Brendan Szabo, and then another power play goal, this time by Colin Berglof, to extend its lead to 6-2.

They were able to do so largely thanks to Brody Harris, who was named their player of the game after stopping 59 of the 69 shots he faced for an ethereal .855 save percentage. Those numbers were all the more impressive given the quality of many of the shots that he faced. Again and again, Harris made an original stop and then made a brilliant acrobatic save off the rebound.

After Canada’s streak of three goals, it was the Iroquois’ turn and they did their part, finally being able to solve Harris to get three straight goals before the half ended, making the score 6-5 for Canada when the teams went to the intermission.

Neither team scored through the three and a half minutes of the third quarter, then the Iroquois got a golden opportunity to tie things up. Haiden Dickson had a momentary lapse in discipline and drew a penalty for a retaliatory slash. Brad Lyons, though, turned the tide when he ran in one on one with an Iroquois defender and decided to reach around him for a low shot to the near corner. It may not have been a shot his coaches were thrilled with him taking, but he was feeling hot and it worked out as he put the ball perfectly inside the low near side post. The shorthanded marker made it 7-5 for Canada and appeared to re-energize the team in red and black.

Tanner Buck, who led Canada in scoring with 14 points in the tournament, connected then Lyons was at it again, taking an outlet pass from Harris and burying it to stretch the lead to 9-5. When Kyle Dawson picked up a rebound and slipped it home with just two seconds to play in the third quarter, it looked like a dagger from which the Iroquois may have trouble recovering as Canada had outscored them 4-0 in the frame to go up 10-5.

The Iroquois are a resilient bunch, though. Marshall Powless scored the first two goals of the fourth quarter, the second one coming when Greyeyes slipped on to the top of the Canadian crease to steal a rebound and flicked the ball out to Powless in the high slot. Powless then set up Blaze White for a goal. Minute after that, Kainen Francis cut down the shoulder of the Canadian zone and batted home a perfectly placed and timed cross-floor pass from Greyeyes.

All four goals game in a span of just four minutes and 32 seconds. If there had been any doubt that this was a game, the Iroquois run erased it.

Sometimes, though, a comeback like that demands the expenditure of large quantities of energy that leave a team vulnerable to a counter punch. Canada’s response came in the form of another transition connection when Harris hit Szabo with a pass that he converted into a goal just 31 seconds after Francis had capped off what turned out to be a four-goal run for the Iroquois.

Szabo’s goal kicked off a four-goal run for Canada that was even quicker that the Iroquois’ similar run had been. Matthew Wright emerged from the ensuing face-off scrum with the ball and momentum towards the Iroquois net and and he found a spot to beat Jacobs. A spectacular diving goal by Dickson then a low corner snipe by Kyle Dziwenka made it four goals in just 2:11 of playing time, stretched the Canadian lead to 14-9 and all but sealed the deal.

Despite applying pressure, the Iroquois were only able to score one more goal, from the stick of Powless with 5:12 to play. Canada maintained its solid defensive play and Harris was impeccable to keep the Iroquois at bay.

With less than two minutes to play, the Iroquois pulled their goalie but neglected to get a sixth attacker on the floor. When Lyons came up with the ball, he saw Szabo racing ahead and fed him the ball while Jacobs sprinted back to the net from the Iroquois bench. Owen Martin stepped between the pipes to try to make a save, but Szabo bounced his third goal of the day just inside the far post. That proved to be the end of the scoring with Canada up 15-10. 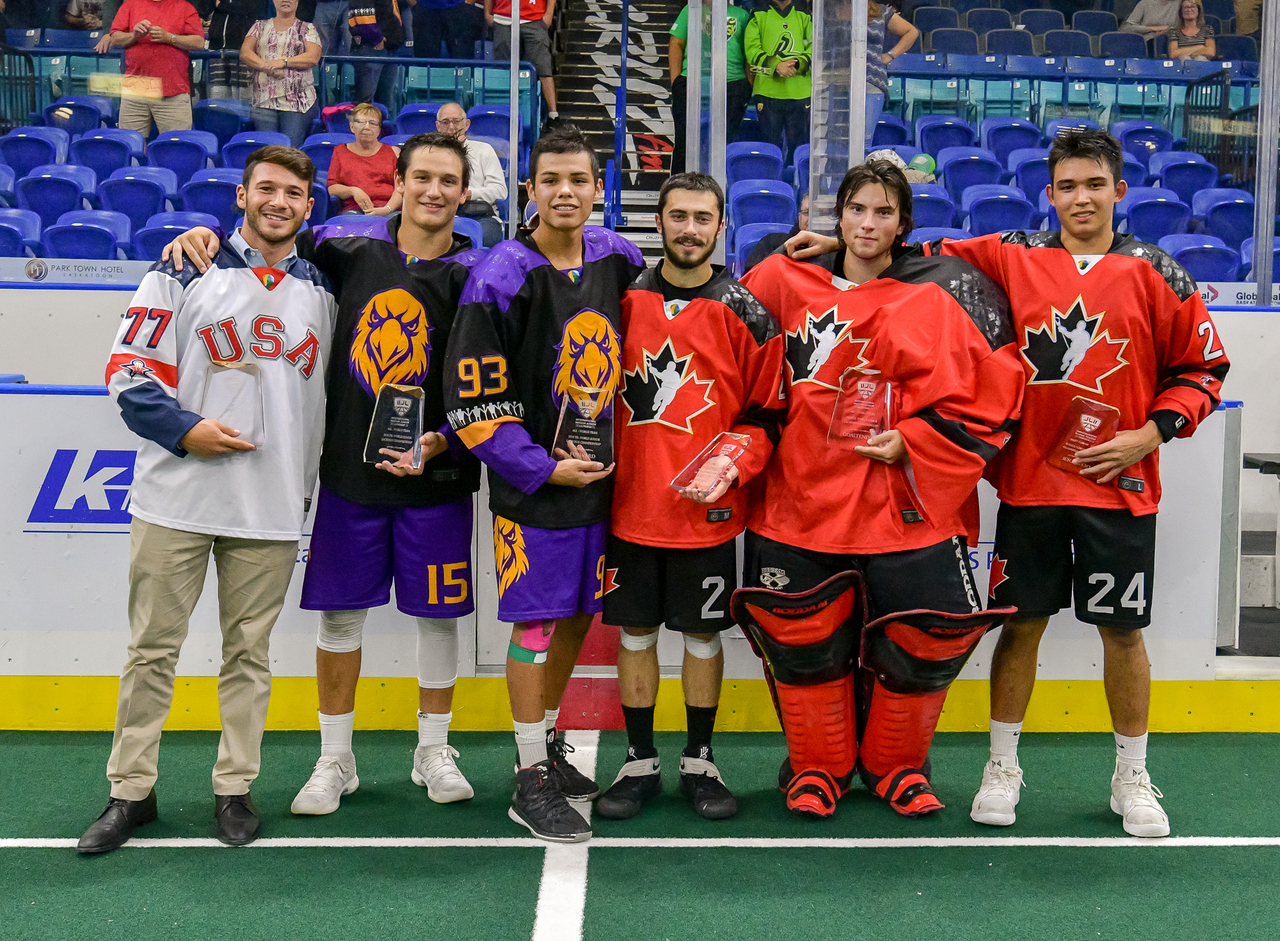 Harris was the goalie for the All-World Team. Justin Napolitano of the USA and Matthew Wright of Canada were named the All-World defenders and the Iroquois’ David Anderson was the All-World Transition player. One forward from each of the teams in the gold medal game made that team as well: Powless from the Iroquois and Buck from Canada.