They smelled blood in the water early and finished with a pair of knockout punches that, perhaps, put the rest of the league on notice. Bo Lokombo‘s first quarter interception led to their only major of the night while TJ Lee and Anthony Orange each returned interceptions to the house in the late stages as the BC Lions (5-6-0) prevailed 32-14 over the Montreal Alouettes (3-9-0) on Friday night.

The win is the Lions’ first away from home in 2018 and the first time all season they have won back-to-back contests. In doing so, they move into a tie with idol Winnipeg for a crossover playoff spot and also hold a game in hand on the struggling Blue Bombers. Shawn Lemon did his part with a pair of sacks on Montreal quarterback Antonio Pipkin.

“It was fun, man. I think it felt like practice out there,” said Lemon in a joyous visiting locker room.

“Everybody played together, the game plan was great for us, we just executed and played fast and when you’re having fun most of the time you’re going to be productive.”

For a second straight week, Jonathon Jennings was forced to take over for an injured Travis Lulay as the veteran quarterback went down with a left shoulder injury one play before Jennings’ touchdown strike to Bryan Burnham opened the scoring. The fact they were able to hit paydirt would ultimately set the tone early.

“It was just good to find a way to win a tough fought game,” explained Jennings.

“Their defence really came to play, but I thought we did some really good things out there. It was huge to get that first win (on the road), even bigger to get the second one in a row. Now we’re trying to start something special, our defence is playing lights out, we just have to continue to improve and I’m excited about what this team can do.”

After having the shoulder reset, Lulay watched from the sidelines and will be re-evaluated after the team flies home. Good news for Lions fans is the fact Lulay seemed to be in high spirits.

“If it’s something we can get resolved then we’ll get it resolved. The left shoulder is easier to deal with than the right.”

Never one to pay much attention to what outsiders say or think, the CFL’s all-time wins leader knew his team would eventually scratch the road itch.

“That’s media talk. What I was more hung up on was the fact we let games get away on the road,” said Buono.

“There were games where we should have won, but yet we don’t finish, don’t make a play and tonight we made some great plays and we made them count.”

With a two-game win streak and the sense they are starting to gel when it matters the most, the key for Lemon and company will now build on this. Don’t believe for a second they will take anything for granted just yet.

“(There’s) most definitely a lot of room for improvement, but it’s definitely good for us as a defence. We registered seven sacks today, six last week so that’s what? If my math is correct that’s 13 in two weeks. We just have to keep building, getting after quarterbacks and making them uncomfortable.”

And you couldn’t wipe the smile off of his face at the mention of those guys lining up behind him creating those huge turnovers.

“That’s the reason for our success up front. In my opinion, we have the best secondary in the league,” stated Lemon.

“They cover for us and we do out job up front.”

And in the event they have to give Jennings the keys for a game or tw0, the head coach is confident they can keep it rolling with the younger pivot re-establishing some of his confidence.

“Jonathon has played a lot of football for us and he played last week, which helped his confidence,” said Buono.

“We give the number two quarterback a lot of reps so it’s not like he doesn’t ever get reps. He should be well prepared.”

Jennings finished with a modest 180 yards passing but did a good job extending key drives when it mattered most. The Alouettes’ lone touchdown came on an 87-yard blocked field goal return by Tommie Campbell that gave the home side a brief 14-13 lead going into the fourth quarter.

Your squad returns home to face the Hamilton Tiger-Cats next Saturday night at BC Place in the first of a crucial back to back series. 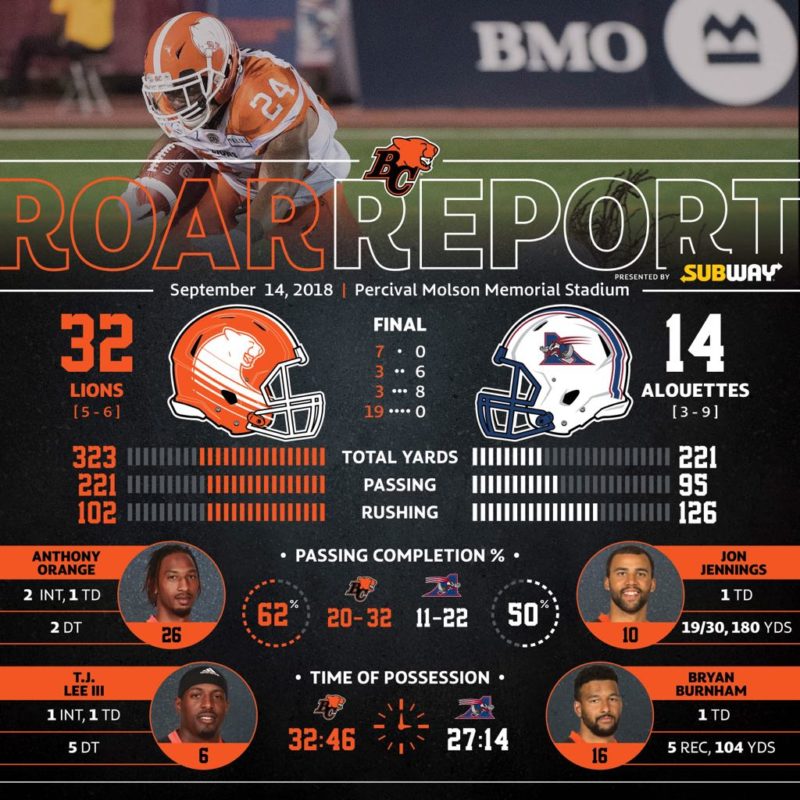 7- the total number of sacks for the stout defensive front. Two for Lemon and Davon Coleman and one each for Lokombo, Jordan Herdman, Odell Willis.

4- interceptions for the Lions, two for majors.

104- Burnham’s receiving yard total, his highest of the season.

95- the total number of passing yards for Pipkin.

421- the number of days the Lions had gone between recording two wins in a row. No doubt, a nice monkey off their backs.

The Lions will return home to face the Hamilton Tiger-Cats on Saturday, September 22nd in the first of a critical back to back. It is a 7:00 PM kickoff at BC Place.