Every year, in some shape or form, we’re reminded that in the Canadian Football league, your playoff outlook can change drastically over the course of a couple of weeks. That’s what’s going through the minds of the BC Lions and their fans ahead of a week 15 home tilt with the Hamilton Tiger-Cats.

The Leos’ first two-game win streak of 2018, coupled with some key results on the out of town scoreboard, and all of a sudden the 5-6-0 Lions control their own destiny for second place in the Western Division and a home playoff date in November. Yes, you read that right. Should Wally Buono’s squad win all of their remaining seven games, while beating the Saskatchewan Roughriders by at least four points on October 27th, they would be assured of starting the playoffs at BC Place. But for the moment let’s brush aside the crazy talk and take the old “one game at a time” approach.

As for the Wild Wild West itself, it’s now game on. Below the 10-2-0 Calgary Stampeders, only four points separate the second place Edmonton Eskimos from the last place Winnipeg Blue Bombers. If the regular season ended today, there would be a crossover by virtue of the fourth place team having more points than the third place team in the East. The Lions currently hold down that final playoff spot because of a game in hand on the 5-7-0 Bombers.

Simply put, this is shaping up to be a seven-week Western showdown of epic proportions. Perhaps Clint Eastwood may be vying for a role somewhere. For now, let’s leave the Stampeders out of it, as Bo Levi Mitchell and company have shown no signs of slowing down just yet. Here is an outlook of the Lions and the three other Western clubs remaining games. 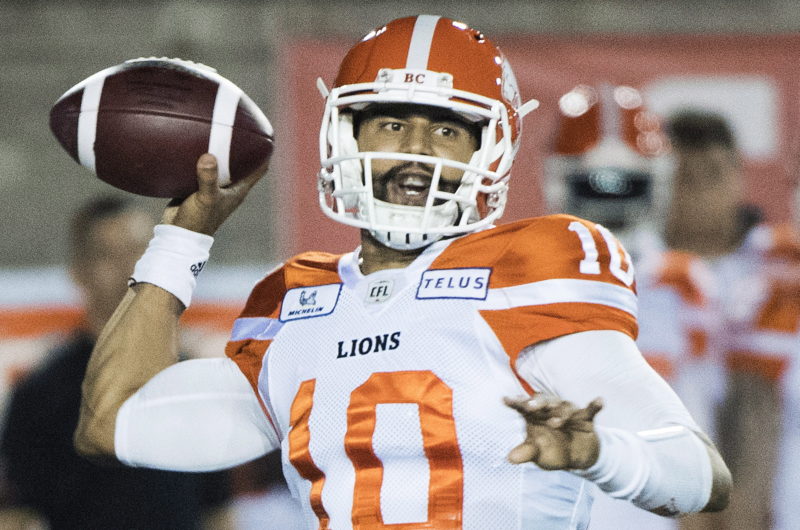 BC Lions quarterback Jonathon Jennings throws a pass during first half CFL football action against the Montreal Alouettes in Montreal, Friday, September 14, 2018. THE CANADIAN PRESS/Graham Hughes

The Outlook: The Eskimos have to be pretty confident about their situation as quarterback Mike Reilly is having another MOP-type season. They probably still feel they have an outside shot at first place after they clinched the season series with Calgary in their Labour Day rematch victory on September 8th. Still, making up three games on their provincial rivals might be a tall task. Edmonton currently holds the season series on both Saskatchewan and Winnipeg with their October 19th trip to BC Place potentially a big one as far as the Western outlook. See below.

The Outlook: A recent four-game winning streak put the Riders firmly in the discussion for a home playoff game before Saturday’s loss to Ottawa raised some of the old questions about their inconsistent offence. Saskatchewan has clinched the season series with Winnipeg so staying ahead of them all but assures them of making the playoffs for a second straight season. They can also lock up the season series with Calgary on October 20th. The long and short of it: The Riders can end up finishing anywhere in this complicated puzzle. Having a bye on the final week could cause some anxiety. 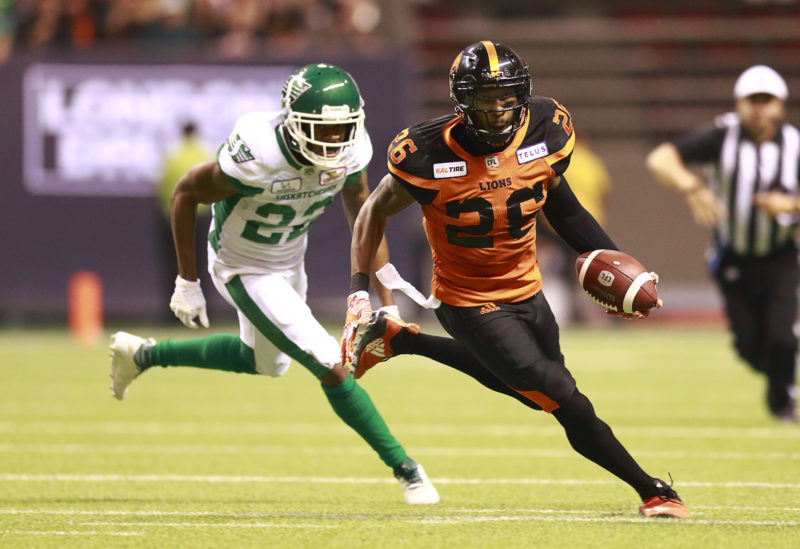 VANCOUVER, BC – AUGUST 25: The Saskatchewan Roughriders play the BC Lions in their CFL game August 25, 2018 at BC Place in Vancouver, BC. (Photo by Jeff Vinnick/BC Lions)

The Outlook: As mentioned, a clean sweep of the remaining seven games and win over Saskatchewan by four assures them of a home playoff date. But let’s stay focused on the priority right now, which is staying above the Blue Bombers as Winnipeg holds the tiebreaker by virtue of total points in the two earlier meetings (58-39). A week 17 win over Toronto would go a long way in locking down a potential crossover spot. The season series with Edmonton will be up for grabs on October 19th so if the Lions can be within two points of Mike Reilly and company going into that one, get your popcorn ready. It appears Jonathon Jennings has the keys to the offence once again. What an opportunity for the young fella.

The Outlook: A four-game losing streak and questions about their starting quarterback have recently halted the parade plans in the Manitoba Capital. On paper, it might suggest the Bombers are in tough with two trips to Edmonton, one more date with Calgary and visit to Ottawa where the Redblacks are battling for top spot in the East. That being said, Matt Nichols has brought this time back from life support before, Adam Bighill is capable of leading a defence back from anything and they are probably saying the same thing the Lions are right now: Just win and they’ll be okay.

It’s a credit to the roster additions by GM Ed Hervey that have put the Lions in a position to control their own destiny with seven games to go. For as many questions there has been about the offence, should the rejuvenated defence continue to perform the way they have, Jennings and company won’t be pressured to put up 35 points every week. Get Eastwood on board. It’s a Western of Spaghetti proportions.