He may have only one professional experience under his belt, yet Andrew Peirson has already mastered two essential arts: being humble and focusing on the present. Even after the offensive line grounded and pounded until the final whistle, allowing Jeremiah Johnson to rush for 118 yards, the rookie out of Gannon University fully understands you are truly only as good as your last outing.

“I don’t think I played overly well, but I got the job done at the end of the day,” says Peirson.

“You can have your best game, but if it doesn’t carry over you can lose your spot or even be cut. I come into work every day with that mentality. I’ve gotten to where I am by not strutting around with the big shoulders and everything. I’m a little dog: you’ve got to fight every day and prepare to go to war.”

Injuries to Cody Husband and Peter Godber have made Peirson the club’s starting centre for their most critical stretch of the 2018 regular season. At 7-7, they could potentially lock up a playoff spot with just two more victories; this Saturday in Calgary and the following week at home to struggling Edmonton. As for getting a shot to succeed in a live game environment, Peirson credits the preparation he has put in since day one of training camp in Kamloops. 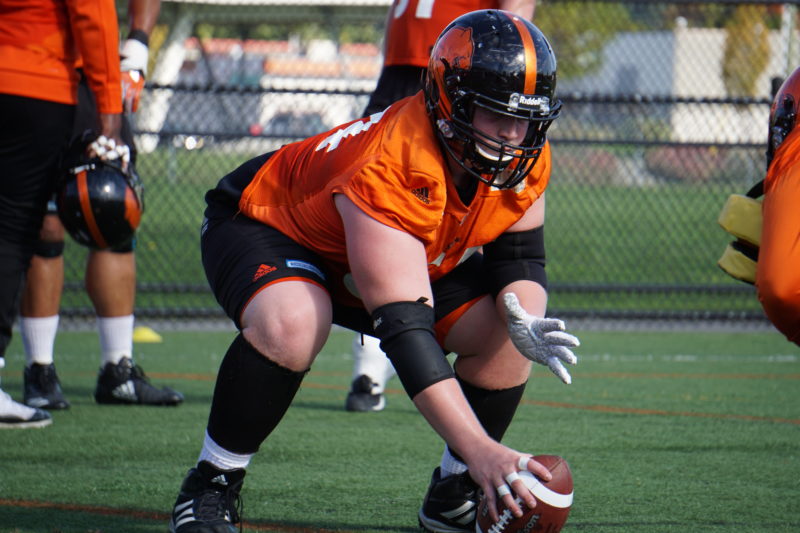 “Mentally, I have one of the best offensive line coaches in the league, and physically I’m going against the league’s best defensive line (in practice) in my opinion,” explains Peirson.

“You see them making plays every week. So I felt ready and once I went in there it was a lot easier than in practice. That’s what the coaches and everyone wants.”

It’s a common theme for young offensive linemen to credit the tutelage of Dorazio for helping them succeed; both as a player and on a personal level.

“It’s safe to say he knows his stuff, but I think it goes a lot deeper for what he expects of you,” says Peirson of his position coach.

“On a personal level, he really knows how to connect with the guys and he knows when to address things. He’s a really good guy and you can tell from the bottom of his heart that he wants the best from you and for everyone to be successful. He will put you in a position to be successful.”

Although it’s been a small sample size of game action, the youngster has already caught the eye of his teammates.

“It’s funny; at the end of camp I pulled him aside and said ‘listen youngin’, you’re going to be good,” recalls Johnson.

“He got his opportunity and he showed the whole league he can be more than (just) a capable centre in this league. Going to Calgary is going to be a test for him, it ain’t going to be easy for him, but I see his resilience, I see how hard he works in practice and in the workouts and I just think he’s just going to do very well. He’s the youngest, but he’s the controller of that offensive line.”

Growing up in the winter palace of Kingston, Ontario meant Peirson was pretty much required by law to play hockey; something he also excelled at before his offensive line body type became a bit of an obstacle.

“My joke about hockey is I played it about 200 pounds ago,” laughs Peirson.

“I was at a high level and then as I started going through puberty and gaining weight I eventually quit. I took all the money spent on hockey to focus on my training for football.” 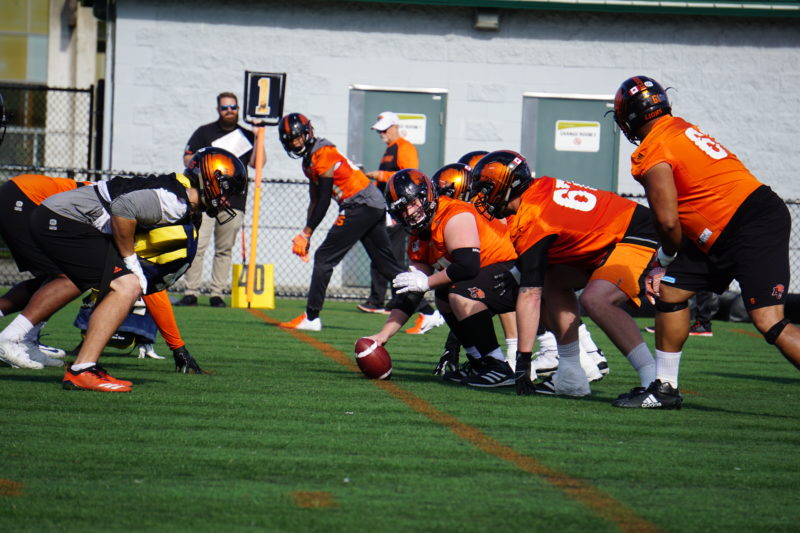 And it turned out to be a worthwhile investment. After helping his Holy Cross Crusaders win the Kingston Area Schools Athletic Association championship, the 6’3, 300-pound lineman caught the attention of Gannon, a Division II school in Erie Pennsylvania. Along with making a name for himself on the football field, Peirson earned a double major in Finance and Entrepreneurship and also collected Pennsylvania State Athletic Scholar Athlete Award in 2015. Perhaps that’s the reason he sounds like a seasoned veteran when you speak to him.

For Peirson, the main task at hand is heading into the hornet’s nest that is McMahon Stadium. With the Calgary weather expected to be a factor, his natural response is ‘bring it on.’

“I went to college in one of the snowiest cities in the States. I’m all about the cold,” states Peirson.

“I’m ready; I know a lot of the guys up front don’t care. That’s when the men come out. We’re all pros here, we’re in Canada, we love the sport and any time we get the chance to put our cleats on and hit the turf it’s a great day.”

More than anything else, it will be a chance for him and the offensive line to prove they can play with the best team in this league.

“I know the guys up front are eager to play this Calgary front. It’s no joke up front, they have a great defence and we’re preparing for that. We’re excited. There is lots of momentum and with it, you have to have that chip on your shoulder and keep working hard.”

Living in the present: a major key to success for any player, especially the rookies.