It was a hard fought victory for the BC Lions (8-7) on Saturday night in Calgary. Your Lions took an early lead on the Stampeders (12-3) and were able to hold on for the 26-21 victory.

The victory had the feel of a boxing match, with both teams getting in some good jabs before the Lions threw the knockout punch late in the fourth quarter. And according to Coach Wally Buono, the Leos took inspiration from the 1985 World Middleweight Championship brawl between Marvin Hagler and Thomas Hearns during their 26-21 takedown of the Calgary Stampeders on Saturday night. 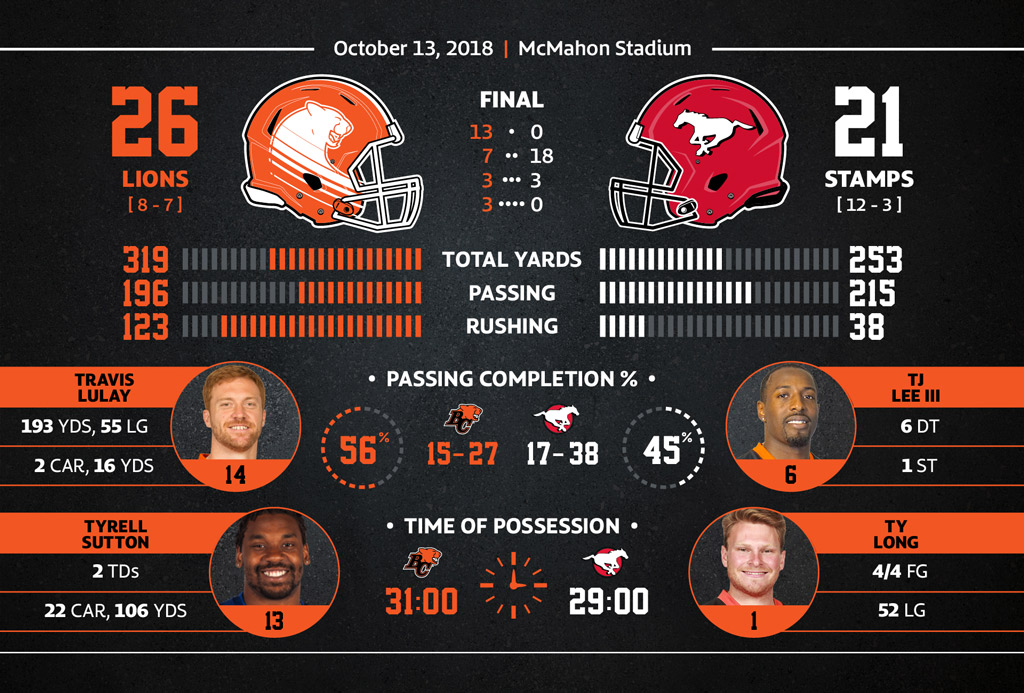 “We watched the Hearns, Hagler fight today,” said Buono postgame. “Part of that was to show the players how two great champions come together and how they have to be able to deal with the good and the bad.

The Lions most definitely didn’t give up. They took a commanding 20-4 lead with just over three minutes remaining in the first half, but the Stamps charged back to make it a 20-18 game at the half. Calgary took their only lead of the game in the third quarter, going up 21-20.

Remembering the lessons learned from the Hagler-Hears fight, BC came out swinging and never threw in the towel. The Leos leaned on the strong play of their defence and special teams, going ahead 23-21 in the third thanks to an impressive 52-yard field goal from Ty Long.

The Lions never looked back from there. Clamping down on Bo Levi Mitchell and the Stamps to secure their first victory in Cowtown since 2014. The monkey is off the Lions’ backs and quarterback Travis Lulay is happy about it.

“We have certainly had our struggles winning in Calgary, as has every team in this league,” explained Lulay. “It says a lot about our effort tonight, our focus, that we were able to come out on top. We didn’t play it perfect but we fought like crazy.

The Lions received important contributions from their defence at critical times tonight, particularly from their d-line. Shawn Lemon led the way for BC on defence, bringing Mitchell down for a sack in the fourth quarter to halt a Calgary drive. The quarterback takedown was the 60th of Lemon’s career and it couldn’t have come at a better time.

Ty Long had a great game tonight, not only hitting on the 52-yarder to put the Lions ahead in the third, but also going 4/4 on the night. Consistency in the kicking game is something Lions’ fans are used to this season with Long establishing himself as the premier booter in the CFL.

Tyrell Sutton’s power running added another dimension to the Lions’ attack. He ran for 106 yards and two scores on 22 carries in his Leos’ debut. The Northwestern grad looks great in Orange and his brand of running figures to pay big dividends in the postseason.

“Our offensive line and Tyrell Sutton really set the standard in the first half,” said Lulay on the Lions’ newest offensive weapon. “Sutton made some plays and we took advantage of those scoring opportunities early.”

123 – That is the amount of rushing yards the Lions had tonight. Running the ball effectively is key for every team that hopes to go the distance in the dance and BC did a great job tonight.

319 – The Lions were able to hold the Stamps to just 319 total yards. The high-powered passing attack was only able to muster 215 yards.

2014 – This win represents BC’s first victory in McMahahon Stadium since the 2014 season. Beating a team like the Stamps on the road does nothing but good things for a club.

20 – The Lions generated plenty of O in the first half, racking up 20 points on the vaunted Stamps’ defence.

When asked by a reporter after the game about the feeling of winning his final regular season game in Calgary, Wally Buono said, “okay, I’m going to admit it, it’s extra special to win this one.”

The Lions return home to battle the Edmonton Eskimos at BC Place on Friday, October 19th. The game could have serious playoff implications for both squads and kickoff will be at 7:00 pm.