On Wednesday, the CFL announced the 2018 West Division All-Stars and the roster has plenty of orange flavours. No less than seven members of the BC Lions were named to the squad, a total that matches the Winnipeg Blue Bombers for the highest number of players represented. The first-place Calgary Stampeders and Saskatchewan Roughriders each have five, while the Edmonton Eskimos have two represented. Below is the list of Lions players announced:

The always-dangerous game breaker is coming off his third consecutive 1,000-yard campaign. Burnham led all Lions in receiving yards, touchdowns and also added ten receptions of 30 yards or more, further proving he is one of the league’s greatest deep threats. Burnham’s best outing this season came in the remarkable come from behind win over Hamilton on September 22nd: not only did he catch two touchdown passes, but his highlight-reel grab on the game-tying two-point conversion was the subject of one of the greatest action shots of 2018.

57 defensive tackles and a career-high eight sacks highlight Coleman’s first season in orange. Since coming over in a training camp trade with Hamilton, Coleman has proven to be a very key piece of the Lions’ new-look defensive rotation. In a rare accomplishment for a defensive lineman, he recorded two interceptions in a big victory over Toronto on October 19th.

Many wondered how they would replace the production of Chandler Fenner at nickel, but the addition of Foster III early in free agency would quickly solve those problems. The 2015 Grey Cup champion racked up 57 defensive tackles, three sacks and a pair of forced fumbles.

Emerging as one of the key leaders of this new-look defence, Lee recorded a career-best 81 defensive tackles, the second-highest on the squad behind Bo Lokombo, and a big interception return for a touchdown against Montreal. The fifth-year Lion had three interceptions and two forced fumbles.

Another key addition by GM Ed Hervey in free agency, Orange’s play at corner improved greatly as the season went on. He and teammate Winston Rose finished in a tie with three others for the CFL lead with five interceptions. Orange’s most impressive outing was part of that defensive domination in Montreal on September 14th when he recorded two interceptions, including one taken back to the house to help salt away a big 32-14 victory. 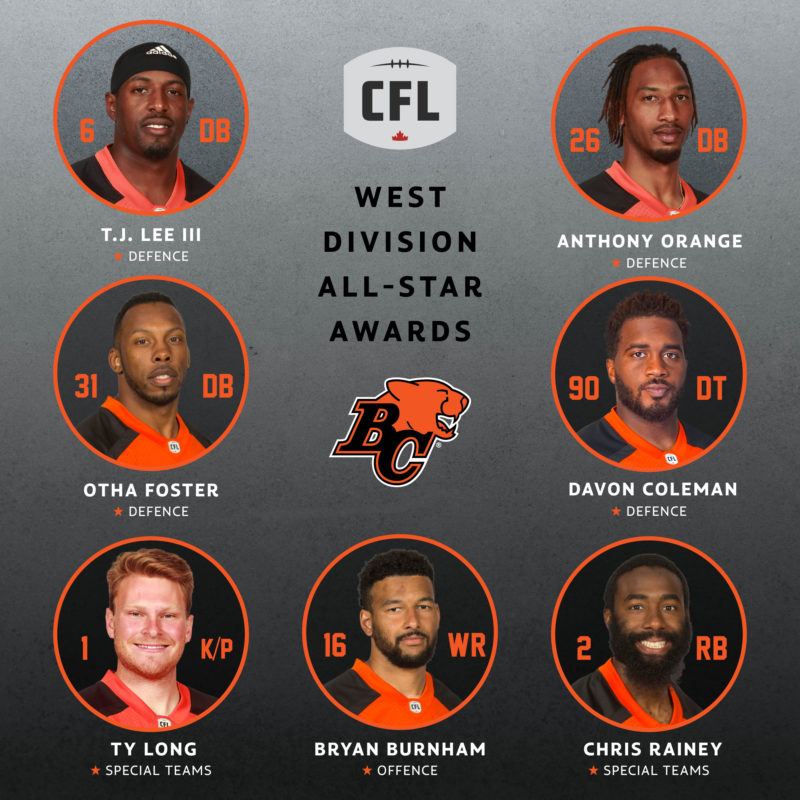 The accolades keep coming for Long, the Lions’ nominee for both Most Outstanding Player and top Special Teams Player. Along with leading all league kickers in punting yards and punting average, he was once again Mr Automatic when it came to field goals. Long hit 43 of 49 total attempts, his longest successful try coming from 52 yards out. In a six-field goal performance against Toronto on October 19th, he was successful from 50 and 51 yards out on back to back tries.

The Rain Man was once again productive in his fourth season with the club, leading the CFL with 2,174 kick return yards and also finished second to Ottawa’s Dionte Spencer with 2,626 combined yards. Rainey had two punt return touchdowns this season, including a big one in the first half against Edmonton on August 9th that helped provide the springboard to a big second half comeback.