The Port Angeles Lefties hopped across the Strait of Juan de Fuca and became the first West Coast League team based in the U.S. to play a team from Cuba in a 13-5 exhibition victory over Union de Reyes from Matanzas at Royal Athletic Park.

In the first of four games in the Greater Victoria Sport Commission International Series, both the players from Cuba and Port Angeles shook hands and posed for pictures in an eventful pregame ceremony.

History was made today as the Port Angeles Lefties and Team Cuban battled on Canadian soil at Wilson’s Group Stadium. (Photo by Christian J. Stewart)

After showing Victoria fans last year why they are widely considered one of the premier baseball nations in the world in a victory of the HarbourCats in July, Union de Reyes was eager to tackle a challenge from the Lefties. 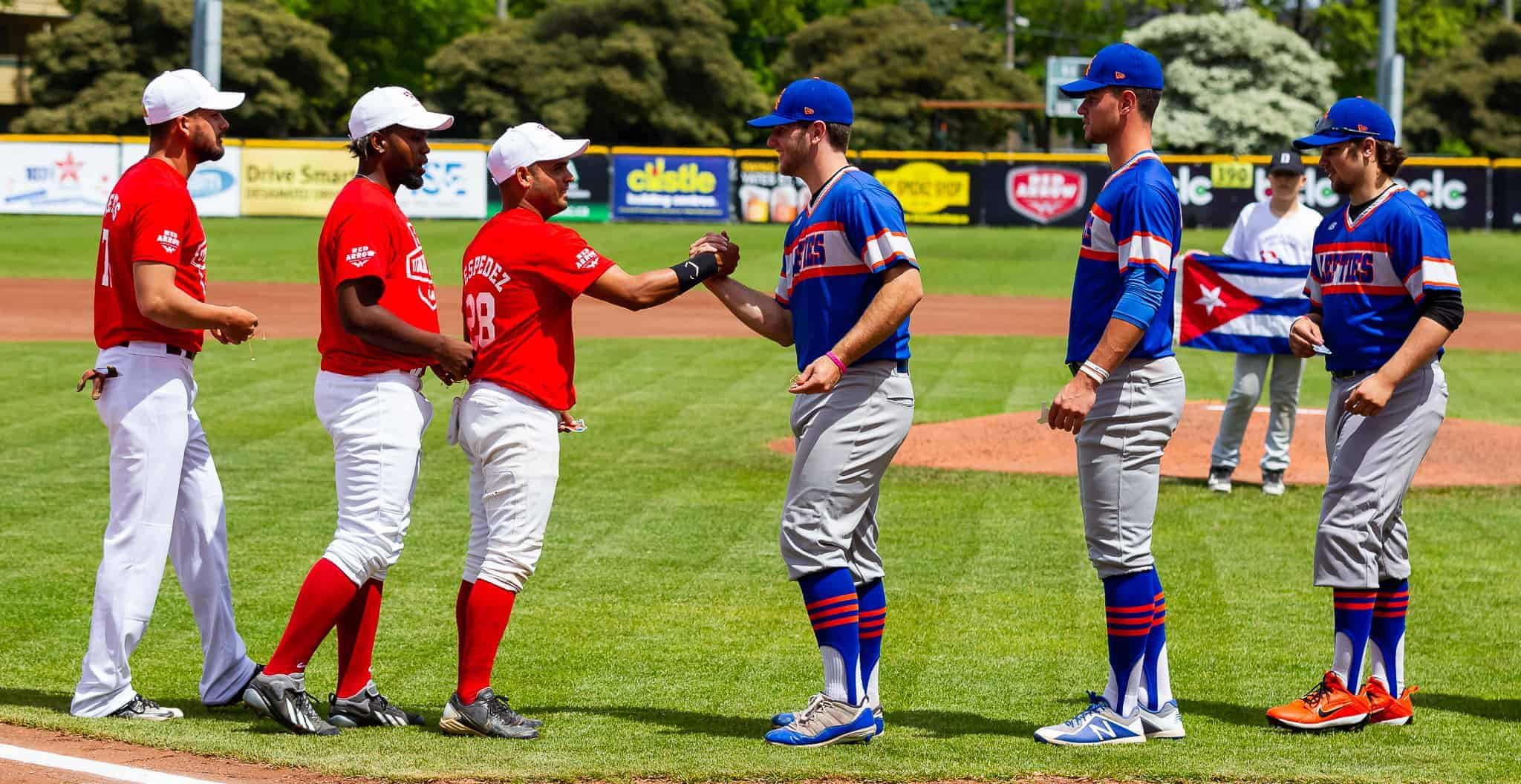 Players from Cuba and Port Angeles shake hands and exchange gifts during the pregame ceremony. (Photo by Christian J. Stewart)

However, CJ Shauwecker ensured the large contingent of Port Angeles fans in the crowd of 1,469 wouldn’t venture back home unhappy, as his three hits and two RBI’s helped lead the way for the Lefties.

Shauwecker got to work immediately in the top of the first off Cuban starting pitcher Essiel Fuentes, knocking in Ronnie Rust with a RBI single.

After the Lefties doubled their lead courtesy of a wild pitch in the third, Shauwecker notched his second RBI of the game with a towering double to the wall to give Port Angeles a 3-0 advantage. 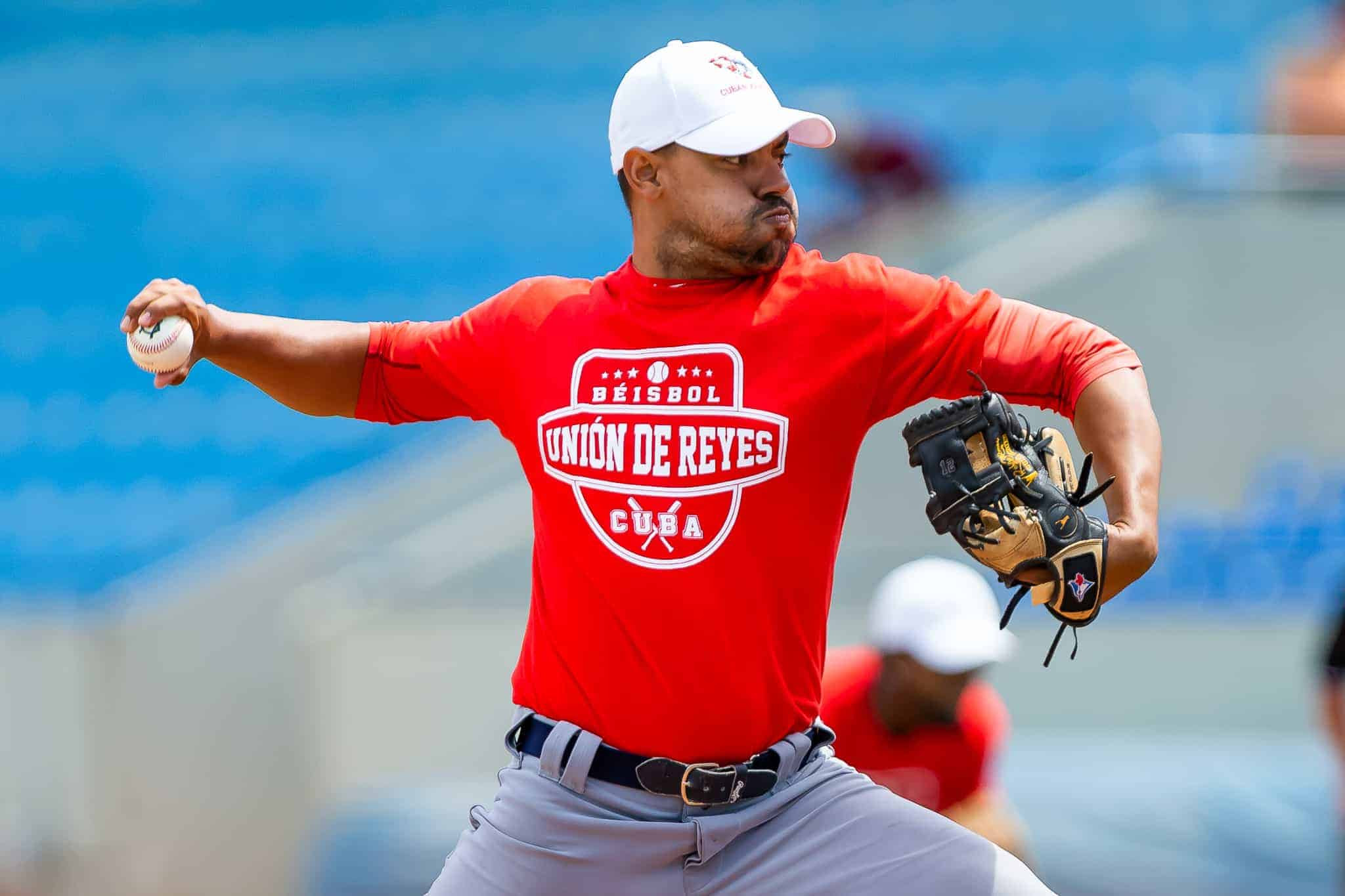 On the mound, Lefties starter Tyler Tan was a force against the high-flying Cubans. The Skagit Valley Product native would rack up seven strikeouts, and scatter only two hits over five innings on the bump.

Known for their flair and theatrics on the diamond, though, the Cubans didn’t go down without a fight in their return to Vancouver Island—receiving raucous applauses and cheers from the Victoria faithful with every hit or flashy play in the field. 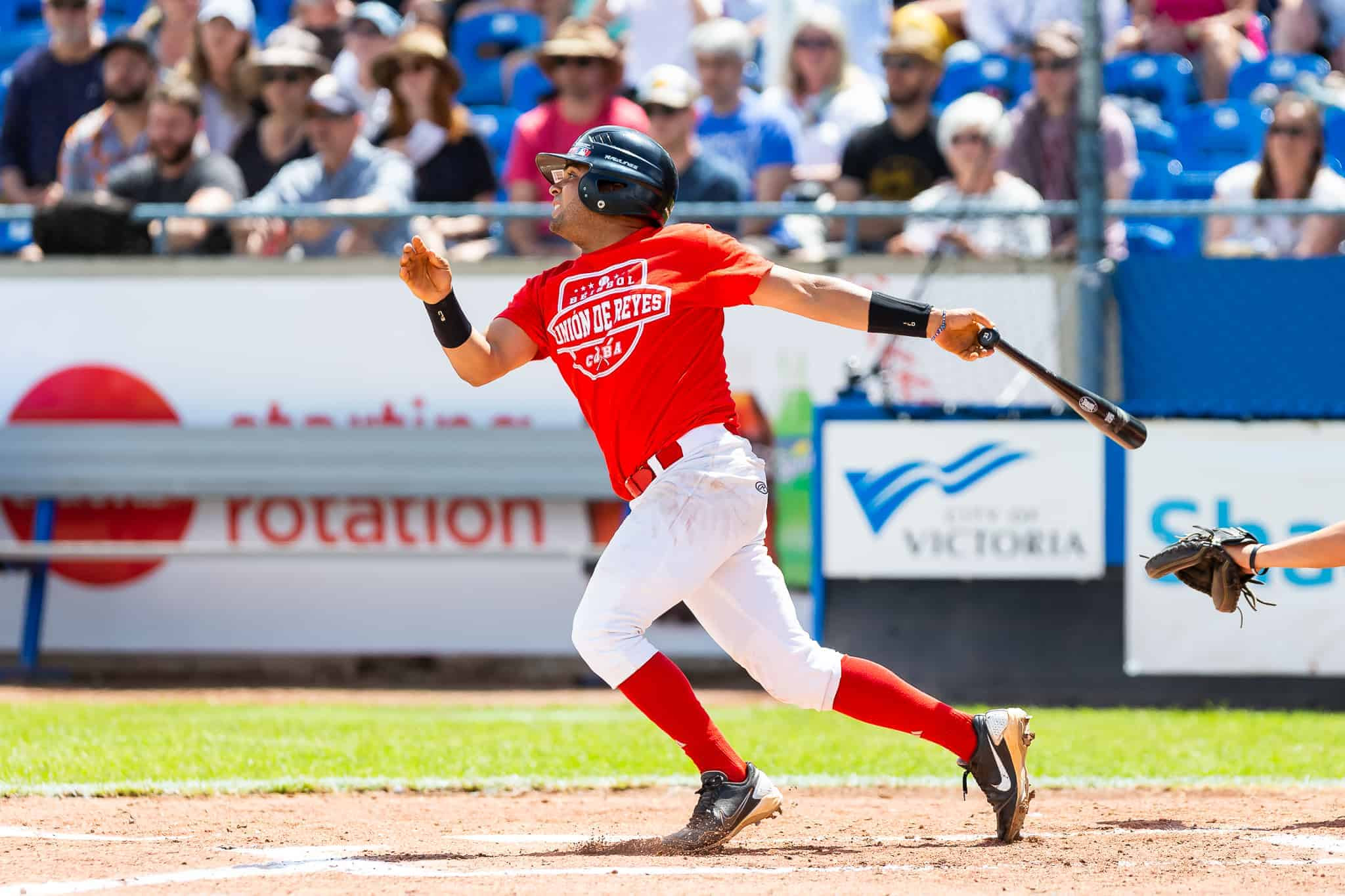 Union de Reyes brought the Victoria fans to their feet in the bottom of the sixth, as Jeovany Estavez smacked a hot shot through the hole in short to make it a 3-2 game and energized the crowd of just over 1,400. 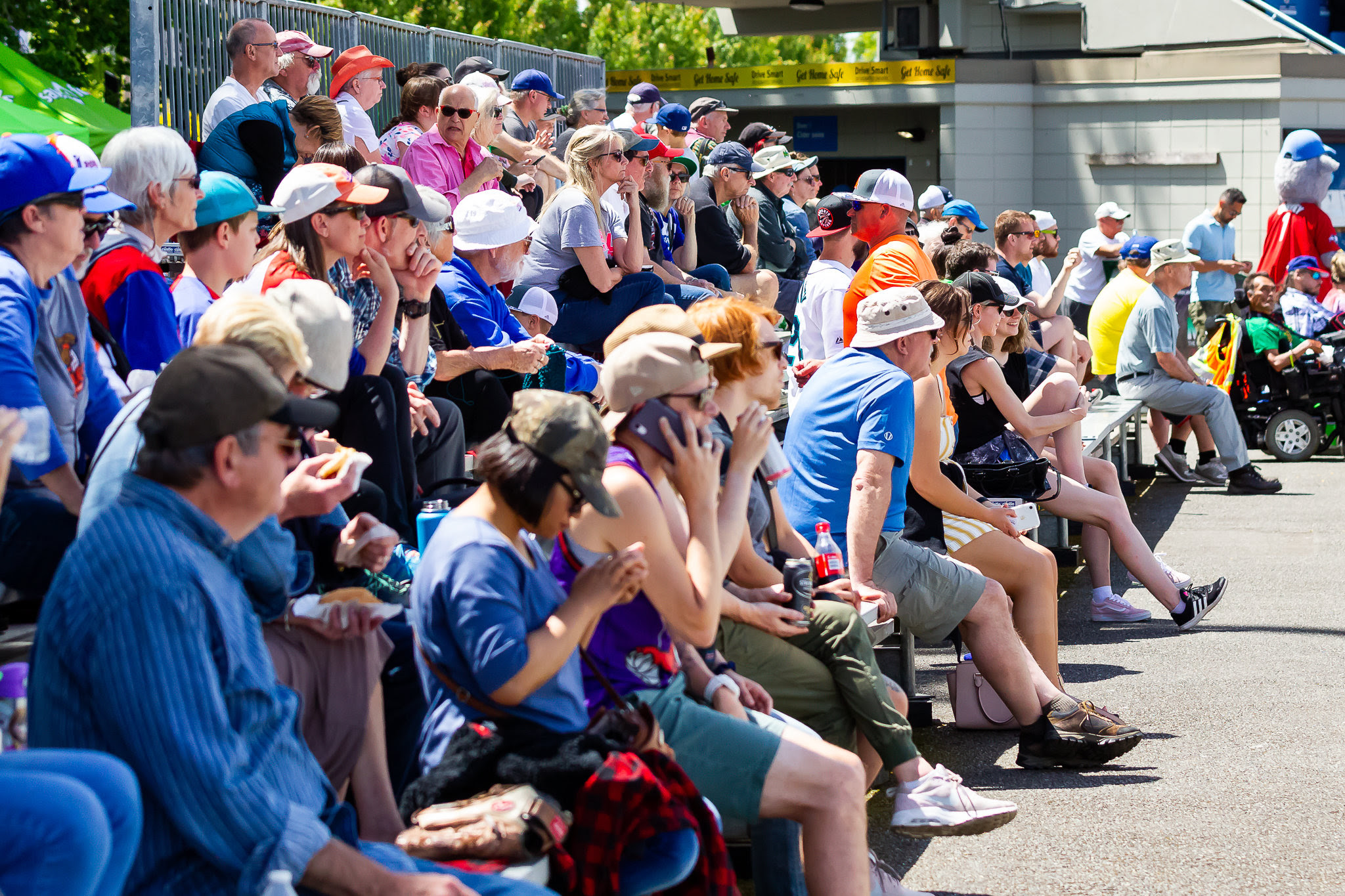 It was a beautiful day Sunday and a big crowd turned out to watch the Lefties defeat Team Cuba in the first game of the HarbourCats 2019 International Series (Photo: Christian J. Stewart)

The Lefties Justin Fugitt wouldn’t be deterred by Cuba’s rally in the sixth deter them, sparking a Port Angeles explosion in the seventh. Damiano Palmegiani’s two run single extended the Lefties lead to four which put them ahead for good, but Port Angeles added in five more in the ninth to clinch the victory. 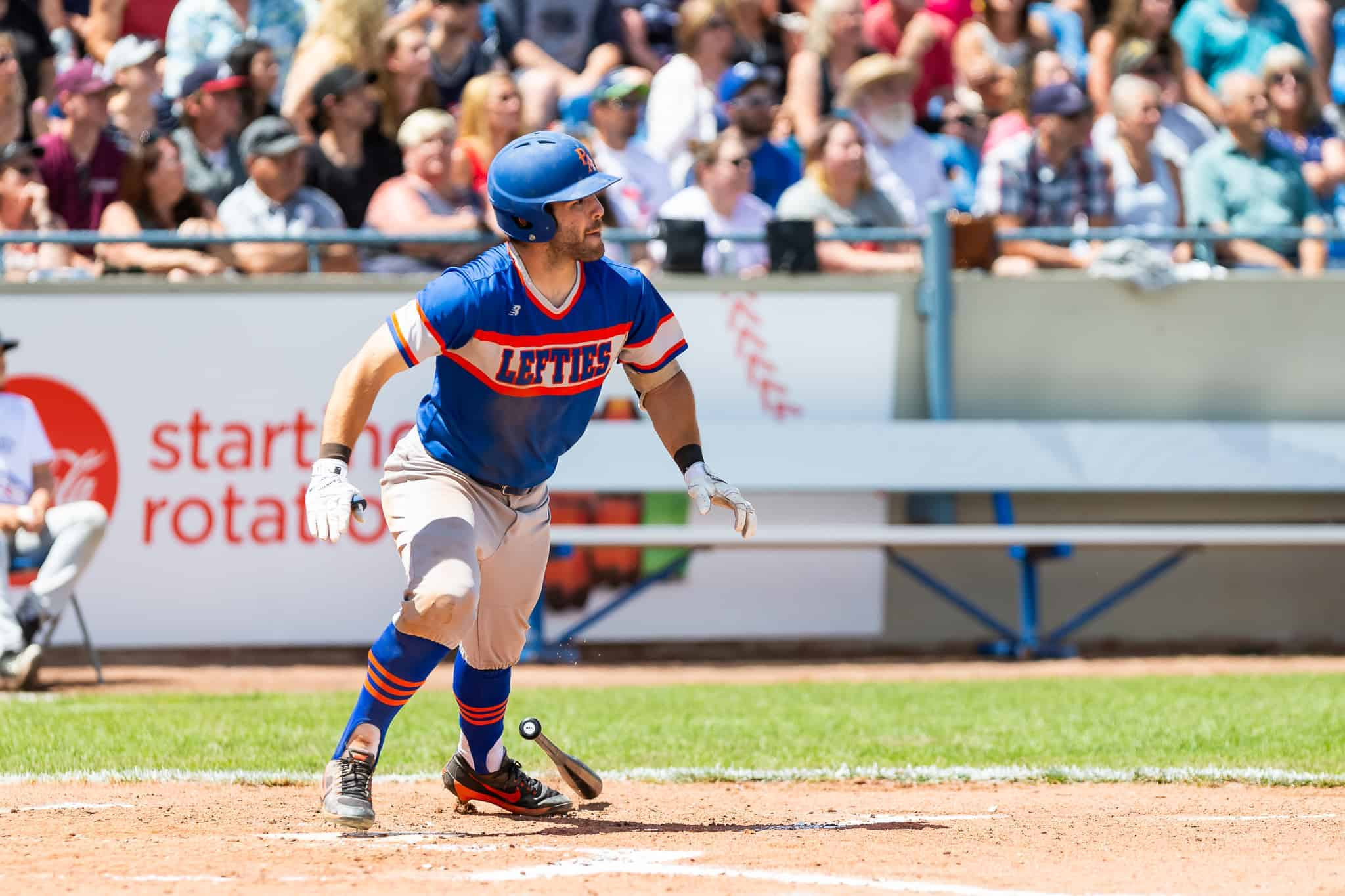