Team Canada will begin the tournament against Cameroon on the fourth day of action on Monday, June 10 at 3:00 pm ET (12:00 pm PT).

Canada is expected to have a strong presence in the tournament after qualifying with a second-place finish at the 2018 CONCACAF Women’s Championship back in October.

Christine Sinclair assembles the team after Canada went down 2-0 to England at the FIFA Women’s World Cup quarterfinals on June 27, 2015.

Here are some fun facts about the championship and answers to some of your most frequently asked questions:

What is Team Canada’s schedule?

The Women’s World Cup begins on Friday, June 7 and runs through Sunday, July 7. The first 14 days will feature round robin play within set groups.

The top two teams of each group and the four best third-placed teams will move on to the round of 16. Games featuring the remaining 16 teams will be played between June 23-25.

Quarterfinals are June 27-29, with semifinals on July 2 and July 3.

The third place playoff match will be on July 6, and the battle for the trophy will be played July 7.

Canada will be competing in Group E with the following schedule:

How can I watch Team Canada at the World Cup?

CTV and TSN are the official broadcaster of the tournament and will carry all of Team Canada’s games live in Canada. Check it out here.

This will be the third time that France will be hosting the Women’s World Cup. The first time was in 1938 with the most recent time being in 1998 where they won the title.

From the French team’s previous success hosting, there is a lot of anticipated enthusiasm from the home crowd at this years Women’s World Cup.

Who is on Team Canada’s roster? 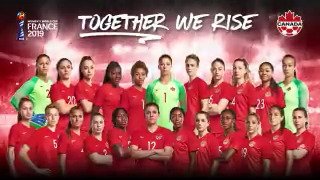 Does Canada have any Women’s World Cup experience?

This is the seventh consecutive Women’s World Cup (1995 to 2019) that Canada will be competing in. Sinclair will be making her fifth appearance at the FIFA Women’s World Cup, tying the national record by Karina LeBlanc.

Team Canada veteran Schmidt is making her fourth appearance, while Labbé and Scott are making their third appearances.

Of those rookies, Grosso, Huitema and Riviere are all 18 years old.

Will any records be broken?

Sinclair, Canada’s all-time leader and goal scorer, will be making her 5th appearance at the Women’s World Cup.

The Canadian fan-favourite is also only four goals away from setting a new international world record for goals scored. The current world record is claimed by the retired American soccer player, Abby Wambach with 184 goals.

Join in on the excitement as Sinclair chases history for lucky goal number 185.

Team Canada captain Christine Sinclair tries to keep the ball away from Team Mexico midfielder Karla Nieto during the first half of a women’s international soccer friendly at BMO Field in Toronto, Saturday, May 18, 2019. THE CANADIAN PRESS/Cole Burston

Janine Beckie is entering her first Women’s World Cup after not making the Canadian roster four years ago. Showcasing her perseverance and passion for the sport, she has become one of Canada’s biggest offensive threats and a player to watch during the tournament.

Are there any Olympians on the team?

In Rio, the women’s team became the first Canadian Olympic team to win consecutive medals at a summer Olympic Games.

Sinclair was not only member of both bronze medal teams but also was the team captain.

READ: Team Canada wins bronze at London 2012
READ: Back on the Olympic podium at Rio 2016

Where do the players play when not representing Canada?

Of the 23 players on the roster, all of the athletes play for various football clubs around the world including Sweden, England, United States, and France.

The Houston Dash have the most Team Canada players on their roster with total of four players.

How well has Canada performed at the FIFA Women’s World Cup in previous years?

After qualifying for their seventh consecutive Women’s World Cup, Canada is ranked top five going into their first match. Canada’s first appearance in the World Cup was in 1995, and since then Canada’s best achievement in the tournament has been shy of a medal with fourth place.

Looking forward, Team Canada is optimistic for a strong presence in this tournament as they are two-time CONCACAF champions (1998 and 2010) and finished second at this years CONCACAF qualifying tournament in October.

The Canada bench celebrates after forward Christine Sinclair (12) scored a goal against Panama during the second half of a soccer match at the CONCACAF women’s World Cup qualifying tournament in Frisco, Texas, Sunday, Oct. 14, 2018. (AP Photo/Andy Jacobsohn) SHE DID IT !! Christine Sinclair breaks world record for international goals