A former bat boy got the win for Victoria HarbourCats tonight, as Zach Swanson hurled five strong innings on the mound and the ‘Cats used a pair of rallies in the middle innings to defeat the Seattle City Showcase team 6-3 in the final game of the Greater Victoria Sport Tourism Commission International Series at Wilson Group Stadium at Royal Athletic Park

Seattle City, a baseball club founded in 2009 to develop young players, brought some of their best U18 players to Vancouver Island.

13 of City’s players have already committed to notable post-secondary schools in the United States such as UC Santa Barbara, the University of Washington, and University of Portland, and took an early lead in a showdown tonight with the HarbourCats. 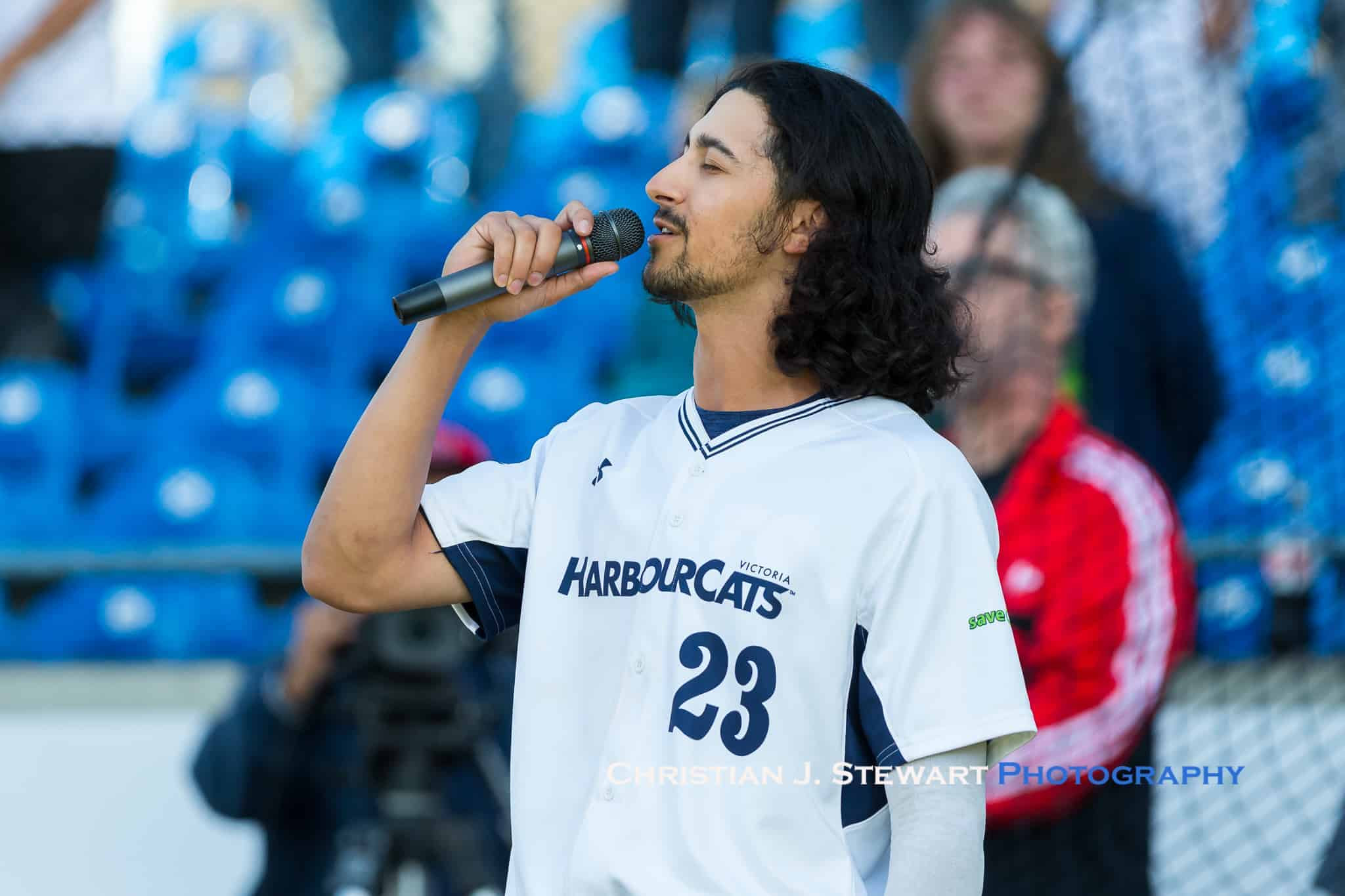 Two days after walking off Kelowna in a dramatic extra contest on Canada Day — the third walk off victory in less than a week— starting pitcher Zach Swanson pitched a 1-2-3 first, quickly got the first two outs of the second, but ran into some trouble trying to get the final out of the inning. 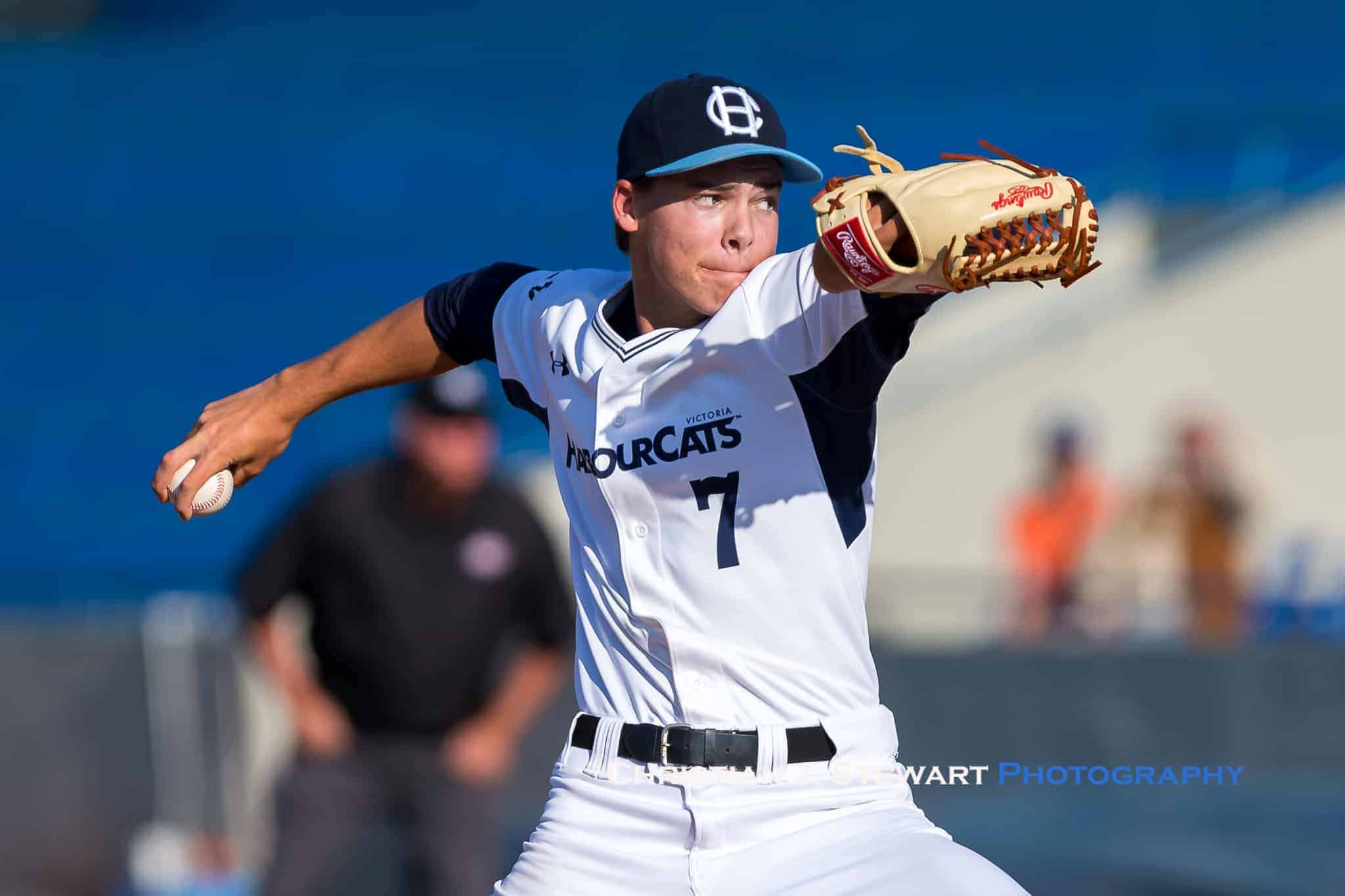 Righty Zach Swanson was effective in his first start of the season, collecting three strikeouts in five innings pitched on the mound. (Photo by Christian J. Stewart)

Jesse Brown got City’s first hit of the game with a single, and one batter later Peter Furia launched a two-out two-run homer over the left field wall to jump Seattle ahead by two.

In the home half of the inning, however, the HarbourCats began to claw back.

City starter Nestor German held Victoria scoreless in the first, but Nick Adams got the ‘Cats in business with a one-out single in the second. After Adams advanced into scoring position by stealing second, Matt Clayton got Victoria on the board with a RBI double to right field. 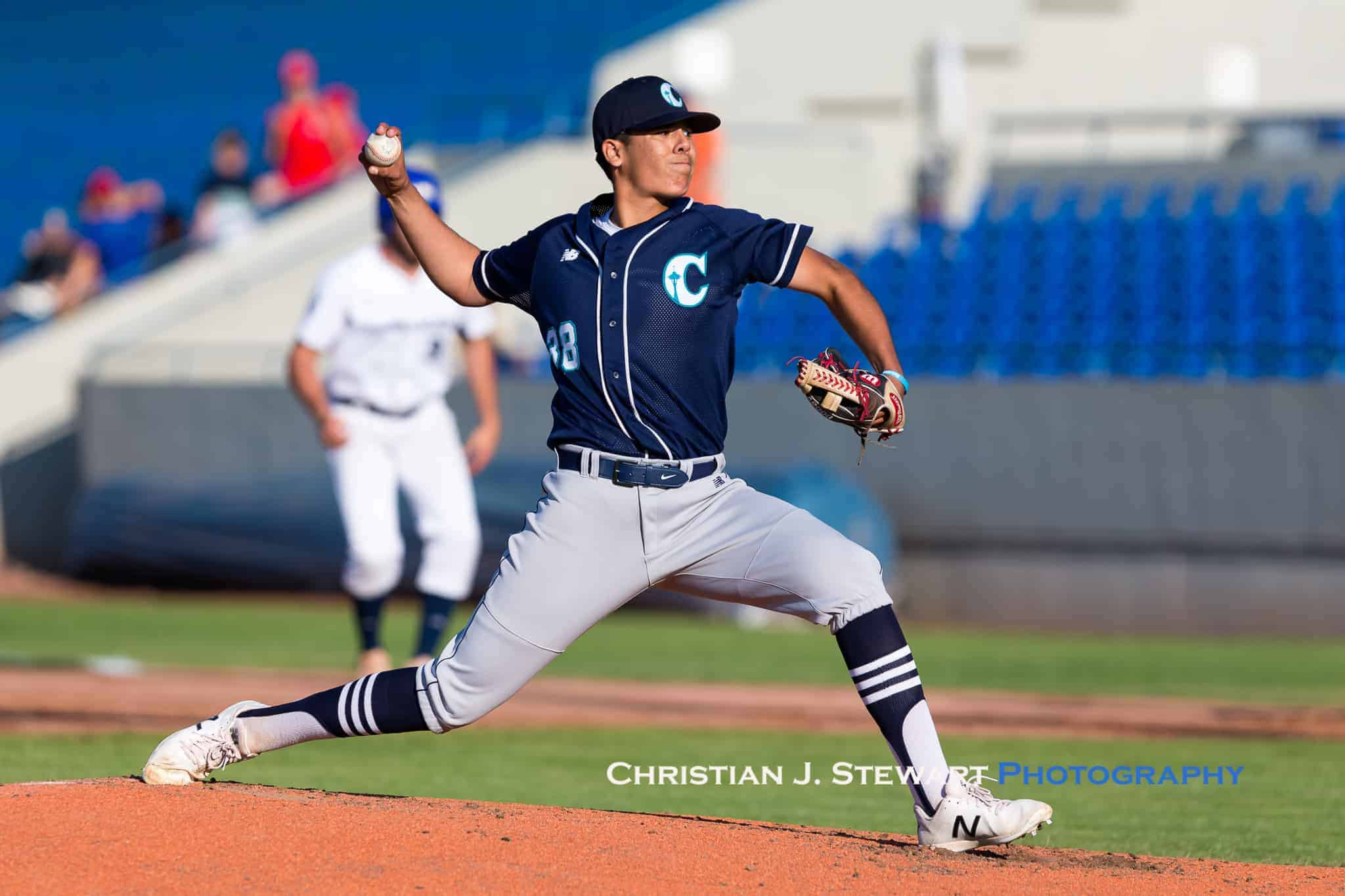 Seattle City Nestor German did his part to keep Seattle in the game, allowing only two earned runs in just over four innings pitched. (Photo by Christian J. Stewart)

Clayton would continue the ‘Cats dominance on the base paths by stealing second one batter later, while Matt Turner got on base with a walk to give Victoria another scoring position. However, German got out of the jam without any more damage with back to back strikeouts.

In the top half of third Swanson would retire the side in order with two strikeouts, and in the home half received some run support in the home half. After Chase Meidroth led off the frame with a single, he advanced to second on an error, Tyson Hays levelled the game at two with a fielder’s choice. Tanner Rempel prepares to launch out of the box and sprint to first earlier in the game. Rempel scored a run, and had a walk on the night. (Photo by Christian J. Stewart)

The game remained tied until Swanson exited in the fifth — allowing three hits and two runs in his first start of the season, the only blemish being the two-run homer in the second — when Ty Schindel gave Victoria their first lead of the night.

Schindel smacked a one-out single, and scored one batter later when Meidroth launched a RBI single to the outfield that made it 3-2 game and chased German from the game. The righty, who will graduate from high school next year, scattered six hits and allowed three runs (two earned) in 4 1/3.

The HarbourCats added some insurance with a run in the sixth, and blew the game open with two more runs one inning later—highlighted by a pair of back to back RBI base hits from Tyler Pettit and Harrison Spohn in the seventh.

Matt Turner slides into second, avoiding the tag from a City infielder, and snagging a stolen base in the early innings. (Photo by Christian J. Stewart)

Victoria will return to WCL regular season play Friday night in the final series of the First Half against the Bellingham Bells. The series will effectively determine the North Division first-half champion, as coming into tonight’s game, the Bells trailed the HarbourCats by two games for first in the North.  Depending on the outcome of Bellingham’s games in Yakima tonight and tomorrow, the ‘Cats might look to clinch their third postseason berth in four years by winning on Friday, or by taking two of three games from Bellingham.

Before arriving in Vancouver Island, Bellingham will play the final two games of a series in Yakima Valley against the Pippins tonight and tomorrow evening. First pitch for the crucial weekend series is slated for 6:35p.m.

Cats win with a walk off hit in the 10th Cuba, USA, Canada to gather on opening week of the season

VICTORIA MAVERICKS TO PLAY FOR GOLD