Elsewhere around the Campania region, the Canadian water polo team fell 15-7 in the first of two semifinals Friday night and will play for bronze Saturday, while the tournament came to a close for women’s soccer, and a taekwondo medal hopeful went down in the quarter-final round.

At Naples, as the laps wound down Hutchinson moved from fourth, to third, to second as the bell rang for the final lap. The West Vancouver native was able to pull away from her challenger for second place, mining silver in a time of 15:48.06. It’s Canada’s first silver medal of the Games and the second of the meet for the track and field team after Sarah Mitton’s gold medal performance in the shot put a night earlier. 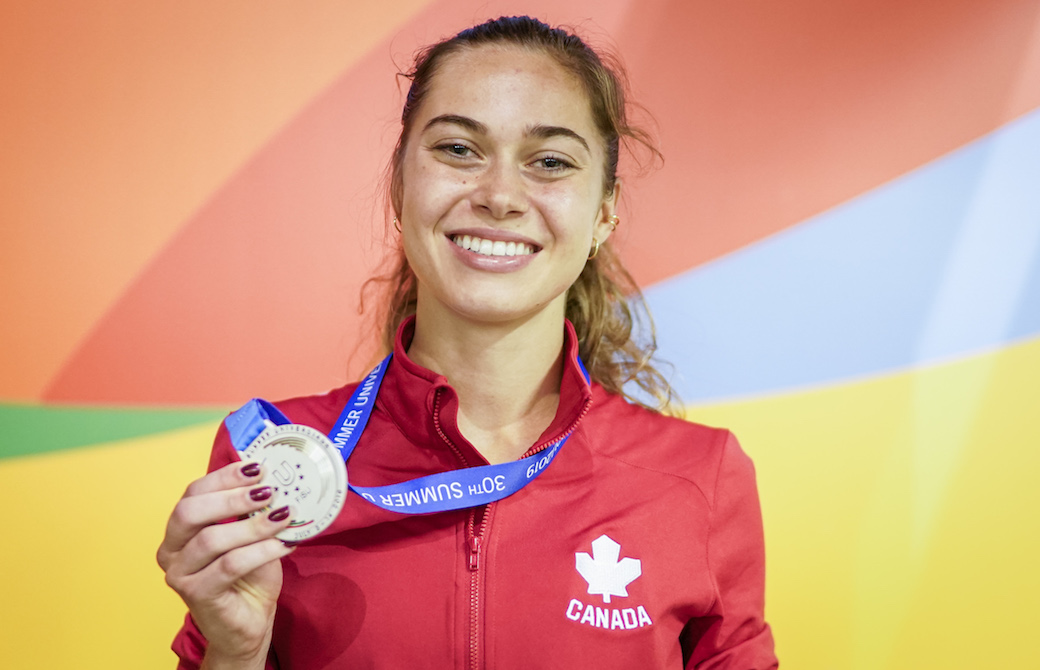 “I was feeling pretty confident going into the race, I knew I could be up there with some of the top girls,” said Hutchinson. “I just wanted to kind of sit in the race near the front and make sure that I didn’t miss the move and that I was ready for it to happen.

“I was feeling good the entire race, so when she went I tried to go with her for as long as I could and hold on.”

Canada’s other top medal chance at San Paolo Stadium Friday was in the men’s 3,000-metre steeplechase, where Jean-Simon Desgagnés and Ryan Smeeton had qualified second and third, respectively, in the preliminaries. In the final, Desgagnés ran 8:36.20 to finish just off the podium in fourth, with Smeeton right on his heels in a time of 8:40.00. 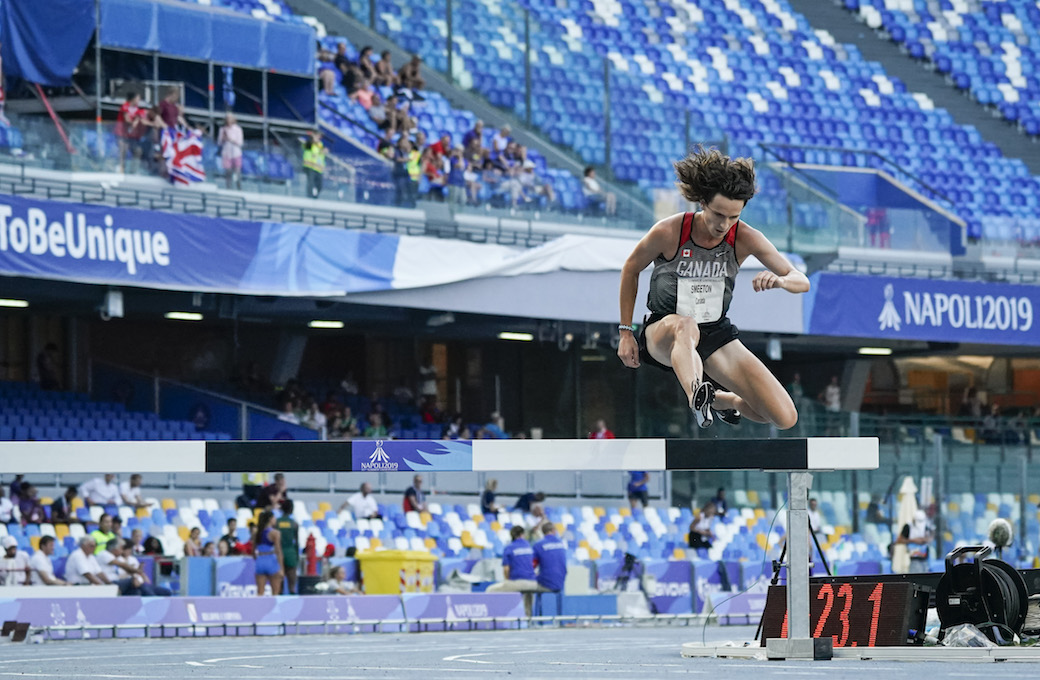 “I’m really happy, it’s a big competition,” said Laval’s Desgagnés, who was the U SPORTS cross country Rookie of the Year in 2017. “Fourth place is a little heartbreaking because the medals are so close but without saying that, I reached my primary goal, I learned a lot from this race.

“In a championship race, you would think there (would) be some strategy, and today it was totally the opposite. The race started extremely fast, at a pace that only two or three guys had already maintained in the past. The goal was to be ready for any scenario and I thought I answered well. I thought it was going to slow down a bit but it didn’t really.”

The other Canadian finalist on the fifth night of athletics competition was Chanell Botsis in the women’s hammer throw. She finished ninth, with a top effort of 60.16 metres.

In the men’s 110-metre hurdles, Joey Daniels failed to qualify for the final with a time of 14.15 in the first semifinal. Shane Moffo, running in the second semi, fell on the final hurdle and finished well back. And in the morning’s long jump qualifications, Canada’s Jesse Thibodeau missed out on qualifying for the final, with his leap of 7.56 metres, just three centimetres short of the cutoff. 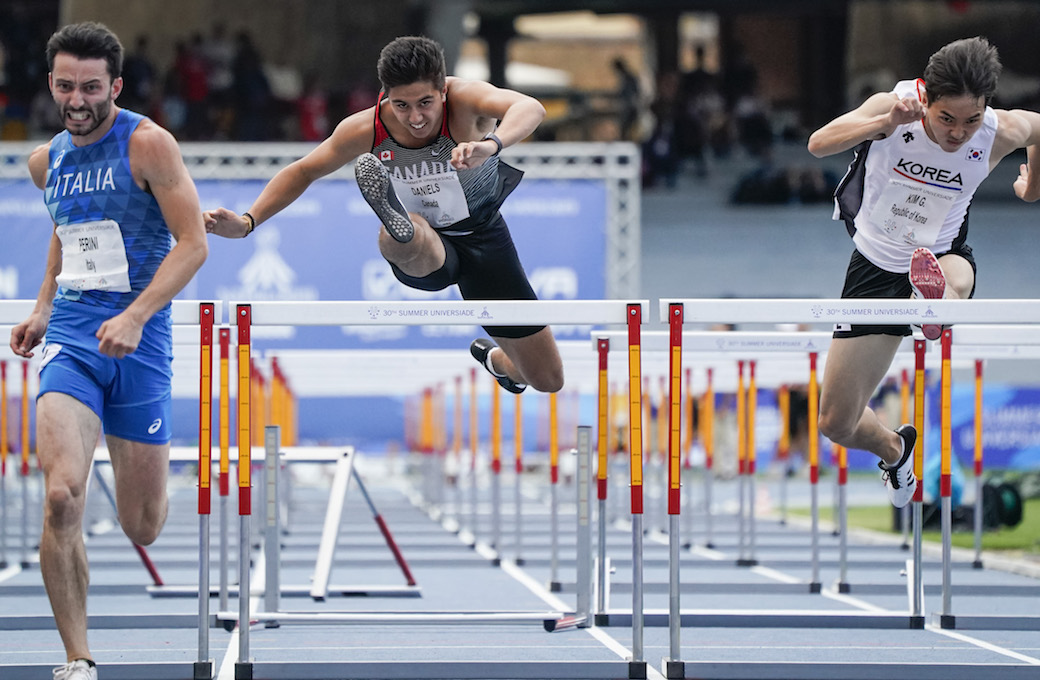 Canada’s final event of the night was the qualifier in the women’s 4 x 400-metre relay, with the team of Zoe Sherar, Jenna Westaway, Maite Bouchard, and Maddy Price easily winning their preliminary heat in a time of 3:33.24. The Canadians enter Saturday night’s final with the top qualifying time in the eight-team race.

At Naples, the Canadians fell 15-7 in their semifinal to a strong Italian side that was bolstered by a packed crowd at Piscina Scandone in Naples on Friday.

“I give credit to the Italians as they were well prepared and we saw what we were expecting,” said Canadian head coach Cyril Dorgigné after the loss. “We didn’t execute exactly what we should have done.”

“We are not used to this atmosphere. We have a young team and this kind of event with so much pressure, plus the crowd plus Italy playing at home, well, we didn’t step up our game enough to be able to compete with them and try to win.”

For the opportunities Canada had to attack the goal, Italian goalie Fabiana Sparano was outstanding. Sparano made 11 saves, while her team in front of her did their part to provide several field blocks. Canada’s Daphné Guèvremont scored three goals for Canada, while Italy out-scored Canada 11-3 in the first half.

At Pagani, Canada capped off their 2019 Universiade campaign with a 5-2 loss to a strong Italian team Friday at Municipal Stadium Marcello Torre.

The Canadians, who played five matches over the last 10 days, match their eighth-place finish from the 2017 FISU Games in Taipei.

“As always this was an incredible opportunity to represent Canada,” said Canadian head coach Peyvand Mossavat. “I think this was probably the most competitive tournament I’ve seen over the last three cycles. I think we might be disappointed from a results perspective but from a growth and opportunity perspective I think it was fantastic for everyone, including us as coaching staff. Hopefully our kids will take this back into their own environments and make our leagues in U SPORTS better.”

The Italians wasted no time, scoring off of a header in the third minute and then doubling their lead in the 11th minute. Jessica Bunker of Laval University got Canada on the board in the 28th minute but the hosts took a 2-1 lead entering the half.

Italy scored another two quick goals out of the break, the first in the 50th and the second off a free kick in the 55th minute. University of Guelph standout Victoria Hinchcliffe cut the deficit back to two off a penalty kick in the 86th minute but Italy answered back with a late marker to round out the win. 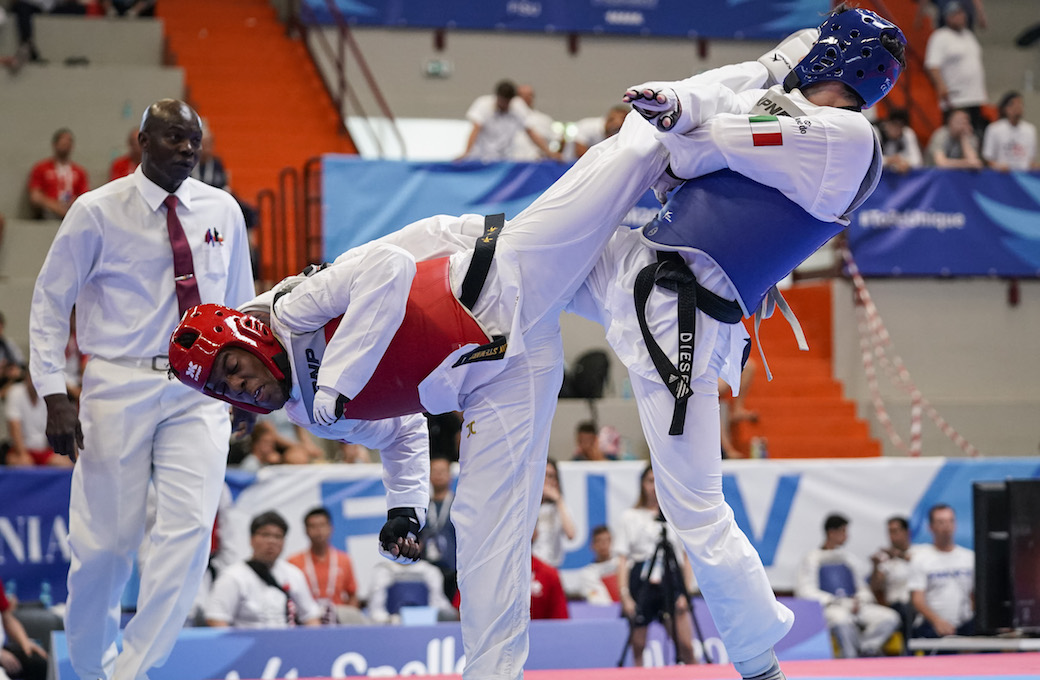 At Casoria, Jordan Stewart earned a fifth-place finish in the men’s 87kg class. The Humber College student entered the competition in the Round of 16 and, after trailing 10-8 heading into the third round, came from behind to defeat Italy’s Matteo Marjanovic 14-11.

Stewart then met South Korea’s Inho Park in the quarter-final round, suffering an early 6-0 deficit before falling 8-3.

Fellow Canadian Jackson Carroll of Saint Mary’s University placed ninth in the men’s 63kg category. The native of Halifax defeated Romania’s David Muresan 12-6 before falling to Egypt’s Ahmed Nassar 17-7 in the round of 16.

Viviane Tranquille was also in action Friday, falling 19-13 to Mongolia’s Namuun Boldbaatar in the round of 32.

Seth Friesen was the top Canadian in attacks with 11 kills. Teammates Mason Metcalf and Warren Taylor each had three blocks.

The Canadians will complete their tournament by playing a seventh game in eight days on Saturday at Benevento, as they face Brazil for the 11th spot at 6:00 a.m. EDT / 3:00 a.m. PDT (12:00 p.m. local time). Brazil won 3-1 over Canada in the group stage. The men in Red and White could tie their 11th-place finish of the 2017 Summer Universiade in Taipei.

At Naples, Alexandra Chtrevenskii wrapped up the individual all-around competition by placing 20th in the ribbon with a score of 13.550 points and 24th in the clubs routine with 12.750 points.

The Concordia University student placed 23rd in the all-around event with a combined score of 53.10 points.