VICTORIA — The Victoria HarbourCats (13-5/31-14) used a six-run rally in the eighth to come from behind and stun the Cowlitz Black Bears 7-3 and record their fourth series sweep of the season Thursday afternoon at Wilson’s Group Stadium at Royal Athletic Park.

With the victory, the HarbourCats also moved a full game ahead of the Wenatchee AppleSox for first in the WCL Second Half North division standings. 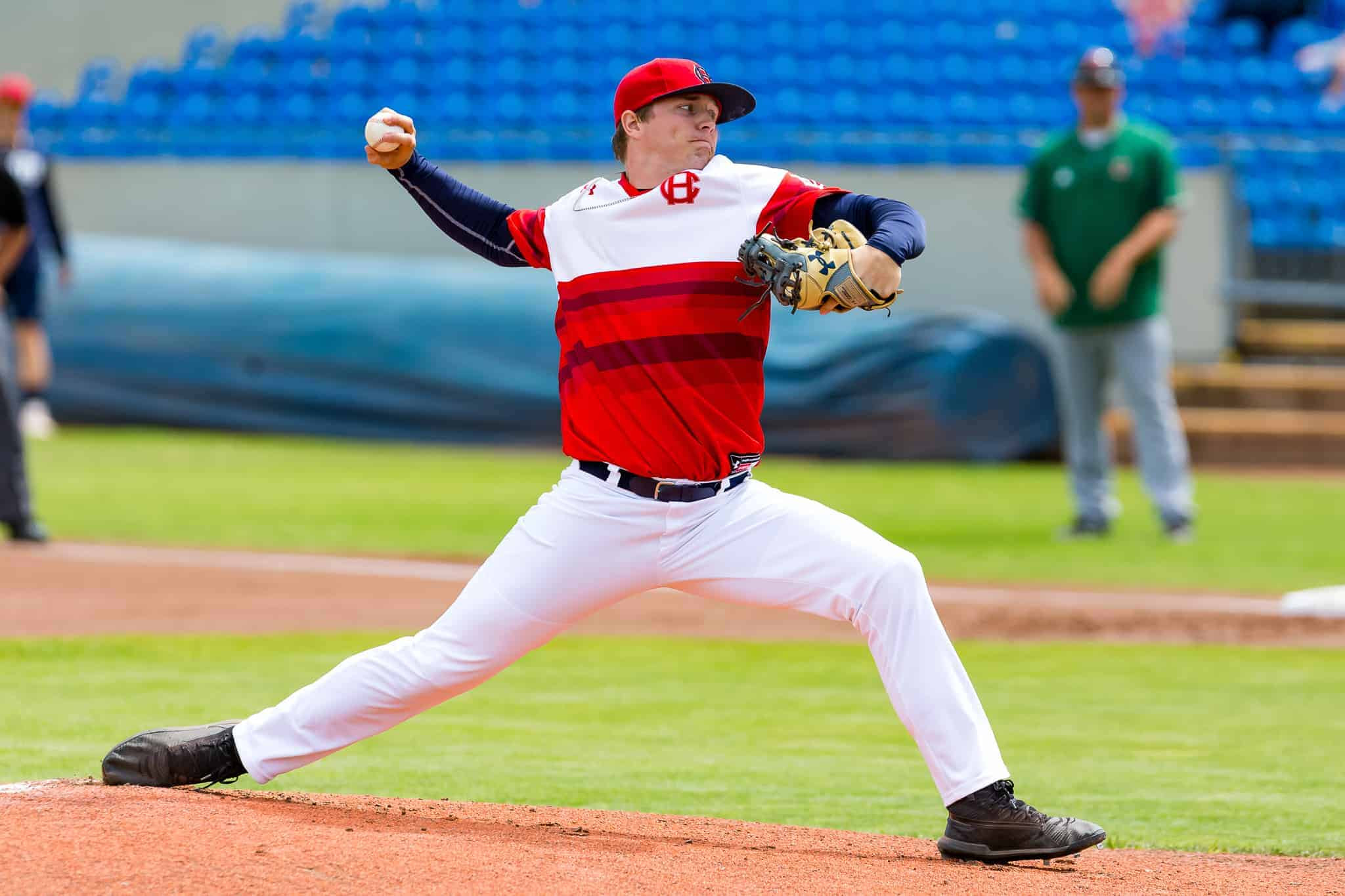 Dakota Hawkins was dominant in his fourth start of the season, scattering just four hits over six innings. (Photo by Christian J. Stewart)

In the rare midweek matinee, Andres Sosa, batting leadoff for the second straight game, looked to go deep to start the game for the third time in the series.

Sosa homered in the top half of the first Tuesday night while batting second in the order, and launched another homer last night to start the game — that time from the leadoff position. In today’s matinee, Sosa slammed the second pitch of the game from Dakota Hawkins over 300 feet to centre field. However, the ball stayed in the yard, and Dakota Hawkins retired the side to give Victoria their first clean opening inning of the series. 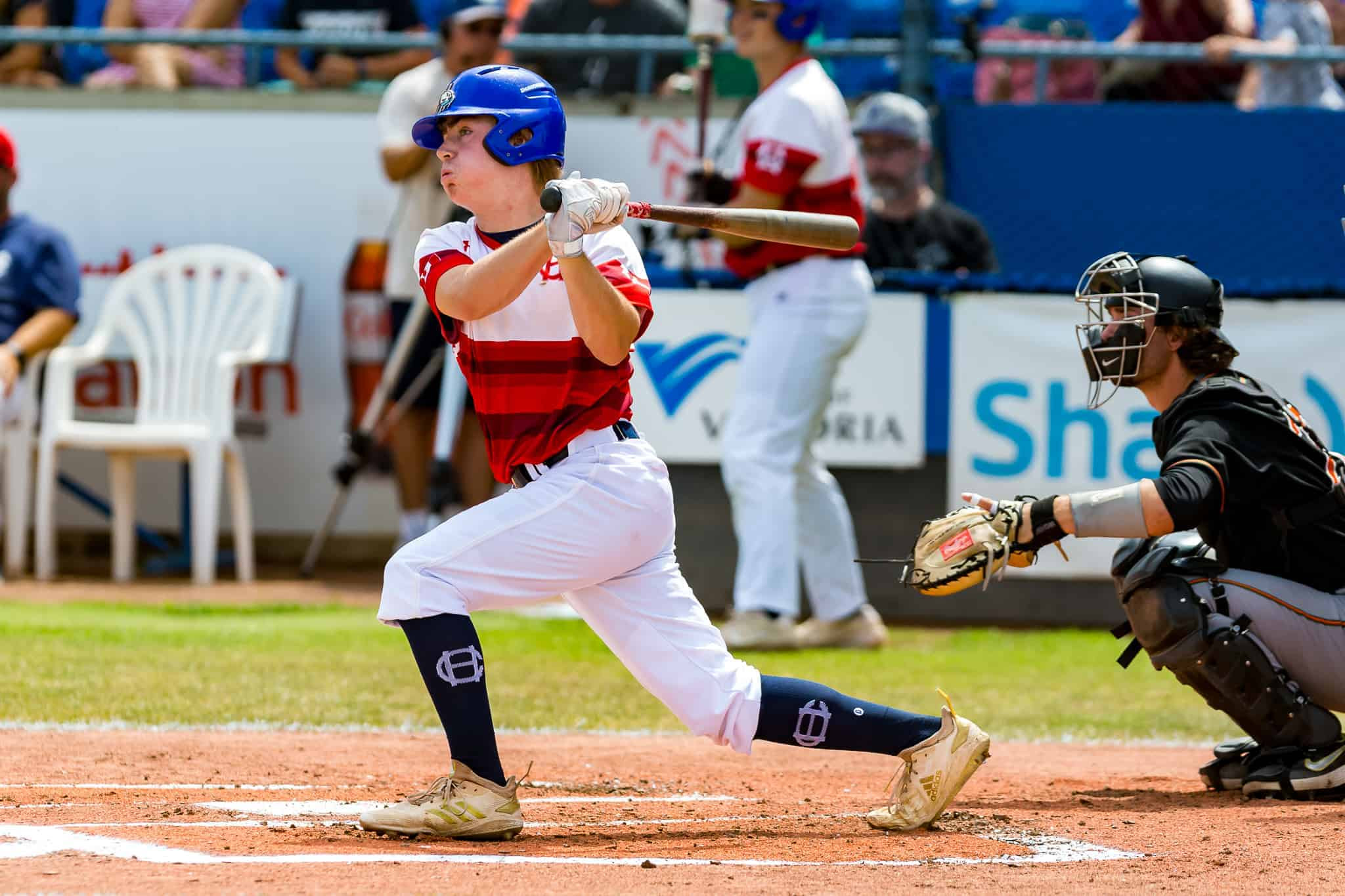 Chase Meidroth extended his hit streak to seven with this hit earlier in the afternoon contest. (Photo by Christian J. Stewart)

In the home half of the inning, last night’s hero in Victoria’s 5-4 walk off victory, Chase Meidroth extended his hit streak to seven with a one out single. The University of San Diego product would steal second to get into scoring position, but with two outs Griffin Paxton lined out to end the threat.

Jacob Rutherford, making his second start of the season for Cowlitz, did his part to keep a potent HarbourCats lineup quiet.

The righty retired eight straight batters entering the fourth, and would get Meidroth to pop out and extend that streak to nine. Frankie Niemann and Griffin Paxton, however, finally got to the right hander by hitting back to back singles that put two men on base for the first time in the game for the ‘Cats. 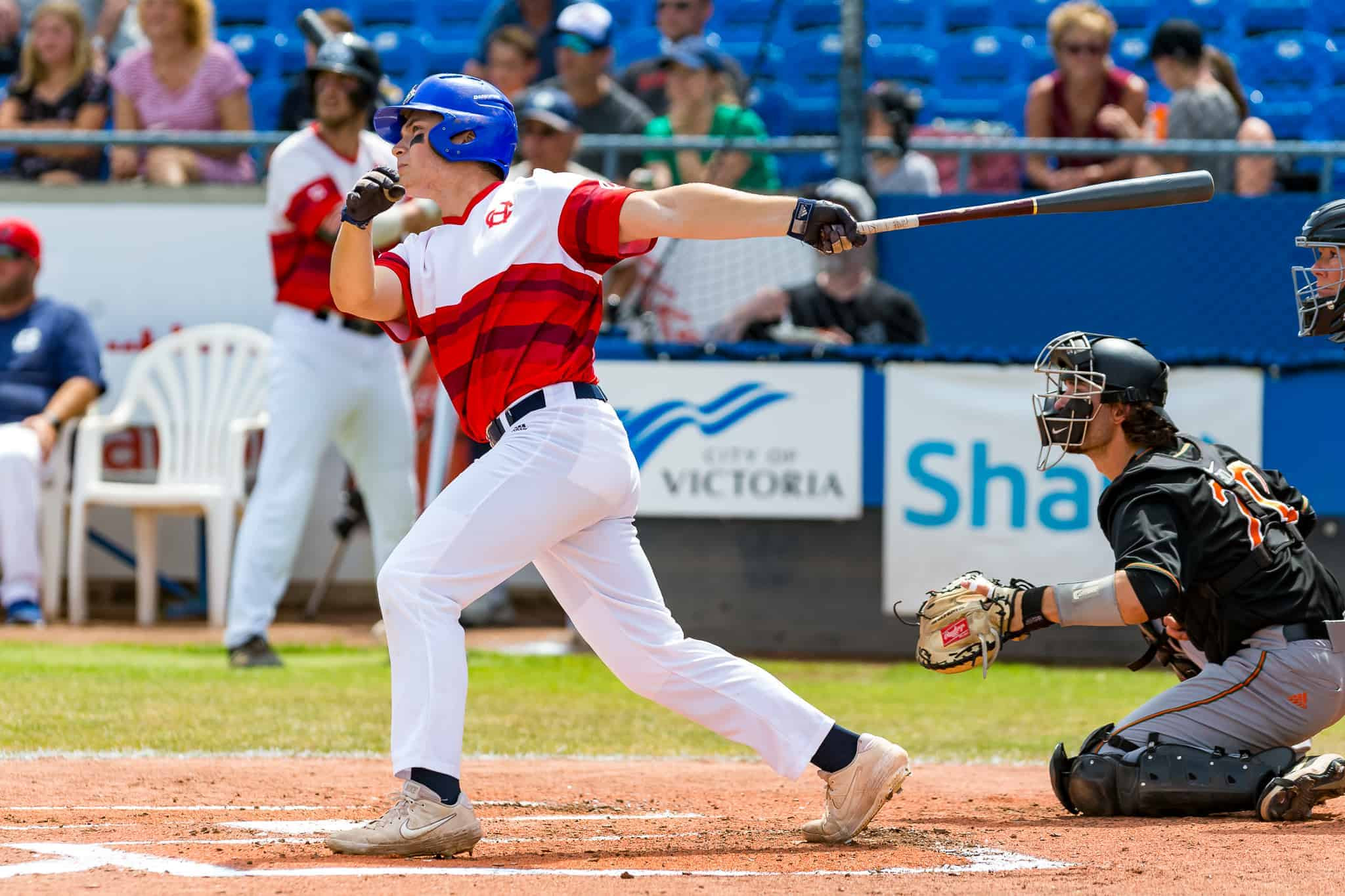 Unfazed by the singles, Rutherford got Emilio Nogales to fly out and Matt Clayton to ground into a fielder’s choice to keep the game scoreless.

On the opposing hill, Hawkins was cruising, having allowed just one base runner through the first four innings. In the fifth the righty allowed a two out walk to Zack Smith — the Black Bears second base runner of the game — and the short stop stole second, but Hawkins got Sam Ireland to ground out and end the threat.

Cowlitz finally got the HarbourCats starter one inning later. 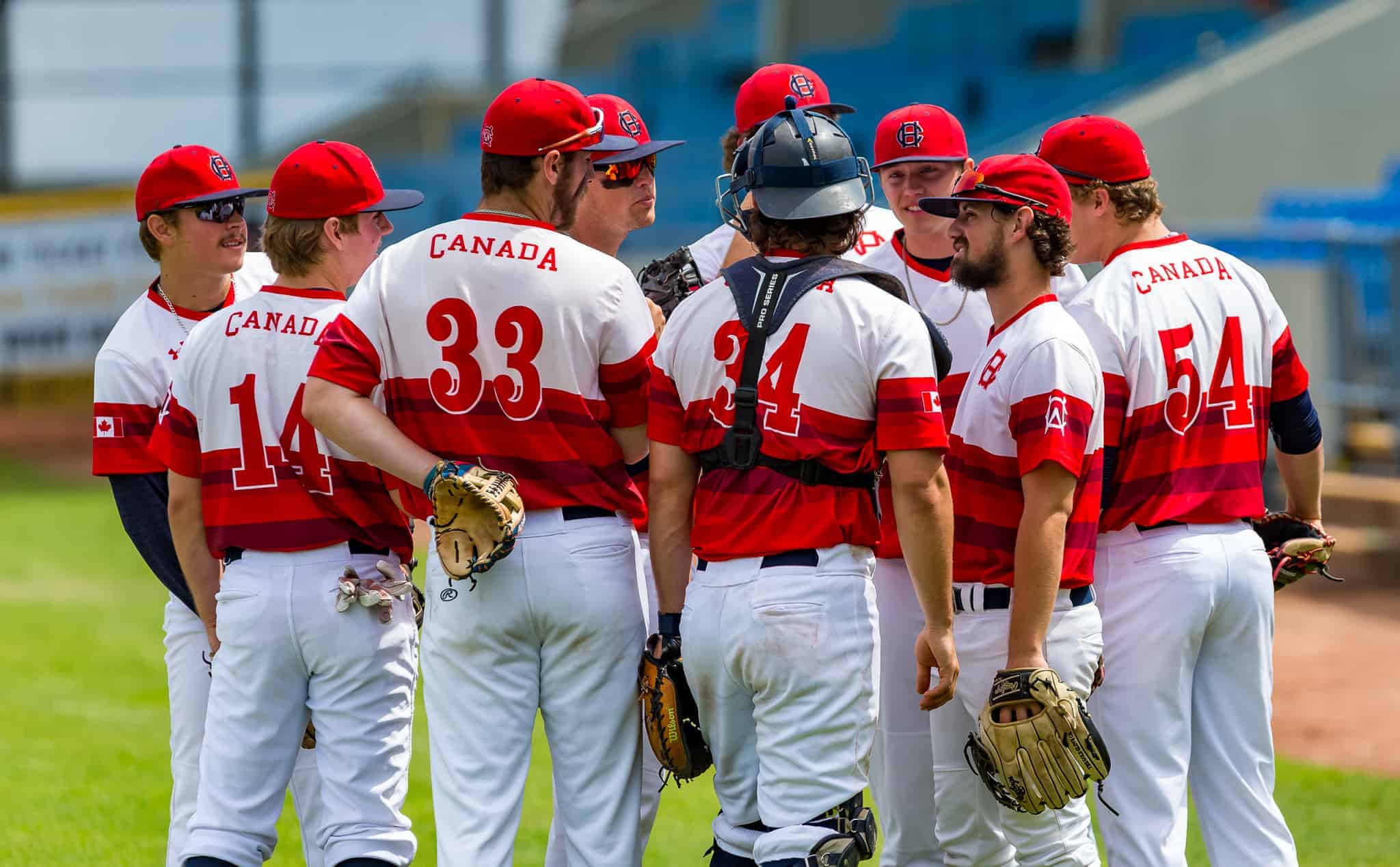 The ‘Cats gather before the game to discuss strategy in hopes of sweeping the Black Bears in the matinee. (Photo by Christian J. Stewart)

Heath Pickhardt got Cowlitz’s second hit of the game with a leadoff single, and two outs later Brady Cromwell smacked a single to put two men on for the Black Bears for the second straight inning.

Cowlitz finally capitalized off Hawkins when Cody Eager scored both runners with a two out RBI double to the wall in left field, giving the Black Bears a 2-0 advantage. Hawkins exited after the sixth, tying his longest outing of the season, scattering two hits over six innings and giving up just the two runs on the afternoon.

In the home half of the inning, Nate Pecota brought the crowd to their feet with a leadoff home run to cut Cowlitz’s lead in half. 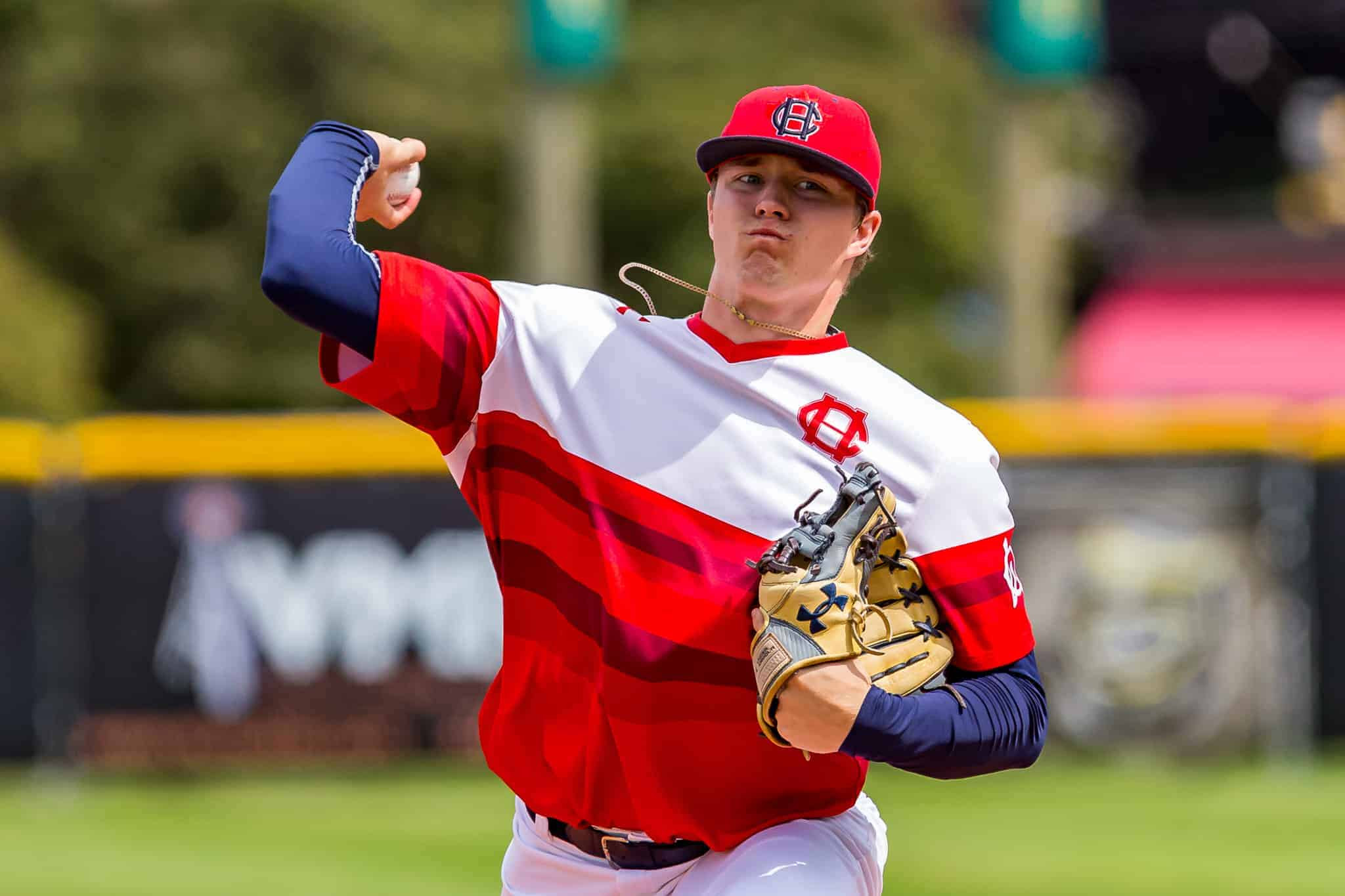 Hawkins flexes his face and throws a pitch to the mound earlier in the game that turned out to be a pitcher’s duel before Victoria came alive in the eighth. (Photo by Christian J. Stewart.

The Black Bears added a run in the seventh, but the ‘Cats came alive off Black Bears receiver James Sashin in the eighth

Pecota and Meidroth both notched their second hits of the game to put runners on the corner for Victoria, and Frankie Niemann hit a deep fly to right that bounced off the glove of the Brian Cromwell and allowed Pecota to score to make it a one run game. 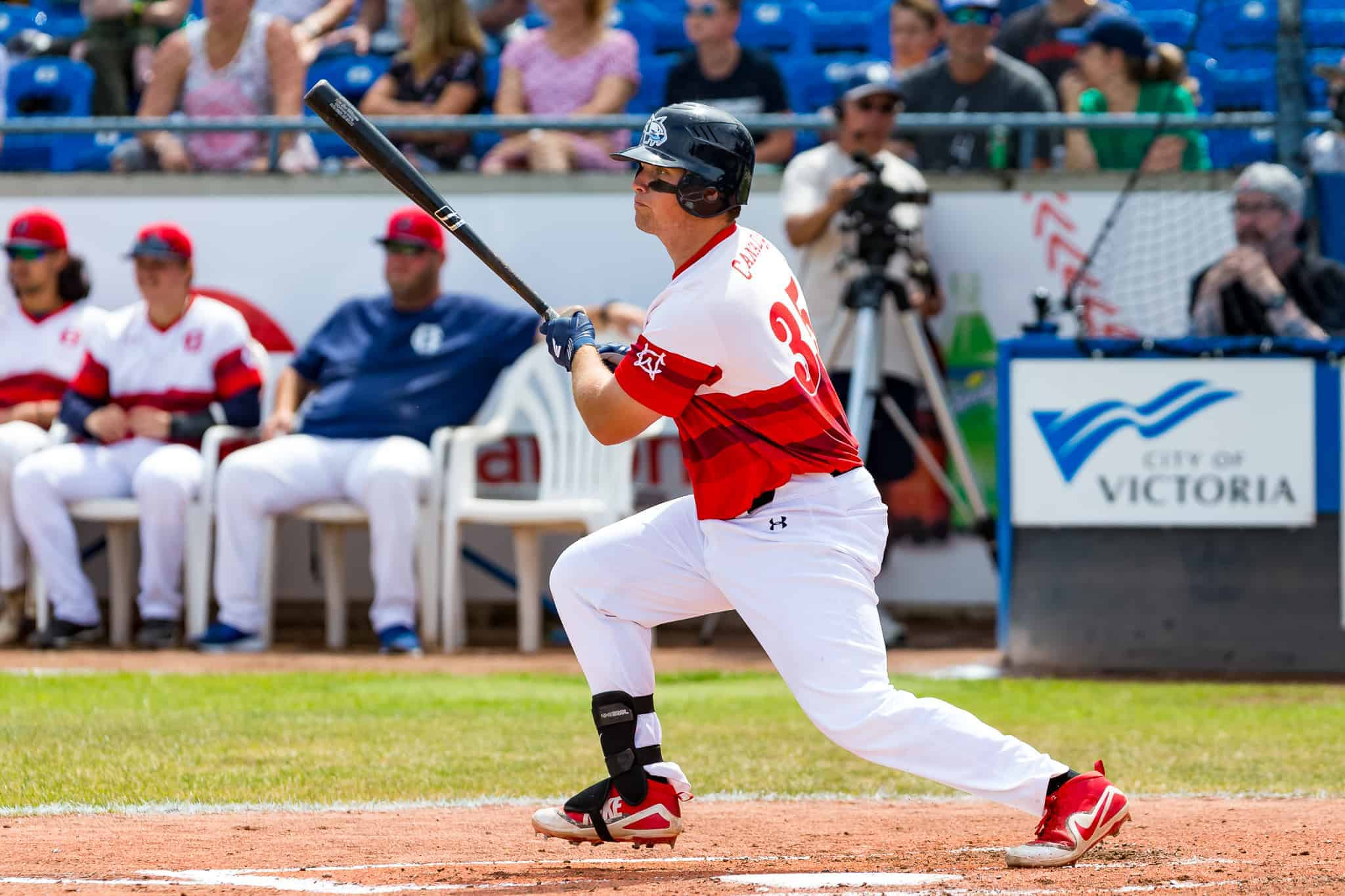 Meidroth also advanced to third on the error, as Griffin Paxton continued the rally with a RBI single off new pitcher Rance Pittman to tie the game. Fynn Chester was summoned out of the bullpen to pinch run, and scored on a wild pitch one batter later to give the HarbourCats their first lead of the game. The ‘Cats then poured it on to put the game out of reach, highlighted by a two-run homer from Matt Clayton that made it 7-3.

Derek Salata, who came into the game in the seventh, retired the side in the ninth to clinch the sweep for Victoria.

The HarbourCats will now hit the road for a week, travelling to Bellingham and Port Angeles, before returning home August 9th for the final home series of the season against the Lefties.