The Victoria HarbourCats (20-6/38-15) slammed six home runs en route to a 7-4 victory over the Port Angeles Lefties Saturday night at Wilson’s Group Stadium, and tied a season-high with their seventh consecutive win.

One night after becoming the first WCL team to score more than 400 runs in a single season, the HarbourCats offence set another league record tonight. In a game with seven combined home runs, Victoria’s six long balls gave the ‘Cats 53 home runs on the year—another WCL single season record. 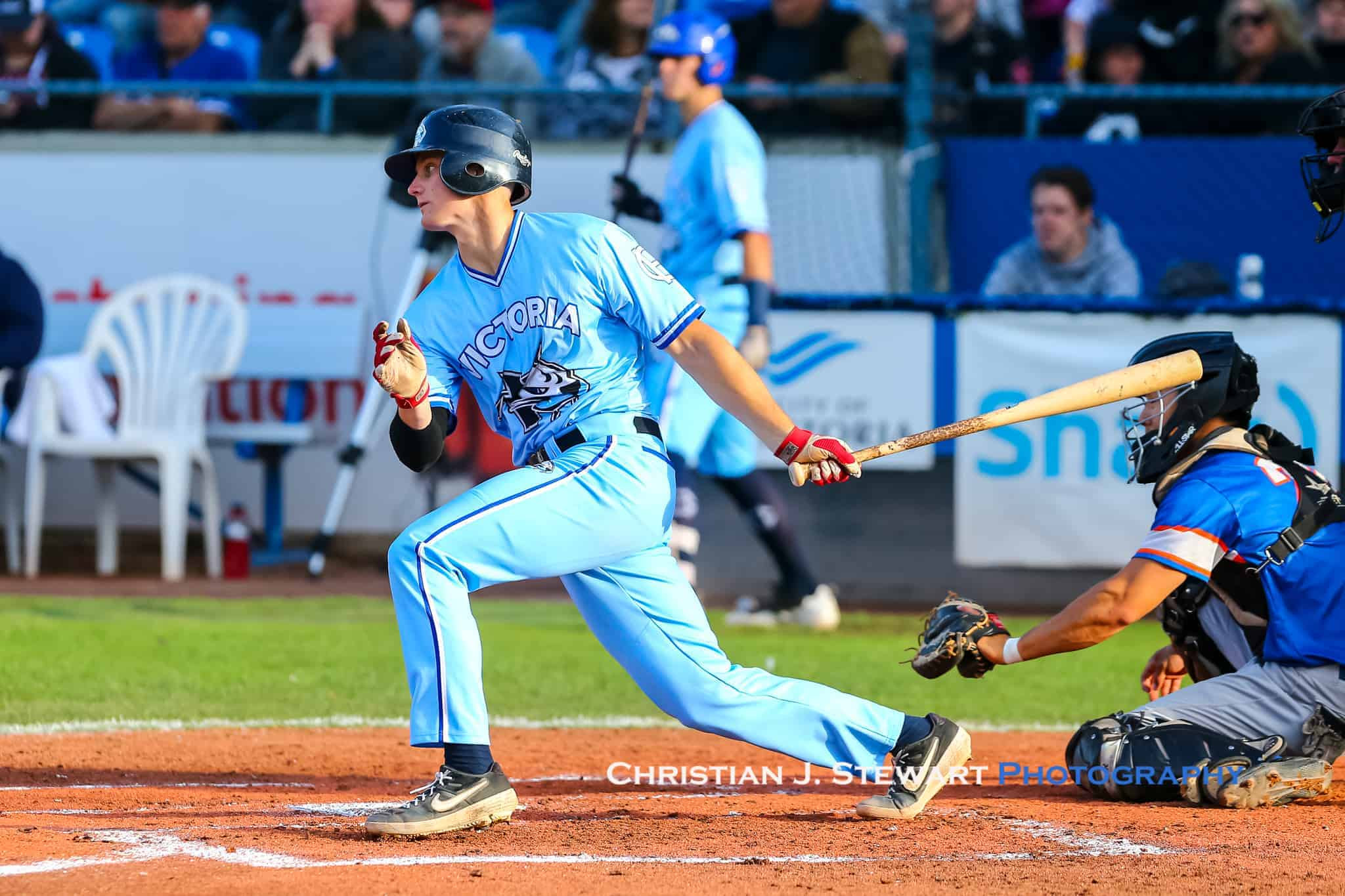 After scoring 21 runs yesterday the HarbourCats didn’t wait long to bust out their big bats tonight.

Lefties starter Tyler Tan would retire the first two ‘Cats to start the first, but Griffin Paxton launched a solo home run to right to get Victoria on the board first. After not hitting a home run in the first two months of the season, the infielder from Texas-San Antonio has hit four long balls in the past four games. 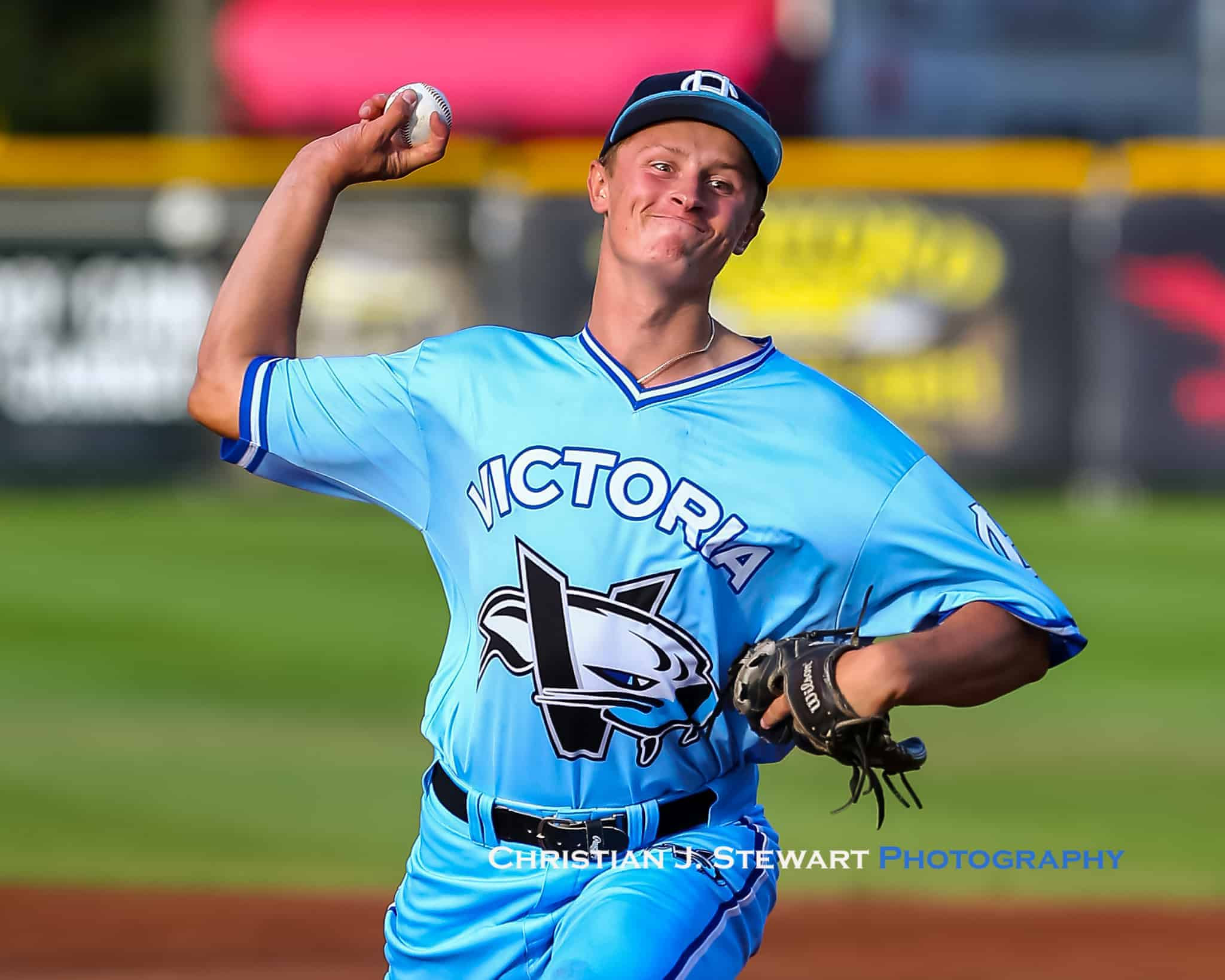 Meanwhile, on the Victoria mound, Josh Laukkanen made his first start since allowing four earned runs and six hits in a 6-5 HarbourCats win in Bellingham on August 4. The righty allowed a walk to Gavin Rork in the top half of the first, but quickly collected two outs before Dylan Cyr lined a single to right field.

Rork then ran through a stop sign from the Lefties third base coach, but was gunned out at the plate by Kyle Sherick to keep Port Angeles off the board.

Three innings later, Port Angeles claimed their first lead of the series with a three-run frame off Laukkanen. 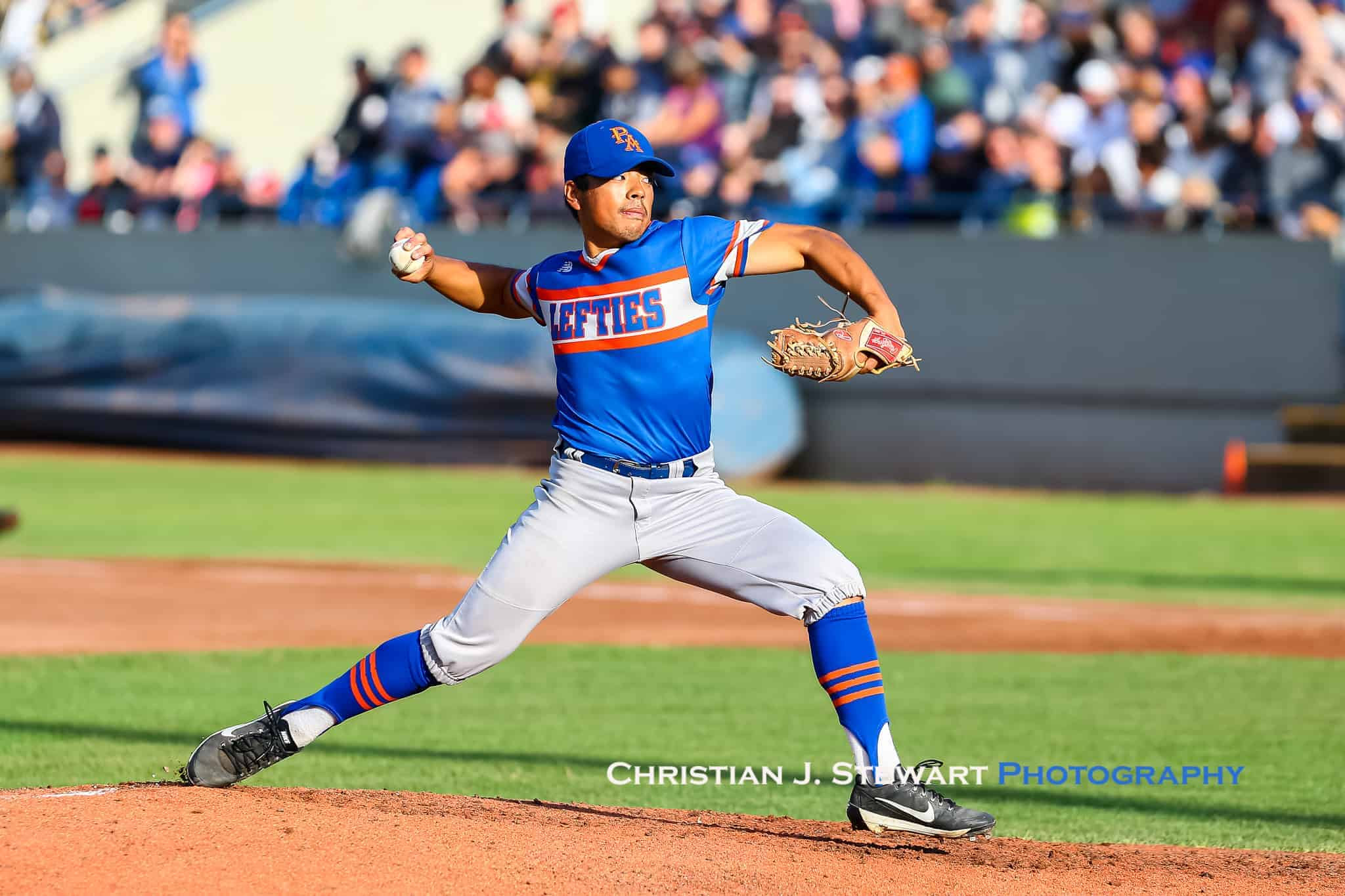 Tyler Tan got the start for the Lefties tonight, and gave up five home runs to the HarbourCats. The righty also collected six strikeouts in six innings. (Photo by Christian J. Stewart)

Laukkanen retired six of seven Lefties in the second and third innings, but Riley Quintin tied the game on a RBI fielder’s choice. One batter later, Rhys De Highden gave Port Angeles the lead with a two-run homer. After getting JJ Valencia to fly out and end the fourth, Laukkanen was pulled. The righty from Cloud County finished with two strikeouts and scattered five hits over four innings.

In the home half of the frame the potent HarbourCats offence, who came into the game averaging 7.7 runs per game, hit a pair of solo home runs to tie the game. Tyson Hays hit the first pitch of the inning from Tyler Tan over the fence, and one out later Kyle Sherick launched his second home run in as many days to level the game at three. 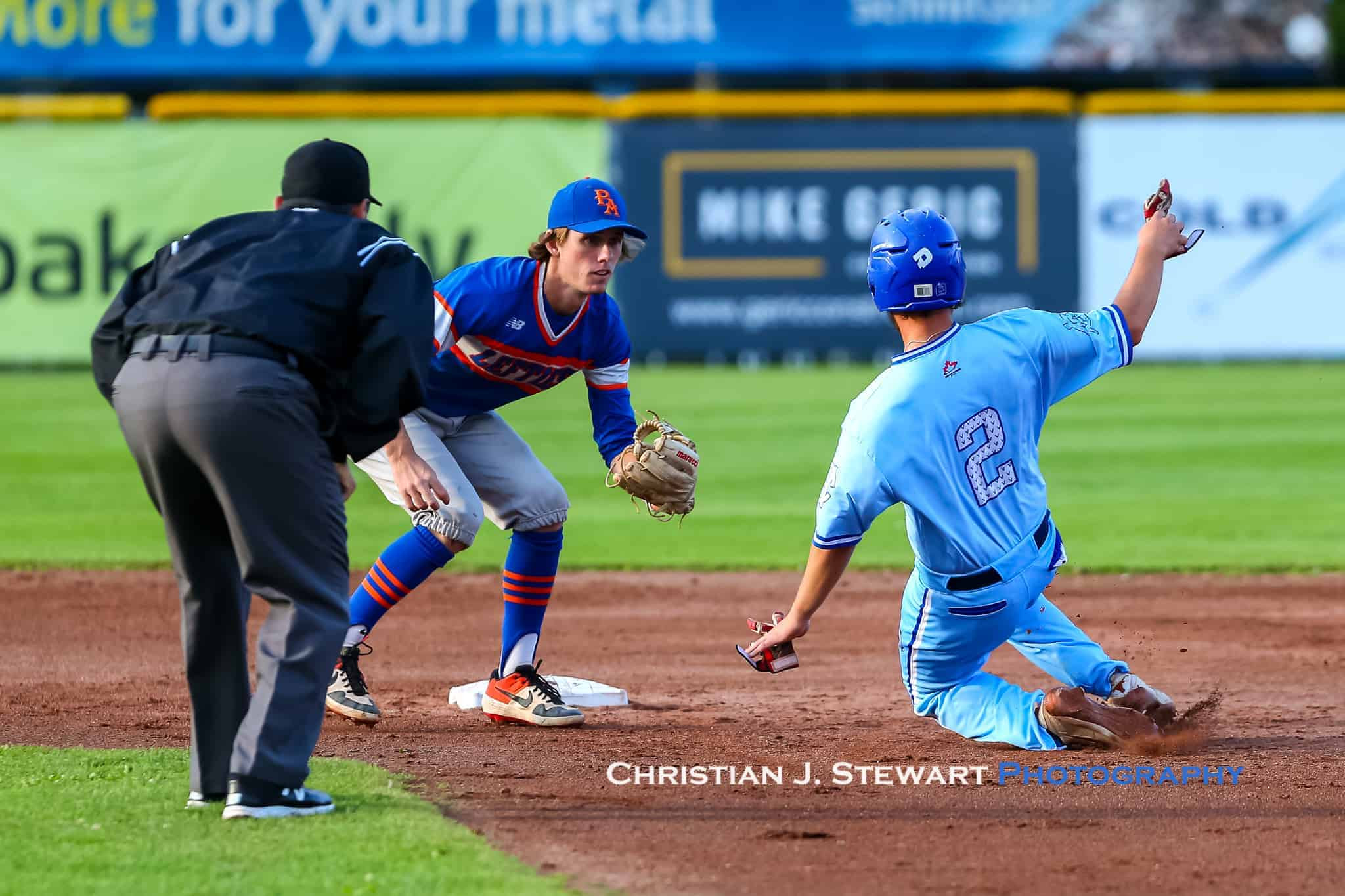 Tanner Haney slides into second base trying to get his seventh steal of the summer, but was tagged out by the Port Angeles infielder earlier in the game. (Photo by Christian J. Stewart)

Following a Carsen Jackson home run in the fifth that gave Port Angeles a 4-3 advantage, Nick Plaia hit the sixth combined home run of the game to once again tie the game.

One inning later, the HarbourCats offence shattered the WCL record as Harrison Spohn went deep to give Victoria their 52nd home run in 2019.

The solo home run also regained a one run lead for the HarbourCats.

In the seventh, Gus Wilson reached first after being hit by a pitch to lead off the inning, and Paxton launched his second home run of the game over the fence to give Victoria two insurance runs, and increase their home run total to 53 on the year. 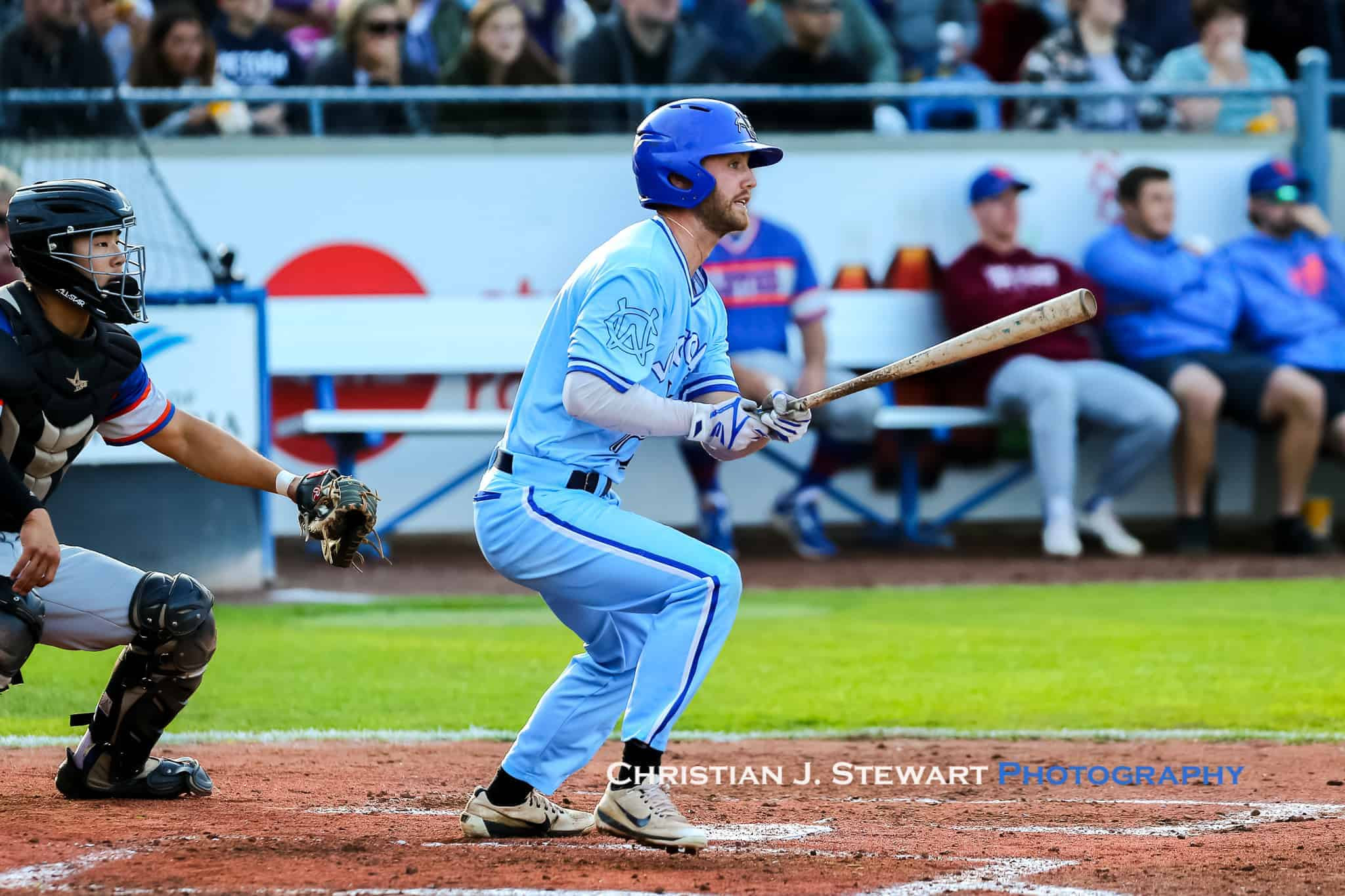 Ty Schindel may not have got a home run, but the San Diego Christian native did have a pair of base hits in tonight’s game. (Photo by Christian J. Stewart)

Tyler Hilton entered the game in the fifth after Laukkanen exited, and allowed just three hits and one earned runs over four innings.

With a three run lead in the eighth, Plaia walked—his 38th of the year—and stole second for his 35th career stolen base as a HarbourCat, which set a new HarbourCats franchise record.

University of Cincinnati native Chase Stewart came out of the bullpen in the ninth, and retired the side to seal Victoria’s 38th victory in 2019.

Victoria clinched the Second Half North division pennant with the win, and will look to conclude the regular season with their eight straight victory in a matinee tomorrow afternoon against the Lefties. First pitch is scheduled for 1:oopm.