It was a playoff-like slugfest for the better part of four quarters and in the end, the playoff-bound Saskatchewan Roughriders moved one step closer to securing a home game for the November tournament. Quarterback Cody Fajardo passed for 224 yards and a touchdown to Kyran Moore while William Powell ran 111 yards and another major to lead the visiting Riders (11-5-0) to a 27-19 win over the BC Lions (5-12-0) on Friday night.

“As much as I don’t want to say it you can just tell that they were fighting for first place and we were out of the playoffs,” said Bryan Burnham after the loss.

“I mean, at the end of the day they did what they needed to do to solidify their place and hats off to them.”

In his first career start, Danny O’Brien struggled at times to move the ball but would hit Burnham for their only major with 2:05 on the clock to give them a fighting chance. This was after he had already come out of the game to give rookie Grant Kraemer his first live reps. only to be pressed back into service when Kraemer went down with what looked to be a serious knee injury on just his second offensive series.

“Field goals instead of touchdowns in the red zone,” said O’Brien of the difference in this one.

“Honestly, I thought we sustained drives a little bit better than last week against a really good defence. We moved the chains and then stalled in the red zone. The defence had a big turnover before the half, I thought we needed to get seven there.”

O’Brien finished the night 16 of 24 for 179 yards and the Burnham touchdown. The missed opportunity in the first half he speaks of came when Burnham made one of his vintage, highlight-reel, one-handed catches in the end zone but just barely landed with his toes touching out of bounds. Instead, they settled for Sergio Castillo’s third field goal of the half to go ahead 9-3. The Roughriders would respond with Powell’s one-yard score and take a 12-9 lead at the break.

“That’s football sometimes, it’s a game of inches. That’s a cliche for a reason,” added O’Brien.

“I thought we fought, gave ourselves a chance to win at the end and just came up a drive short.”

“That’s just the whole tone of the game,” said Burnham.

“If you get seven instead of three on that, it’s a different ball game. That’s disappointing but honestly, I’m proud of the way the offence played today. We didn’t score very much, we didn’t get into the end zone until the very end there but I think the guys battled hard, we played together and Danny did a good job of coming in. (We were) just not on the same page with some things but I like the fight that we gave out there.”

Saskatchewan opened the third quarter by marching down the field and taking a ten-point lead on Fajardo’s touchdown pass to Moore. After that, the home side was chasing.

“Most people didn’t give us a chance and thought it was going to be a rout by 40 or 50 so it just shows the character and the heart of those guys. They’re a prideful group. When you lose the guys that we lost over the course of the year and that type of thing and you lose your leaders on offence or defence and you play an upper-echelon team like Sask. is, you can’t beat yourself.”

Despite the shortcomings on offence, Claybrooks praised the effort of O’Brien and admitted it was gut-wrenching to see Kraemer go down after all he has been through on the practice roster this season.

“It’s tough because the kid worked so hard,” the head coach said.

“He does all the details, all the little things and he’s getting groomed by Mike and Danny. They’re showing him how to be a pro first. He’ll bounce back, he’s a tough kid. I told him while he was laying on the ground ‘you now you’re fiancee is watching so you can’t be crying when I pick you up.’ But he’s a good kid and all my kids are family to me. They’re a resilient group that fights, no matter who is in there.”

Still playing like family, indeed. They will re-group after their third and final bye week of the season and get ready to play host to the Calgary Stampeders on Saturday, November 2nd. They will do everything in their power to close it out on a winning note.

“I wake up every morning grateful of the fact I get to play football,” said Burnham.

“Every kid’s dream, right? That’s really all it takes to motivate me to go out there and play my best.”

4- the number of turnovers committed by the Lions in this one: 3 fumbles and an interception.

0-9- the Lions’ record against Western Division opponents in 2019. 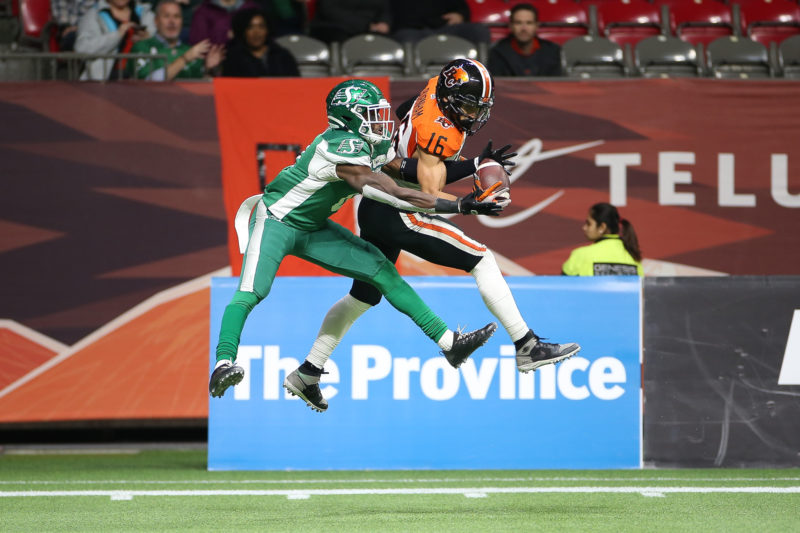 Bryan Burnham. What else can you say? Voters may hold the fact he’s not heading to the playoffs against him but the CFL’s leading receiver proves yet again he should be the Western nominee for Most Outstanding Player.

We spoke again in our keys to the game about the line of scrimmage. The Riders held the edge in that battle and allowed Powell too much running room all game.

Your heart bleeds for Kraemer. A strong camp showing, followed by some fourth quarter heroics in pre-season to earn a roster spot.

The Lions now head into their third and final bye week before wrapping up the 2019 season on Saturday, November 2nd against the Calgary Stampeders at BC Place. It is a 7:00 PM kickoff.