Written by Victor Gouchee-
Always an action packed month on the sports calendar, this July was slated to feature the Olympic summer games in Tokyo, Japan.

As Canada was once again preparing to send over a team of athletes, cereal company General Mills was planning on honouring those athletes by showcasing their pictures on cereal boxes that would be in grocery stores across the country. Due to the global pandemic, the Olympics are one of many events that have been postponed and therefore, so has General Mills’ campaign to celebrate the athletes.

That being said, General Mills has decided to move ahead with honouring heroes on cereal boxes, but instead of athletes, its frontline heroes like Surrey’s own Feezah Jaffer who is the Executive Director of the Surrey Food Bank.

“Who would have thought? I’m not a celebrity,” was Feezah’s initial reaction to being honoured nation-wide. 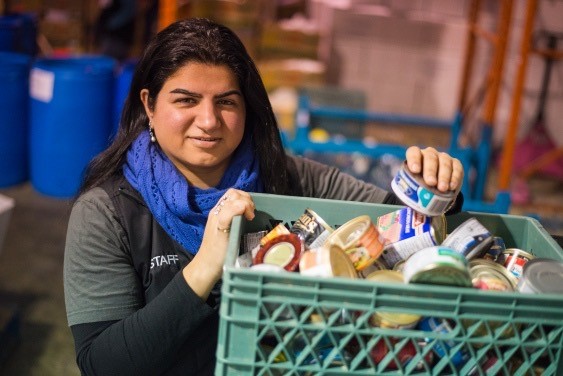 Born and raised in Surrey, BC, Feezah grew up in a home that was stable enough to not require the assistance of food banks. Her parents, however, recognized their financial privilege and encouraged their daughter to help those less fortunate. It was a grade six field trip to the food bank that sparked something inside the young Feezah.

Several years later, and after working in the forensics department of the RCMP, Feezah ventured to Pakistan to volunteer and fulfill her desire to really give back and make a difference. Upon her return to Surrey, Feezah was out of a job, but had a mortgage to pay.

Her passion for giving back lead to her applying to the Surrey Food Bank as a program assistant. Fast forward to now, Feezah is the Executive Director of the Surrey Food Bank and loving her role more than anything she has done before. “Seeing everyone come back, the growth, evolution, the developments and improvements I see in people and in our community, it’s something I hope to keep going.

Duringthis time of uncertainty surrounding COVID-19, many families across Canada have lost their income and are now relying on food banks for their next meals. Some common misconceptions that people have on food banks is that they only serve for the homeless people, and only serve junk food.

“We serve all types of people,” she explained.

“They’re not just homeless, they’re not just less-fortunate, they can be senior citizens, new immigrants and actually 41% are children. We try to give as balanced a diet as possible. We purchase fresh proteins and grains, we use fresh produce whenever possible. It’s an education piece for the community, these people want exactly what you want for your family. We exist so the kids aren’t sent to school hungry, we exist to give balanced meals.”

Feezah is humbled that the cereal box may recognize her specifically, but she knows she would not be honoured if it weren’t for the amazing generosity around her.

“It’s not just about me, it’s recognizing what all of us do. The staff, the volunteers, the communities across BC. The Surrey Food Bank has been serving its community for 37 years and Feezah hope’s this is only just the beginning. “we want to be a facility that moves people out of poverty.

We are growing our education support structures, language, housing and medical support education systems. Said Feezah how the food bank plans to grow its surrounding communities. We also work with RCMP and community centres to better the situation and grow the community out of poverty.”

Feezah would like to thank Purolator, the BC Lions and the support of everyone who has contributed to Purolator Tackle Hunger over the years, but especially during Covid-19, the support has been amazing for everyone at the Surrey Food bank.