Attention all Seattle Kraken fans and hockey lovers: The time is now for a genuine and literal “college try.”

The Kraken’s broadcast territory covers Washington, of course, plus all of Oregon and Alaska and parts of Montana and Idaho. While there are five Western Hockey League Junior A teams in the territory (four in WA and one in Portland) and soon one NHL franchise, the only two Division 1 NCAA men’s hockey teams in Kraken territory are in Alaska. One of those teams, University of Alaska Anchorage, is facing a potential end to its storied 42-year-program.

In fact, six months ago that abrupt ending to UAA hockey seemed inevitable as part of state budget cuts. Media reporters were reminiscing about thrilling games at the 6,000-seat Sullivan Arena-the locals call it the “Sully”-and wistfully recalling the glory years of the early 1990s when UAA made the NCAA tournament three straight years, skating stride for stride with powerhouse programs such as Boston College, the University of Denver, Colorado College, North Dakota and Wisconsin.

But the Save Seawolf Hockey organization is staging a rally any sports squad would be proud of. It has raised more than $1.8 million toward a goal of $3 million (as identified by state budget makers) that will support the program over the next two years while the university, especially the athletic department and coaching staff, develop a long-term plan for the program to thrive financially and on the ice. The team would resume play for the 2022-23 NCAA season. If the effort falls short of the $3 million goal, the program folds, not an attractive option to Alaskans or the Kraken or anyone hoping to grow the sport in the Northwest parts of the U.S.

“Hockey and Alaska have been synonymous for long time, like apple pie and ice cream,” said Greg Myford, the UAA athletic director. “It’s important to the university, community and state that Seawolf hockey continues. The effort so far shows a deep commitment to try to overcome closing down the program. We wouldn’t be in this position without Save Seawolf Hockey and the hundreds of people and businesses who have already supported us.”

There is more work to be done. Since learning about the UAA situation, the Kraken have stepped up, raising more than $150,000 from team and individual investors as a challenge gift. The challenge derives from the team’s intention to make the sport accessible to more players and fans. College hockey is part of the growth chain, which starts with youth hockey, continues with high school and juniors play, then university and professional ranks.

“We are so proud that Alaska is part of our extended broadcast territory,” said Tod Leiweke, Kraken CEO. “We want to be part of the community in Anchorage and throughout the state. 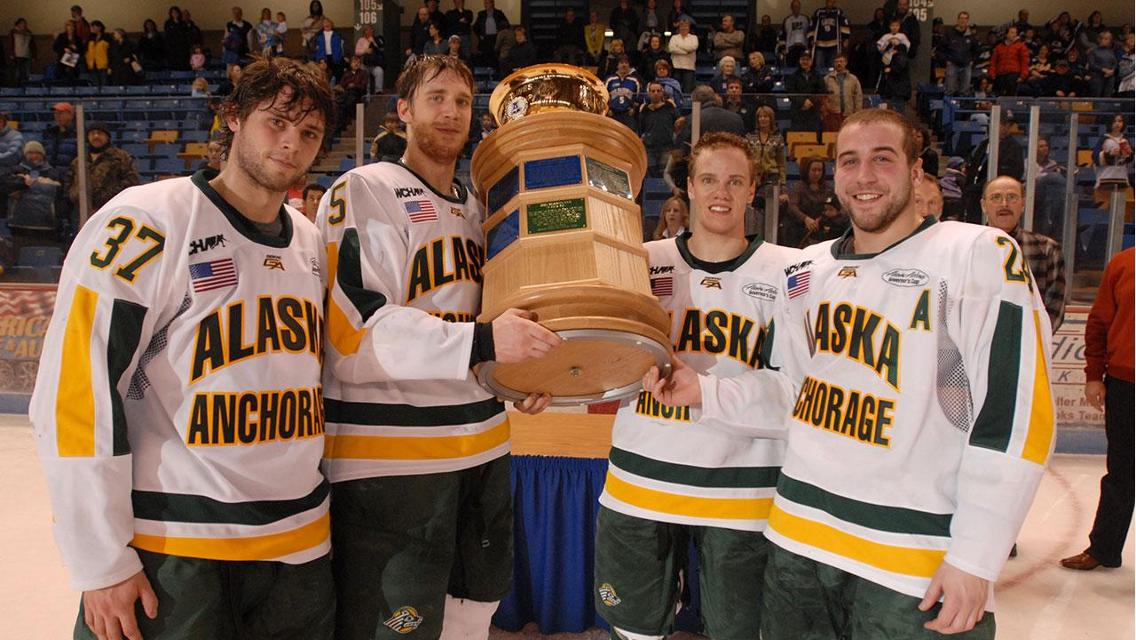 “Hockey is so incredibly authentic in Alaska, which I have visited many times and found it so enchanting. This [challenge gift] won’t be the only thing we do but it might be the most important. We’re asking our fans and others in the hockey and Pacific Northwest business community to step up and join us in this effort.”

Fans can learn more at saveseawolfhockey.com, choosing to donate or join fundraising events such as an upcoming virtual auction. You can even text “UAAHOCKEY” to 41444 to donate. Every dollar is appreciated, says Save Seawolf Hockey leader Kathie Bethard.

“When we announced the program, the first donation was $750,” recalled Bethard. “I was so moved by that. We have had donations from more than a thousand people and businesses, from $2 to $250,000.”

A big reason why the campaign is gaining momentum is the clear and indisputable impact the UAA program and its players have on the community. Jason Metrokin, CEO of Bristol Bay Native Corporation, an influential corporation in Anchorage, grew up attending Seawolf games and said, “all of my youth hockey coaches were former UAA players.”

Metrokin is taking on fundraising efforts with the business community and persuaded Leiweke and the Kraken to consider joining the Save Seawolf Hockey efforts. Leiweke said he was inspired by Metrokin’s lifelong love of the game and giving back to his community, plus Bethard’s enthusiasm and commitment when they met by Zoom.

“Inaction was not an option,” said Leiweke. “We want to be part of the groundswell. It’s pretty exciting to help revive the program.”

Bethard said dropping the hockey program would no doubt adversely affect youth hockey programs and camps in which players donate hundreds of hours each year to volunteer their coaching and mentoring the next generation of boys and girls aiming to play competitive hockey.

“It’s hard to quantify the effect of UAA hockey on the community of Anchorage and across the state,” said Matt Curley, the UAA head coach who played Division I NCAA hockey and has coached juniors and pros in the U.S. (including the USA Hockey National Team Development Program in international play] and Europe. “It’s a 40-year foundation. Players who have worn the jersey have gone to do great things on the hockey side, but also out in the community and even the world.

“There isn’t a boy or girl growing up in Anchorage who hasn’t been positively affected by Seawolf players. Many of our alums have become police officers, fire fighters, small-business owners, executives, all making a difference in the community.”

For some local Seattle youth hockey players, there might be even more direct benefits from saving the UAA hockey program. Part of Curley’s vision for the program is to renew old rivalries with North Dakota, Wisconsin, Denver and a whole bunch of schools in the NCAA-crazed Northeast. University of Alaska Anchorage players would get the opportunity to play in legendary arenas and compete against any number of players who will go on to make NHL rosters.

“I can’t tell you how excited I am about the chance to continue and the [possible] next chapter here,” said Curley. “We want more Alaskans to stay in state and play in our program. We could be a top 10 program if all of our Alaskan young men stayed up here.

“Plus, we anticipate Seattle and the Pacific Northwest to become a hotbed of college recruiting, too, as the Kraken helps grow the game. Believe me, it’s always beneficial to have a relationship with an NHL team. It makes us less of an outlier. Having fans in the greater Seattle region will no doubt motivate our players.”