She knew something was wrong.

Audrey Lacroix didn’t think the problem was physical. Mentally, the butterfly specialist from Pont-Rouge, Que., found herself trapped in a vicious circle.

It was the year before the London Olympics and Lacroix badly wanted to qualify for the Swimming Canada team that would compete at the Games.

The more she worked at making the team, the more impossible the goal seemed. It felt like she was swimming in sand.

“I kind of flew with a broken wing,” the 30-year-old said in a recent interview.

With the help of coach Benoit Lebrun, medical staff, and her teammates, Lacroix was able to face the anxiety disorder that felt like a weight on her shoulders.

This summer Lacroix will represent Canada at both the Commonwealth Games, being held July 23 to Aug. 3 in Glasgow, Scotland, and the Pan Pacific Swimming Championships in Australia. She is swimming with confidence and a smile on her face, a stark contrast to what she was experiencing prior to the 2012 Olympics.

An international swimmer since the age of 15, everything that had come easily for Lacroix suddenly became very hard. She was nervous and anxious before races. Out of the pool she could be irritable. Little things would cause her to “blow a gasket.” There were some days she just didn’t want to get out of bed.

“It was not only swimming related, it was life in general,” said Lacroix. “It was really hard.

“I could wake up one morning and I was fine. I could do everything and take on the world. The next day, it was really a big day for me to go ask for something at the store.”

Lacroix realized she needed help. She turned to her Lebrun and her teammates for support.

“She accepted it,” said Lebrun. “That was the first step to do something about it.”

Lacroix was dealing with anxiety, a mental health disorder that studies show affects about 12 per cent of Canadians. The Canadian Mental Health Association says anxiety disorders seem to be a result of a combination of biological, psychological and other individual factors.

Lebrun and Lacroix met with a doctor. The doctor directed her toward a psychologist. They worked with a strength coach and a nutritionist. Medications were prescribed. As part of the treatment, Lacroix was called Penny during training sessions.

Why the name change?

“Audrey was always failing,” said Lebrun. “It was hard for her to carry Audrey Lacroix all the time. There was always big expectations about her and she was putting a lot of pressure on herself.”

Lacroix explained her condition and treatment to her teammates at the Piscines due Parc Olympique (PPO) club in Montreal.

“She had to go in front of all the swimmers and everyone that was working with her and say ‘I am suffering from this,’” said Lebrun.

It was a difficult period for Lacroix as she came to grips with her life. On the days she stumbled, her teammates were there to catch her.

“I was feeling really vulnerable, especially before qualifying,” she said. “My teammates really helped me.

“Sometimes I could have a really crappy practice. They were the ones that were able to lift me up. They really dragged me through the hard days.”

The treatment and support plugged the leak in Lacroix’s confidence. She realized the goal of making the Olympic team rested in her own hands.

“I had to ask myself if I still wanted to do this,” she said. “I needed to find a new reason to keep on swimming.

“I really wanted to swim at the Olympics. I just wanted to feel good behind the blocks, which was a big deal. That was what the anxiety issue was doing. It was making me feel really not well the day of the race or behind the blocks. I knew if I wanted to realize that goal I would need to be really prepared to work on dealing with my anxiety.”

A few months prior to the London Games Lacroix was five seconds over the qualifying time. At the 2012 Olympic Trials in Montreal, a revitalized Lacroix used a remarkable final 50 metres to win the 200-m butterfly in a qualifying time of two minutes, 9.01 seconds.

“Once I was on the team I was feeling a little bit better,” she said. “I was proud of myself. I could walk with my head up.”

In London Lacroix reached the 200 fly semifinals and finished 12th overall. At last year’s FINA World Championships she just missed the final and settled for 10th.

Dealing with her anxiety gave Lacroix a better understanding of herself.

“I developed some humility,” she said. “I wasn’t as good as I wanted to be, as I used to be. I was still able to show up and be proud of myself. It was a big deal.”

Lacroix joins Canadian athletes like cyclist Gillian Carleton and Olympic medallist Clara Hughes who have spoken out about dealing with mental health issues.

“I try to do my best to make sure people ask for help,” said Lacroix. “I think it would have been an easier road for me if I had been willing to ask for help a little earlier.”

“She is stronger, she has better technique.”

Reaching the podium would be great, but Lacroix doesn’t need a medal to feel good about herself.

“Right now I really appreciate the day when I wake up and feel well,” she said. “I don’t take it for granted.

“I enjoy swimming so much more now that I have overcome this.” 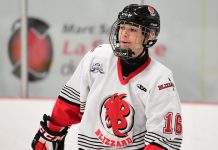