The University of Victoria Vikes women’s basketball team ran into foul trouble and ran out of gas as they dropped their first decision in four games, falling 69-64 against the Calgary Dinos on Friday night at Jack Simpson Gymnasium in Calgary.

With the loss, the Vikes fall to 4-3, while Calgary improves to 5-2. UVic plays at Lethbridge on Saturday at 5 p.m. PST in their final game of conference play in 2011.

The Vikes had a number of players in double-digit scoring with Jessica Renfrew of Victoria and Cassandra Goodis of Penticton, B.C., leading the way with 16 points each. Chelsea McMullen of Prince George, B.C., added 12 points and seven rebounds, with Goodis also picking up seven boards. Sarah Semeniuk of Fruitvale, B.C., added 10 points and five rebounds in the loss.

Jenna Kaye and Tamara Jarrett each had a game-high 19 points for Calgary.

“We just couldn’t get it done, we turned the ball over 26 times and even though we were tied late we ran out of gas,” said Vikes head coach Rich Chambers.

UVic led 20-16 after the first quarter and they continued to lead until late in the second when Calgary took a brief 30-29 edge late in the opening half. The Vikes led 33-32 at the break.

UVic maintained a 46-45 cushion after three quarters, but Calgary got three Vikes into foul trouble in the fourth – Semeniuk, Goodis and guard Debbie Yeboah of Winnipeg – and took a lead late and grinded out the win at the foul line with UVIc trailing and forced to foul. 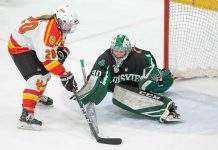 Dinos get their due