The Vancouver Mainland Football League Provincial bantam final was an example why you can never judge a team by its record.

The Bantam Victoria Spartans football team, with 5 wins and 5 losses on the regular season, proved that what seemed to be an improbable outcome at the beginning of the playoffs, defeated the then undefeated North Surrey Tigers 10-9 Sunday afternoon at McLeod Stadium in Langley to claim bragging rights to the best bantam football team in B.C. for 2011.

On a crisp, sunny day, with a partisan Tiger home crowd, the Spartans took the field with a business approach ready to do battle with the leagues most potent offense.  The Tigers would start the game with first possession looking to control the running game by running the ball to on the outside to march down field with two consecutive first down conversions.  After a slow defensive start, the Spartans defense would start to gel stalling the Tigers offense frequently near midfield. The Tigers would take a few unnecessary penalties early, including an unnecessary roughness penalty, to help the Spartans find their stride.

Spartans running back #4 Kevin Garcia shakes off a would be Tiger tackle – Erich Eichhorn image (www.allsportmedia.ca)

With 8:12 left in the half, Tigers #30 would break free and run down to the Spartans sixteen yard line, threating with their 1st points of the game. The Spartans would force the Tigers to kick a field goal wide, coming away with only a single point as the Spartans would be trapped in their own end zone trying to run the ball out, conceding the single for the games first points with 4:47 remaining in the half.  As the Spartans offense sputtered, only gaining marginal ground on the Tigers, it was apparent that the defensive line of the Spartans could only hold tuff against the Tigers offense for so long.  The Tigers, on another conceded Spartans safety would come out of the half leading 2-0.

In what was considered by most to be a lopsided, high scoring game, the second half didn’t prove much other than the underdog Spartans proved that they belonged.  Both teams would hold the other teams offensive talents in check until 8:18 of the 4th quarter when the Tigers #9 would get a crucial block to break out down the sideline for a 52 yard touchdown run, seemingly putting the Spartans out of reach of the win leading 9-0. With 2 minutes remaining Spartans magically found themselves in Tiger territory on the 42-yard line.  Spartans QB #72 Carson Scotney would throw a strike downfield to set up their 1st touchdown of the game and reach within 3 points of the win 1:23 remaining on the clock.

The Spartans would elect to try an onside kick. That, almost prophetic, gamble paid off, as the Tigers could not hold onto the ball and #80 Jordan Worth of the Spartans would recover the ball at the Tigers 42 yard line with 32 seconds left in the game.  The Spartans would run the ball to get within field goal range with time ticking down. The Spartans kicking core would take an untimely time count violation penalty that would set them back further from a field goal with only 1 second remaining on the clock.  Spartans kicker #13 Hugo Louis, coolly, as if done a million times before, would  kick the ball through the uprights as time expired, lifting the Bantam Victoria Spartans  over the North Surrey Tigers to become the 2011 BC Bantam Football Champions. Final score 10-9 Victoria Spartans. 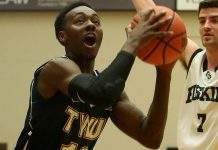