More than bragging rights will be on the line when Canada and the U.S. meet in Sunday’s CONCACAF women’s Olympic soccer qualifying tournament final.

The arch rivals have already qualified for the 2012 Summer Games, but they will still be competing for high stakes — which may mean more later than now.

With a victory, Canada can claim the CONCACAF championship as the top team in the North and Central and Caribbean zone. Although this competition is an Olympic qualifier, it doubles as the zone championship and a trophy will be awarded to the victors.

Sunday’s winner will also earn CONCACAF’s top seed in the Olympics and, at least in theory, have a chance to be placed in a more favourable preliminary-round pool.

However, the pool picks may still be subject to the whims of FIFA under soccer’s governing body’s complicated ranking and points system. Canada won its CONCACAF qualifier for last summer’s World Cup, but still wound up in a tougher pool than the U.S.

Canada, ranked seventh in the world, could also move up in FIFA’s rankings when they are released in March. Although an improved ranking might not hold much sway in the Olympics, it could help Canada get better seedings in future competitions, particularly the 2015 World Cup.

Canadian players view the game mainly as a way to test their mettle against the powerhouse American squad.

“Not too often do you get a chance to play the best team in the world,” said Canadian captain Christine Sinclair, who leads the tournament in scoring with nine goals. “We will absolutely use it as a building block towards London. We might face them in London.”

The U.S. eliminated Canada in the quarter-finals at the 2008 Games in Beijing. Here, both teams rolled to 3-0 records in the preliminary round before Canada beat Mexico 3-1 in one semifinal Friday and the U.S. blanked Costa Rica 3-0 in the other.

The Americans have yet to give up a goal while outscoring their opponents 34-0. Canada has outscored its opposition 16-1.

Canadian defender Sophie Schmidt said the game is “essential” to her team’s preparation for the Games.

“The U.S. is a potential opponent for us in the Olympics, and they’re the best team in the world,” said Schmidt. “So it’s a good tester game to see where we’re at and what we need to do to get to where we want to be come Olympics time.”

More to brag about

Noting that all Olympic opponents will be tough and strong, she called Sunday’s final “more of a pride game.”

So far, the U.S. has had much more to brag about than Canada when the neighbours face each other. The Americans have posted 41 wins compared to three losses and five draws against the Canadians since 1986.

Canada has not beaten the U.S. since March 2001. The last two losses came in two friendlies in September.

With both teams having clinched Olympic berths, U.S. coach Pia Sundhage and Canadian counterpart John Herdman are expected to shuffle their lineups and substitute liberally.

“Some players will start and some [other] players will finish,” said Herdman. “But that’s the beauty of our team. We’ve changed the culture greatly, and players know they have a part to play. We’ve set a contest around people who start games and people who finish games.”

Sundhage is also expected to start a distinctly different lineup than the one that played Friday. She said Canada’s hopes will hinge on Sinclair’s performance.

“The last two times we played against Canada, Sinclair didn’t play, and Canada is a different team with or without Sinclair,” Sundhage said. “Those two games she didn’t play are not going to change the system. I thought we played very well against Canada.”

Sinclair missed the two games because she was on a break following her pro season. She took a hard knock in the first half of Friday’s game, but Herdman does not plan to reduce the risk of further injury by sitting her out the entire game.

“You’ll see Sinclair on Sunday,” said Herdman. “You try and stop her playing in that game.” 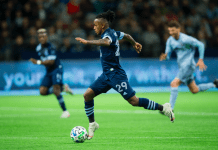